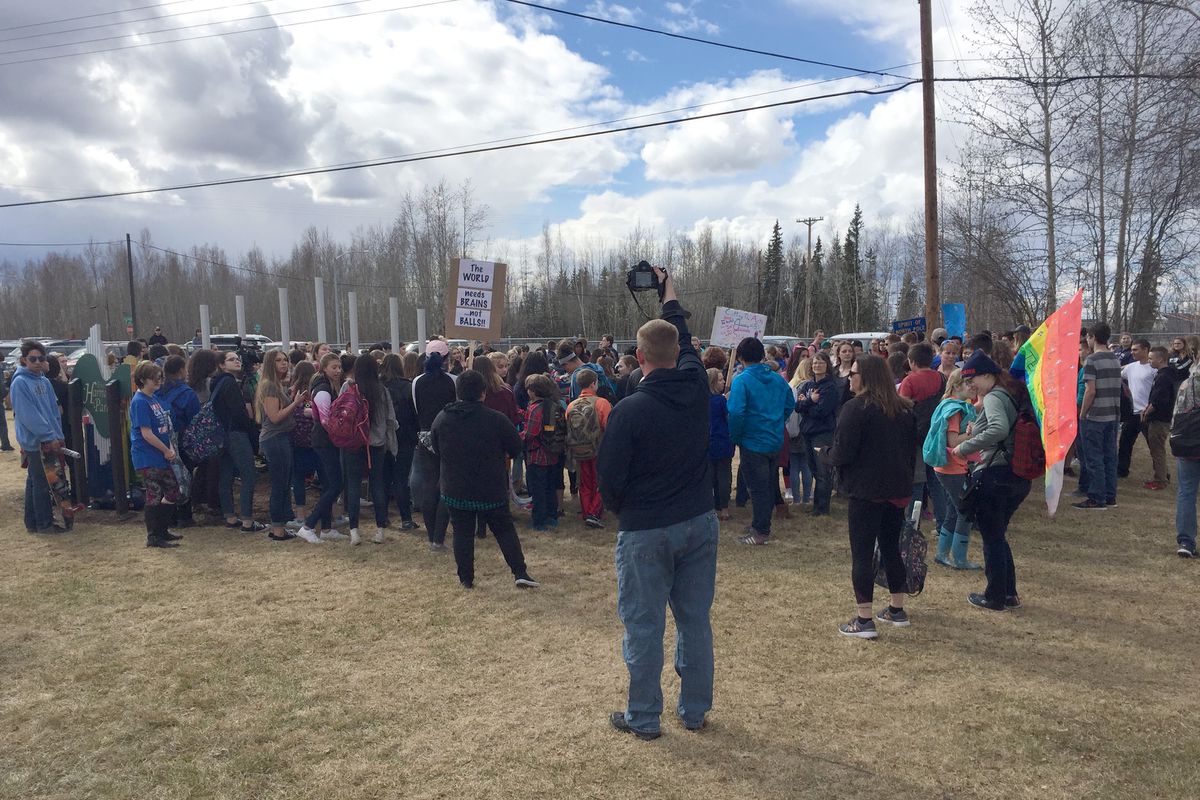 An estimated 460 middle- and high-school students in Fairbanks and North Pole walked out of their classes Friday afternoon to rally against proposed cuts to education funding, according to staff with the Fairbanks North Star Borough School District.

District staff described the walkout as peaceful, organized and unprecedented. They said the students were protesting the elimination of school programs and teacher jobs, particularly in music and arts.

"I've been here nine years and I've never seen anything like this before," Richard Smith, principal at North Pole Middle School, said in a phone interview Friday. Smith said about 150 of the school's 650 students in grades six through eight quietly left the building around 1:30 p.m., some carried signs.

Smith said students notified school staff about the walkout before it occurred. Student organizers at North Pole Middle School had particular concerns about cuts to music and art classes, he said, and wanted to show their support for the programs and their teachers.

"They felt as though their voice wasn't being heard and this would be a possible avenue to get that done," Smith said.

The district's school board has not passed a final budget for the 2017-18 school year, Shaun Kraska, assistant superintendent, said in a Friday interview. Like all Alaska public school districts, it still doesn't know how much state funding to expect, with opposing budget proposals in the state House and Senate.

The House has proposed including the same amount of public school funding as it did in the current budget year, while the Senate has proposed slashing public school funding by 5.7 percent, or $69 million. Kraska said the district prepared budget scenarios for next school year anticipating anywhere from about a $4 million to $14 million budget gap.

Lisa Pearce, Fairbanks schools' chief financial officer, said without a firm budget for next year, the district pre-emptively issued layoff notices at the end of April to all 192 nontenured teachers. Pearce said the district issued the broad notice because of budgetary unknowns.

"I wish I could tell you how many we expect to rehire," she said in an interview Friday. "Without revenue, we don't know."

Sharice Walker, district spokesperson, said students from the middle school met up with about 100 students from North Pole High School at a local park Friday afternoon.

They chanted, sang and played instruments. A video of the protest showed students singing "Do you Hear the People Sing?" with tuba accompaniment. Photographs showed students holding signs that read, "Save our teachers."

"There were students who felt very passionately about the class offerings at their schools and were worried about potential cuts to music, to the arts, to other classes," Walker said of the walkout.

Jackson Brannan, a 16-year-old sophomore at West Valley, walked out of his chemistry class at 1:30 p.m., 45 minutes before the end of the school day.

He said in a phone interview Friday he and other students walked around the nearby track for at least 30 minutes. They chanted, "Save our schools." Some carried signs.

"A lot of these kids get into music because they have a passion for it and I feel like taking away the music program is basically crushing their dreams," he said.

Brannan has played the clarinet for about a decade and said he attends school board meetings, where he heard about the grim state of the budget.

Kraska, the assistant superintendent, said some students from Lathrop walked over to the district's administration building Friday to speak with the CFO about funding and layoffs.

At North Pole Middle, principal Smith said some parents arrived at school to help students cross streets and walk to the nearby park. He said police were also there "to make sure kids were safe."

Kraska and Smith said teachers did not attend the walkout. Kraska said the walkout was not a school-sponsored event and "was created specifically by a group of students."

She has worked at the district for 28 years and said the protests Friday were "probably the first walkout I've ever seen by students for something like this."

Smith said the walkout provided "a teachable moment about standing up for what you believe in and finding a way to do it safely and appropriately."

"It gives us an opportunity to talk about what it means to have freedom of assembly," he said.