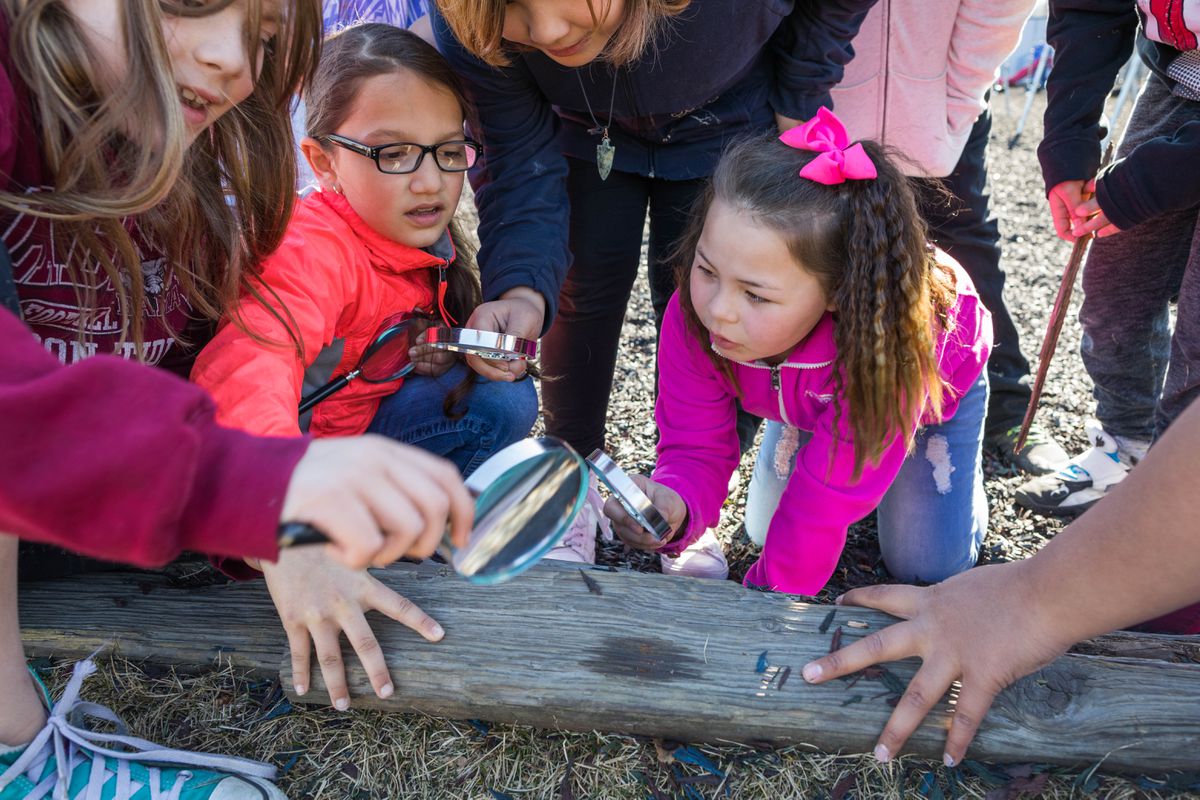 Campbell Elementary third-graders Bella Atkins, left, and Aiyana Simpson use magnifying glasses to look at insects along the edge of their playground on Friday, May 5, 2017. (Loren Holmes / Alaska Dispatch News)

Campbell Elementary third-graders Bella Atkins, left, and Aiyana Simpson use magnifying glasses to look at insects along the edge of their playground on Friday, May 5, 2017. (Loren Holmes / Alaska Dispatch News)

First-graders from Anchorage's Campbell Elementary School scoured a nearby park earlier this month to recover two "critter cameras" they had strapped to trees to discover what animals moved through the wooded area at night.

Meanwhile, on the stretch of grass behind the school, third-grade students used magnifying glasses to inspect objects found in the playground area, taking measurements with rulers and recording their observations in journals.

Both of the lessons were rooted in the local community, an aspect of "place-based learning" that the school plans to expand on in the fall when it transitions from a typical neighborhood school into the Anchorage School District's first STEM elementary school, said principal Michelle Johansen.

"It took us a lot of time to do this. We worked on it for over a year and it was really a grass-roots effort," Johansen said. "We have a lot of teachers and staff in my school who are very interested and also very proficient in STEM."

STEM stands for science, technology, engineering and math, and teachers will weave the four subjects into students' days next school year, Johansen said. Another cornerstone of the soon-to-be revamped school is "integrated learning," she said. Instead of teaching subjects like language arts, math and social studies in silos, teachers will integrate numerous subjects into project-based lessons.

"We know it's the best way for kids to learn," Johansen said. "They get excited about it. They're motivated."

The school started moving toward placed-based and project-based learning this year, she said. For Kelsey Deiman's first-grade class, that meant when she taught a lesson about deep sea creatures her students read about them, wrote about them and then created models of the animals.

"But first they had to come up with blueprints," she said about incorporating the engineering and design process into the lesson.

The Anchorage School District will add Campbell Elementary to its list of about 20 alternative schools next school year, said Darrell Vincek, district director of charter schools and alternative programs.

Campbell Elementary sits near the intersection of Raspberry Road and Minnesota Drive and will continue to serve as the neighborhood school for students in kindergarten through sixth grade who live in that area. If there's room, students who live in areas zoned for other schools can also attend Campbell STEM, asking for placement through the district's school lottery, Vincek said.

Johansen said Campbell Elementary enrolled about 340 students, about 75 percent of its capacity. About 100 students zoned for the school attend someplace else, she said. "We're hoping to get them back."

School Board President Tam Agosti-Gisler described alternative schools as "a neighborhood school with a special flavor." Vineck said alternative programs still focus on state education standards and the school district's long-term goals, but "take a different route getting there."

When asked what she thought about the STEM school, first-grade teacher Lee Cummins shot up her arms and cheered. Cummins and Deiman both said the transition meant spending more time at school planning lessons and curriculum, but the excitement for the new model trumped the extra work.

"Instead of just randomly writing reports, we can write reports about something we're actually studying," Cummins said. "It leads to much more authentic learning."

The school sent parents a survey in the fall asking if they supported Campbell becoming a STEM school and only four responded "no," Johansen said. She said follow-up questions indicated those parents didn't support the change because they falsely assumed it would require their children to enter the lottery to attend the school next year.

Jessica Wuttke-Campoamor, mother of one sixth-grader and one fourth-grader at Campbell, said in an email that she supported the school's proposal to become a STEM school, and underscored the importance of students learning science, technology, engineering and math.

"As a community, state and nation, we need to promote education, especially in areas that will allow us to compete internationally," she said.

As Johansen walked through the school's halls in early May, she pointed to a sign that read "Keep Calm and Science on," the lettering made from elements on the periodic table.

She pointed to another bulletin board covered in blueprints that students had drawn to show what they wanted the school's new STEM laboratory to look like. Johansen said she hopes to have the lab outfitted next school year. It will have laptops, microscopes, building materials and areas for students to sit and collaborate on engineering projects.

This month, Campbell Elementary celebrated its 50th anniversary and ushered in a new era, she said. The school held a silent auction and sold T-shirts, student art and baked goods, raising about $5,000 in donations for the lab — about a quarter of the way to its fundraising goal.

"This is the perfect segue to the next 50 years," Johansen said. "It's kind of saying goodbye to the way we used to do things and embracing the future of where we're going in the next 50."