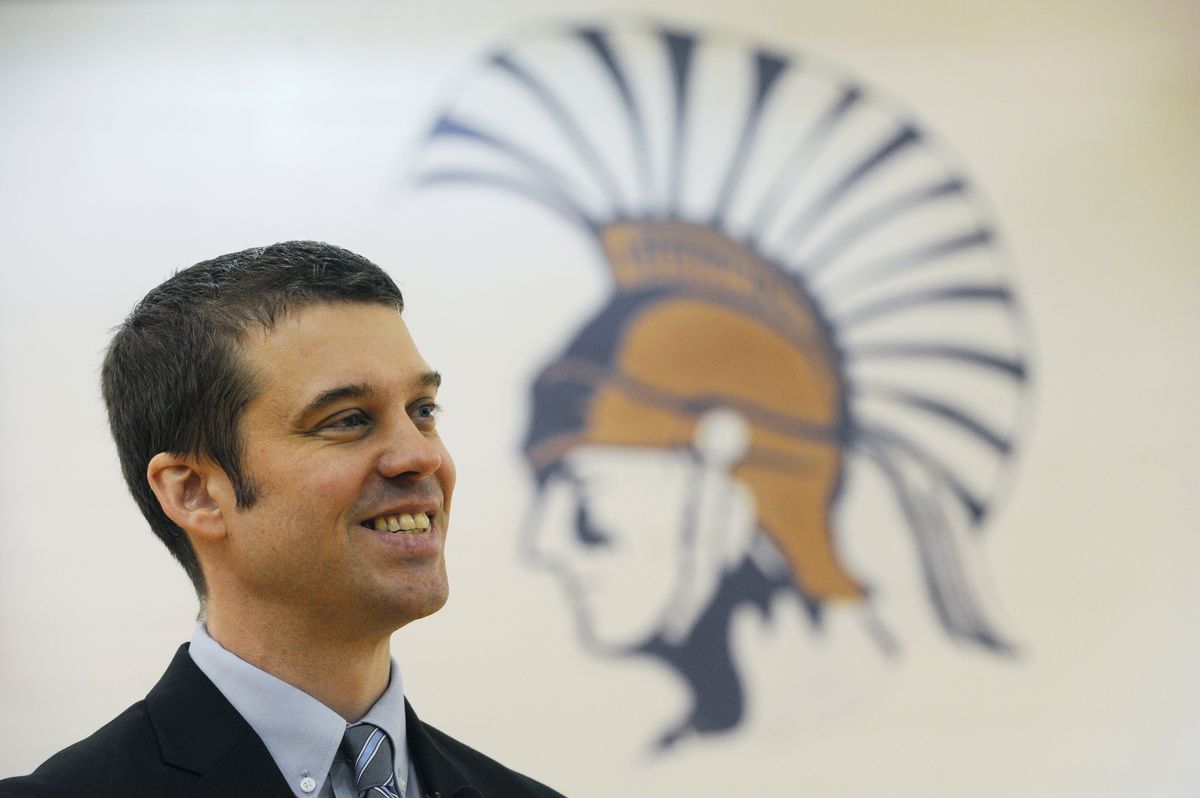 Ben Walker teaches seventh-grade science in the same Romig Middle School classroom that his mother once did.

For 11 years, his wife taught science in the classroom next door.

And on Thursday, Walker earned the highest teaching honor awarded by the Alaska education department.

Alaska Education Commissioner Michael Johnson named Walker the 2018 Alaska Teacher of the Year at a surprise, school-wide assembly Thursday morning at the West Anchorage middle school in front of a crowd of energetic students, co-workers and family members, including his two children, who clapped and cheered in response to the news.

"You are an amazing teacher," Lia Boxler, a seventh-grade student, told Walker during the assembly.

"From day one, you've always pushed us to do our best," she said, standing in front of her peers in the school gym. "You always come up with new and creative ways to keep us engaged in science. You also like to make jokes to keep us smiling and make learning more fun."

He grew up in Ketchikan and moved with his family to Anchorage as a high school student, graduating from Dimond High in 1994.

"I wanted to do something that was a little more meaningful in my life," he said about his decision to teach.

Walker said he strives to make science exciting, weaving hands-on activities into his lessons. His students recently collected water from around the city, inspected the samples under a microscope, found microorganisms and classified them into different kingdoms.

"Instead of just saying, 'This is taxonomy. This is how we classify things,' " he said, "we say, 'Let's get some real things, let's bring them in and classify them.' "

Walker said he wants to create "STEM literate citizens," referring to the acronym for science, technology, engineering and math. He has taught electives at Romig including media technology and robotics.

He said his favorite part of the job is interacting with students.

His boss, Romig Principal Carrie Sumner, praised Walker for his ability to connect and support both students and his colleagues, referring to him as a "kid whisperer" who is adept at science.

"He is the kindest soul," she said during the assembly.

Walker's wife, Catherine, described her husband as "the best mentor I've ever seen."

She said he makes curriculum relevant to students, incorporating items into lessons such as drones and devices that students can clip onto their cellphones to turn them into microscopes.

Each year, the Alaska Department of Education and Early Development accepts nominations for the Teacher of the Year award. This year, 24 teachers were nominated. A committee of five, including last year's Alaska Teacher of the Year, James Harris of Soldotna, and the president of the Alaska PTA, selected Walker from a pool of four finalists. Commissioner Johnson accepted the recommendation.

Walker will serve on Johnson's Teacher Advisory Council. He is also now in the running for the national Teacher of the Year award as Alaska's official nominee.