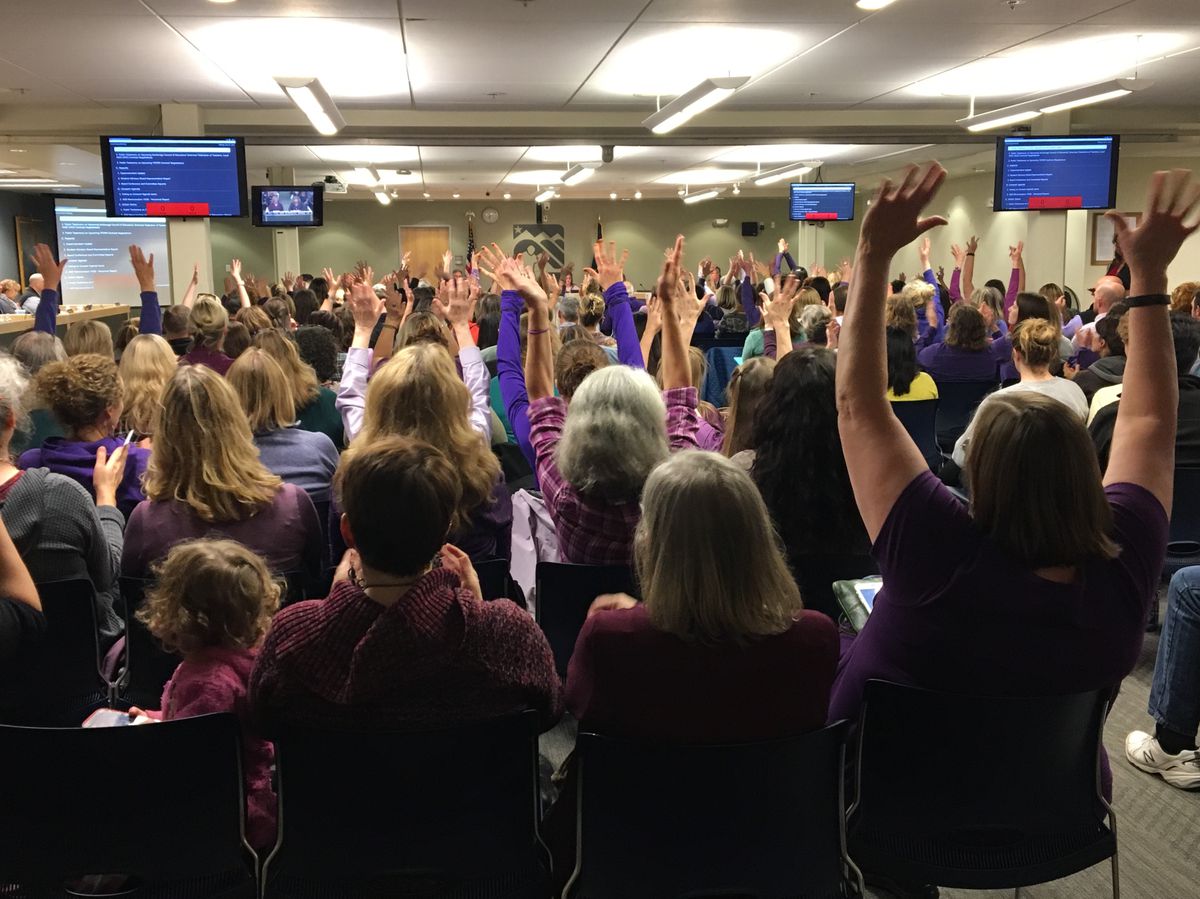 Anchorage educators silently cheer during a School Board meeting on Sept. 25, 2017, as teachers tell the board members about their frustrations, including increasing class sizes, new curriculum and the lack of a contract. (Tegan Hanlon / ADN)

Anchorage educators silently cheer during a School Board meeting on Sept. 25, 2017, as teachers tell the board members about their frustrations, including increasing class sizes, new curriculum and the lack of a contract. (Tegan Hanlon / ADN)

The Anchorage School District and the local teachers union have reached another tentative one-year contract agreement, after teachers rejected an earlier version of the proposal, the district announced Friday.

The Anchorage School Board and the teachers themselves still must ratify the tentative agreement before it takes effect.

The newest contract proposal is largely similar to the one the teachers union shot down in November, though it does include new clarifications about some items including planning time, which teachers requested, according to district officials.

Like the rejected contract proposal, the latest tentative agreement does include pay increases based on changes in teachers' experience and education, according to the district. It includes two additional personal days for teachers, bringing the total to five. It also increases the district's monthly contributions to health insurance premiums by $65, bringing that total to $1,645 per person per month.

However, the proposal still does not include the overall 3 percent raise the Anchorage Education Association teachers union asked for.

After teachers rejected the previous contract proposal in November, Tom Klaameyer, Anchorage Education Association president, said some members took issue with the double-digit raises given to some district administrators, while teachers were denied the 3 percent raise.

Members of the teachers union will vote on the tentative agreement Feb. 13-16.

Currently, the more than 3,300 members of the Anchorage Education Association teachers union are working without a contract after their agreement expired last June.

If approved, Friday's tentative agreement would expire June 30, 2018. It would take effect retroactively.

Klaameyer said he expected the union to post the proposal online Monday, and he could comment on it then.