‘It was a surprise to everyone': What the proposed $20 million education cut could mean for Alaska schools 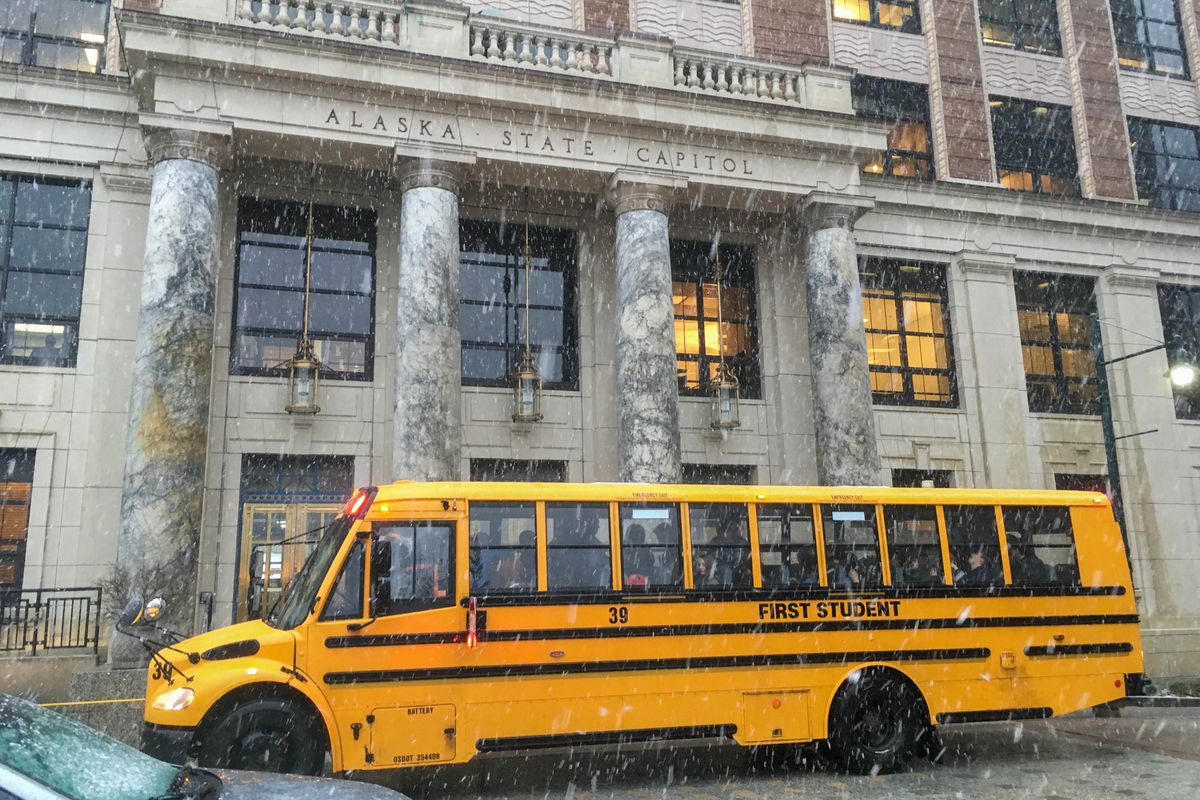 A school bus picks up students after they toured the Alaska State Capitol on Tuesday, Jan. 29, 2019. (James Brooks / ADN)

A school bus picks up students after they toured the Alaska State Capitol on Tuesday, Jan. 29, 2019. (James Brooks / ADN)

Gov. Mike Dunleavy’s proposal Monday to cut $20 million in education funding in the middle of the school year sent shock waves through Alaska’s education community, in part because that money is already being spent in school districts' current budgets.

The cut was revealed in a supplemental budget proposal introduced in the Alaska Senate. The state House and Senate must approve the funding cut before it would take effect. It’s unclear if there’s any appetite among state legislators to reverse last year’s funding decision.

Several school district officials said in interviews Tuesday that they were surprised by the proposed cut. While they brace for year-to-year changes to state funding, they said, they didn’t expect a proposal to remove funding mid-year. That money is already allocated to costs in the current school year’s budget such as teacher salaries, district officials said.

“I think it was a surprise to everyone,” said Dan Walker, superintendent of the Lower Kuskokwim School District headquartered in Bethel. “I had texts from a number of colleagues from around the state saying, ‘Hey, what’s going on here?’”

The Dunleavy administration wants to follow the state’s school funding formula, Donna Arduin, director of the state Office of Management and Budget, told members of the Senate Finance Committee on Tuesday.

That $20 million is above what that formula requires, she said. It has not yet been paid to school districts, according to Lacey Sanders, budget director in the Office of Management and Budget. It was scheduled to be distributed in late January or early February.

But school district officials said they budgeted for their portion of the $20 million last year, after the state lawmakers agreed to the funding. The current budget year started July 1, 2018.

The $20 million is on top of the $1.2 billion in state money allocated to the schools under the state funding formula.

The proposal to cut the $20 million undercuts bipartisan work by last year’s Legislature, said Lisa Parady, executive director of the Alaska Council of School Administrators. It also strips away the stability lawmakers tried to create by forward funding schools, she said.

“The school year is over halfway through, and pulling the rug out from school districts at this point really undermines the compromise that the Legislature put in place to do just the opposite, which was to support stability in school districts,” she said.

School district officials in Anchorage, Fairbanks, Bethel and on the Kenai Peninsula said losing their slice of the $20 million would equate to roughly 1 percent of their operating funds in the current school year.

“It doesn’t seem like a lot,” Walker said. But, he said, "It’s money that’s already appropriated. It’s already been budgeted and we’re paying teacher salaries and things like that out of it. So it would leave us hanging in a pretty precarious spot.”

The Anchorage School Board had already put about half of the money toward a new three-year contract with the local teachers union. It used the rest to bring back 25 classroom teaching jobs, said board president Starr Marsett.

Anchorage school leadership was meeting Tuesday and Wednesday to discuss potential options if state lawmakers approve the cut, Anderson said. By state law, the school district can’t lay off teachers in the middle of the school year.

Marsett, Walker and Tim Parker, president of the NEA-Alaska teachers union, also said Tuesday there were concerned about how the proposal would affect teachers’ decisions to stay in Alaska.

“Teachers have this very small window where they are deciding what job to get for the next year, and the window just started right now and it goes for about another two or three months,” Parker said.

“If the message from the state is, ‘We’re not sure we’re going to be able to fund education in the future,' if you were in your first couple years of teaching, why would you stay? That’s a really difficult prospect, to think you could easily get a pink slip," he said.

"They’ve already spent some of the money and hired people,” he said.

Senate Democrats criticized the proposed education cut in a statement on Tuesday.

“School districts throughout the state plan their budget in the spring and finalize those budgets after we conclude our budget process, and this is a direct threat to Alaskans' trust in government,” Sen. Scott Kawasaki, D-Fairbanks, said in the statement.

Dunleavy proposed two supplemental budget bills on Monday: One devoted to disasters, primarily the Nov. 30 earthquake, and the other to items including the education funding cut. The increases in the proposals “are offset by savings from efficiencies and reductions to appropriations that the State cannot afford,” said a statement from the Dunleavy administration on Monday.

“I took office with a promise to reduce State spending, put public safety first, and renew trust in government. To that end, I am presenting a supplemental bill for the Legislature’s consideration that returns money to the general fund,” Dunleavy said in the statement.

Dunleavy’s press secretary did not respond to a question Tuesday about why the governor decided to propose the $20 million school funding cut.

At the Matanuska-Susitna Borough School District, the cut would mean a loss of roughly $2.6 million, according to information from the Alaska Department of Education and Early Development.

The local school board and assembly approved the district’s current operating budget in spring 2018, and then contracts were issued to teachers for a full year of work, Monica Goyette, district superintendent, said in a statement on Tuesday.

“These contracts must be fulfilled regardless of mid-year revenue changes," Goyette said. “Beyond the budget reductions that would need to occur for this school year, these cuts will have ramifications moving forward by creating fiscal uncertainty in future years.”

At the Kenai Peninsula Borough School District, the cut would mean a loss of about $1.4 million. The district has already used that money to bring back 11.5 full-time teachers and pay support staff this school year, said Pegge Erkeneff, district spokeswoman.

At the Fairbanks North Star Borough School District, the cut would mean a reduction of about $2 million. Fairbanks Superintendent Karen Gaborik said she would wait until the budget conversations moved forward in Juneau before planning for a possible cut. She didn’t want to pass stress onto schools and teachers for a proposed cut that, she said, she never expected.

“It took me a couple conversations to realize they were talking about this year,” Gaborik said. “It makes no sense, especially coming from somebody who was an educator himself, it makes no sense to me. I mean, he knows how school districts work."

Dunleavy has worked as a teacher, principal and superintendent in Alaska.

District officials are currently working on their budgets for next school year.

The Anchorage School District has to present its 2019-20 school year budget to the Anchorage Assembly by the first Monday in March, Anderson said.

Anderson said he was building next school year’s budget proposal based on the assumption that the district would receive its portion of the $30 million in state funding because that’s what’s in state law. Gaborik said the Fairbanks school district was also factoring the number into its budget planning.

“You have to go with the numbers you have,” she said.

Some district officials also expressed concern Tuesday about state funding for next school year. Feb. 13 is the deadline for the governor to deliver his final budget proposal to the Legislature for the next budget year.

“My fear is what Feb. 13 is going to bring when the governor announces his budget,” Marsett said. “I really feel like this might be a prelude, really preparing us for more budget cuts.”