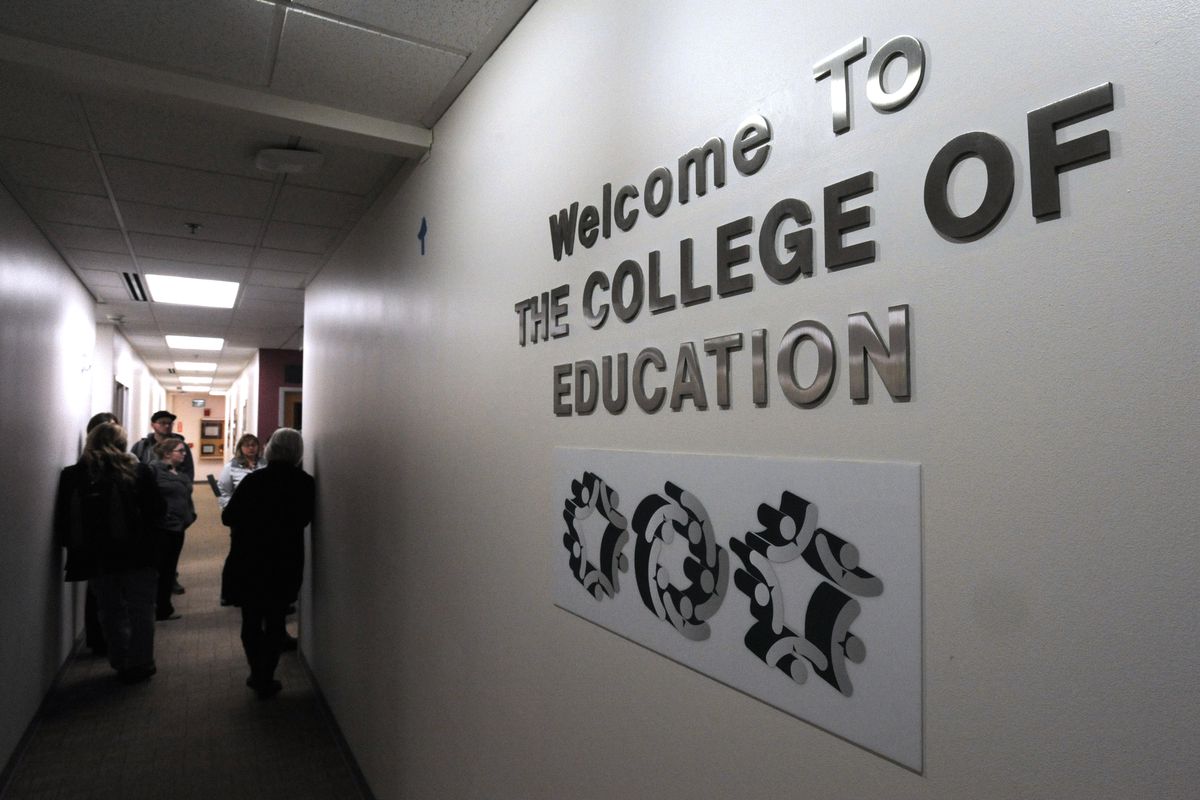 University of Alaska President Jim Johnsen has recommended discontinuing initial teacher preparation programs at the University of Alaska Anchorage this year in the wake of accreditation loss. He plans to also recommend eventually closing UAA’s entire School of Education, the largest education school in the state.

“The goal is to have it look the same as it does now to the students at UAA,” said Paul Layer, UA vice president for academics, students and research. “The difference is that they would not necessarily be in a UAA program, they’d be in a UAF or UAS program.”

Johnsen is recommending that regents discontinue the UAA teacher preparation programs effective Sept. 1 of this year and close the education school by July 1, 2020.

The future of UAA’s education school will ultimately be decided by the UA Board of Regents, the governing body of the state’s public university system. The regents are meeting Monday to decide whether to discontinue UAA’s teacher preparation programs, which prepare students to get their first teaching licenses. About 335 students are currently enrolled in the programs, Layer said.

Regents are expected to discuss in May whether to entirely shutter Anchorage’s education school — the state’s largest preparer of teachers for Alaska’s public K-12 schools. That would mean also discontinuing about a half-dozen other education programs that weren’t affected by the accreditation loss and that currently enroll roughly 155 students. University officials would assess proposals to integrate or transfer those programs, said Johnsen’s recommendations report posted online this week.

Johnsen’s recommendations follow months of uncertainty for UAA’s hundreds of aspiring teachers who in January found themselves suddenly enrolled in unaccredited programs.

The news came Jan. 11 that a national oversight body, the Council for the Accreditation of Educator Preparation, had revoked accreditation for UAA’s seven teacher preparation programs. The programs failed to meet four of five accreditation standards, according to CAEP.

Alaska regulations require teacher preparation programs have national accreditation or “substantially meet” the standards. Without accreditation, UAA students’ path to licensure became much less certain, and the university’s graduates need a license from the state to teach in Alaska’s public schools.

[‘Aren’t we worth it?’: UAA education students grill administrators over loss of accreditation]

The regents directed Johnsen in March to conduct a review of UAA’s teacher preparation programs to inform their decision about what to do next. The decision ultimately comes down to whether or not to reapply for CAEP accreditation.

Pursuing re-accreditation will likely take up to three years and “require a significant commitment of resources, attention, and commitment by UAA School of Education faculty and leaders,” said Johnsen’s recommendations to regents.

In the meantime, the Alaska State Board of Education and Early Development would have to continue approving the programs and licensing their graduates.

UAA Chancellor Cathy Sandeen wants the School of Education to reapply for CAEP accreditation for its teacher preparation programs. The UAA Faculty Senate has also passed a resolution in support of pursuing re-accreditation.

“I have complete confidence the school’s faculty would successfully achieve accreditation based on the significant progress they have made toward compliance with CAEP standards,” Sandeen said in a written statement. “I also have faith the Alaska State Board of Education and Early Development would continue to provide a path to licensure for our students, even as we are seeking accreditation.”

If the regents accept Johnsen’s recommendation, Sandeen said, UAA will work with UAF and UAS to transfer its students. According to an online FAQ by university officials, UAA students would not have to pay transfer costs. If it’s determined students need to retake courses, UA would cover that tuition.

Maria Williams, president of the UAA Faculty Senate, said she has concerns about what discontinuing UAA’s teacher preparation programs would mean for the local workforce. She expects it would result in fewer teacher graduates as more students decide to go out of state to pursue their degrees. Already, more than half of Alaska’s new teachers come from out of state.

If the regents decide to end UAA’s teacher preparation programs, Layer said, the students could take UAF and UAS classes in Anchorage, either online or with a faculty member on the Anchorage campus. Those faculty members would teach in Anchorage, but be employed by UAF or UAS.

The UAA teacher preparation programs have equivalent degree programs at UAF or UAS with the exception of the early childhood education programs, Layer said. UAF has put forward a proposal that would fill that gap and also lead to the same licensure, he said.

In fall 2018, UAA enrolled about 50 percent of UA’s education majors across all programs compared to about 28 percent at UAF and 22 percent at UAS, according to Layer.

Layer said there would be advisers based in Anchorage for the education students. The university students could also continue student teaching at Anchorage-area schools.

Other details still had to be worked out, Layer said. That includes how many education faculty and staff would be located in Anchorage. Currently, the UAA School of Education has about 23 faculty members and eight staff members, including the interim director, he said.

“I don’t have the final numbers yet, but it is likely that some of the programs will share faculty,” Layer said. “There is some potential for cost savings.”

In the online FAQ, university officials said the cost of reapplying for accreditation and the efficiencies from consolidating programs were being considered, "but budget is not the only determining factor.”

“The high quality of UAF and UAS programs is a factor as is the risk associated with keeping education programs at UAA without a sure path to initial licensure for program graduates,” it said.

Regents were still digesting Johnsen’s recommendations Thursday, said John Davies, Regents chairman. The board is focused on making a decision that’s best for students, he said. That includes students having access to an accredited, high-quality program delivered in Anchorage.

“I think that’s the least disruptive for the students,” Davies said.

The UA Board of Regents is meeting by video conference from 1:30 p.m. to 5:30 p.m. on Monday. If regents approve Johnsen’s recommendation, the director of UAF’s School of Education will hold a student forum in Anchorage the following Friday, according to a UA spokeswoman.