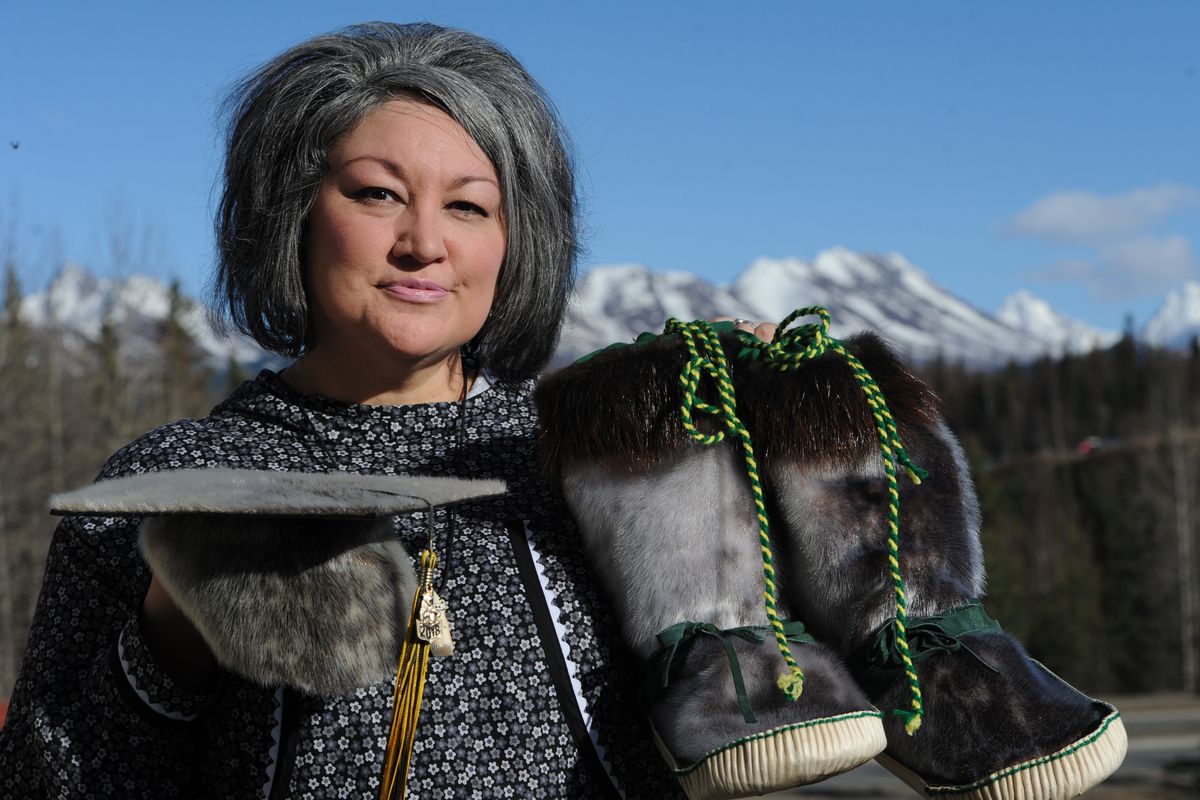 His mother, Jacqueline Morris, had the cap made for her son, who is Yup’ik and Inupiaq, so he could carry his culture and honor his ancestors as he received his diploma.

But there were obstacles on the way to the stage.

Andrew needed permission from the principal ahead of time to wear the sealskin cap and, even then, a staff member at graduation asked him to take it off right before the ceremony started, Morris said. It took another call to the principal to check permissions before Andrew could get his diploma, with the sealskin cap propped squarely on his head, his sealskin stole draped around his neck and his sealskin mukluks on his feet.

It meant a lot to Andrew and his family, Morris said, but “it was an uphill battle all the way."

The battle has played out in other states, too, as students try to incorporate traditional regalia, such as feathers and beaded caps, into their graduation ceremonies, sometimes butting heads with dress codes.

Morris, an affable 49-year-old mother of four, said she didn’t want her younger daughter and future grandchildren to have to fight to wear their Native regalia at Anchorage School District graduation ceremonies.

So with the help of her family and the district’s Native Advisory Committee, she started pushing for change. Nearly a year later, she got it.

“I think we have one of the most diverse school districts in the country and really, for us, I think it’s important to recognize that,”said Kersten Johnson-Struempler, the district’s senior director of secondary education. “I’m excited to see how students express themselves at graduation this year.”

Before, high school principals generally oversaw enforcement of graduation guidelines, with the goal of maintaining a respectful and non-disruptive atmosphere, Johnson-Struempler said. That usually meant students couldn’t alter their caps and gowns, but there wasn’t a districtwide policy.

“We didn’t want cuss words or symbols that offended people, so we were pretty strict about it for that reason,” Johnson-Struempler said.

The new regulation comes with limits. Students can’t replace the standard, school-issued cap and gown. Any adornments can’t include letters, numbers or written phrases, according to the regulation. Students must also provide the district with a written notice by May 1 about what items they plan to wear.

Morris and other advocates of the new regulation said they’re happy to see progress made.

Morris played a “huge role” in getting the new regulation approved, said Johnson-Struempler.

“I think she’s done all the right stuff,” she said. “What I appreciate about her advocacy is it’s not just about her kids, it’s about the Alaska Native community.”

On a recent weekday evening, Morris and her 16-year-old daughter Nyché Andrew, a sophomore at Service High, sat at their kitchen table in South Anchorage, recounting the past year of work.

After the 2018 graduation ceremony, Morris said, she knew she wanted to ask the school district to fix its rules, but she didn’t know where to start.

She first reached out to Western Native Voice, a social justice organization based in Montana. Montana is one of the few states with a law that protects Native Americans’ right to wear traditional regalia during public events, including high school graduations.

Morris had questions about what led to the law, and what she could do to impact policy in Anchorage schools. The organization told her she would need a group of voices behind her, Morris said.

That sparked months of advocacy. Morris and her teenage daughter testified in front of the Anchorage School Board and joined the school district’s Native Advisory Committee. With other committee members, they stuffed hundreds of envelopes to politicians, Alaska Native corporations and villages, Morris said.

“There were times when I didn’t think it would happen because it just felt like we’d get nos all the time," Morris said.

Morris also helped call other school districts to learn about their policies.

Of Alaska’s next three biggest school districts, just the Fairbanks North Star Borough School District has a districtwide regulation that says graduates can wear “cultural designators,” including feathers, beaded headbands and tartan items. The school districts based in the Matanuska-Susitna Borough and on the Kenai Peninsula don’t have written, districtwide policies about traditional regalia, according to school officials. The Juneau School District also doesn’t have a districtwide policy, but students often wear culturally significant items such as patterned stoles and leis, said Kristin Bartlett, chief of staff for the district.

Anchorage’s new regulation, announced to parents this month in messages from the district, is leading some students to prepare now for their ceremonies in May.

Charitie Ropati, a 17-year-old senior at Service High and a member of the Native Advisory Committee, said she plans to wear have her graduation cap and gown adorned with beading. Ropati also helped push for the new regulation.

“We’ve always had to conform to Western standards and it’s important when we do walk across that stage, we can wear our Native regalia,” said Ropati, who is Yup’ik, Samoan and Mexican.

Ropati said she’s glad the regulation is inclusive of all groups. She has talked with enthusiastic friends who are Chinese and Latino about ways they’re going to incorporate their culture into their graduation attire.

“When I graduate I want younger Native students to see me in something that’s familiar to them and their family and their culture,” Andrew said. “I want them to feel inspired.”

Last school year in the Anchorage School District, the four-year graduation rate for Alaska Native and American Indian students was about 64 percent — up from 47 percent in 2014, but still the lowest among racial and ethnic subgroups in the district, according to data from the Alaska Department of Education and Early Development. Among all of the Anchorage students in the Class of 2018, 81 percent graduated in four years.

Morris said she’s really happy about the new regulation, but she’s not done advocating yet.

She’d like Alaska to have a statewide law similar to Montana that says students can wear regalia at their graduations. At the district level, she wants the regulation changed so her daughter can wear her Yup’ik headdress when she graduates in 2021. That’s not allowed now.

The regulation has also received some pushback for requiring students to fill out notification forms.

Andrew said it’s demeaning to have to ask for permission to wear traditional regalia. Johnson-Struempler said it’s a way to make sure students aren’t violating the restrictions.

Johnson-Struempler said the district debated whether students could wear headdresses, “but we wanted to start in small baby steps.”

“They’re not giving us everything, but it’s a start,” Morris said. “I am still grateful for our win.”

Even nearly a year later, as Morris talked about watching her son cross the stage in his sealskin cap to get his high school diploma, she got goosebumps. She was just so proud, she said, and she knows her ancestors were too. She can now share that feeling with more families of more graduates.

“They’re honoring their past while stepping into the future," she said, “and they’re bringing their culture with them.”