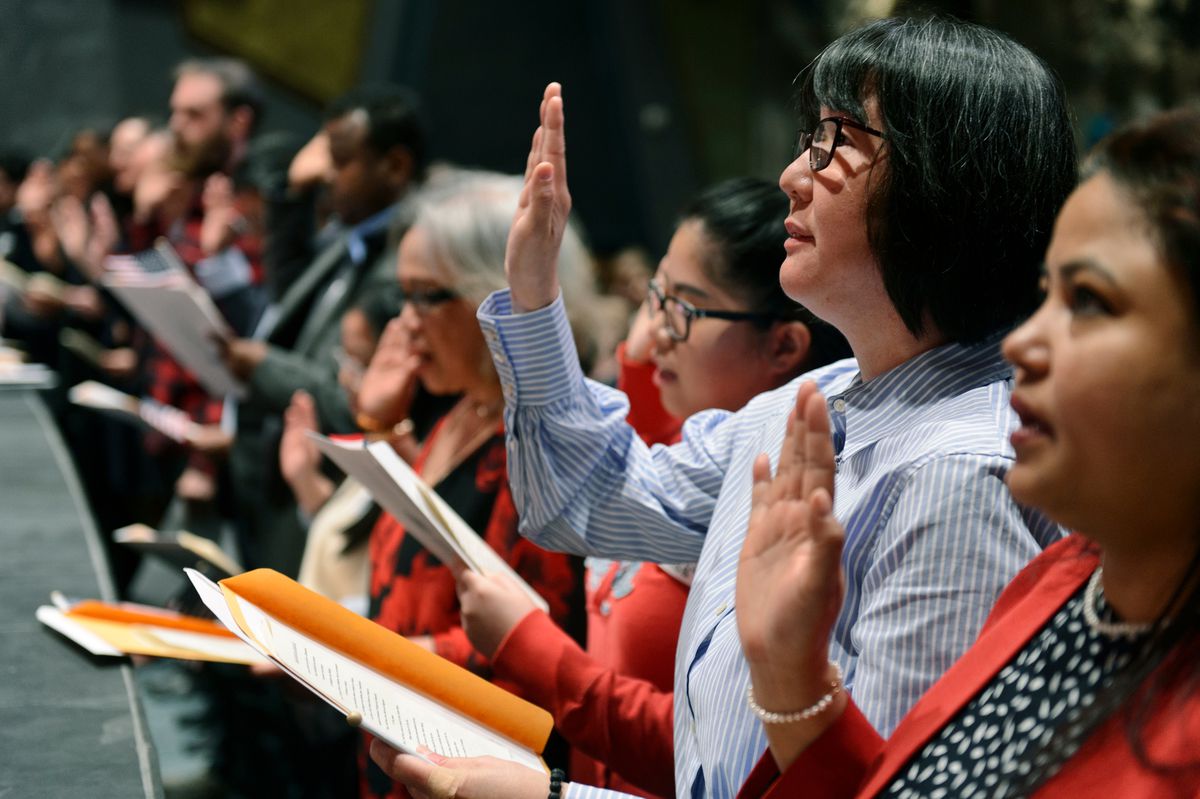 East High School teacher Yoko Grove turned to her students to help her prepare for a test this year. She quizzed them with flash cards on questions that were likely to be on the written portion of her U.S. citizenship exam.

On Tuesday, many of those students cheered from the audience in East’s auditorium after Grove was granted her naturalization certificate.

Grove, from Saitama Prefecture near Tokyo, called it a dream come true.

“It’s just a once-in-a-lifetime experience,” said Grove, who teaches Japanese language. “Everybody supported me, and everybody’s been very kind to me, helping me.”

Nineteen new Americans were honored at Tuesday’s ceremony. Chief U.S. District Judge Timothy Burgess, who presided, said the achievement comes at the end of a difficult journey for many. East Principal Sam Spinella said the ceremony was special for the school because it included Grove.

“I’m very proud of her and the way that she teaches,” Spinella said. “She teaches her classes with great energy."

Grove first came to the U.S. for graduate school in 1993. Back then in California, she had few belongings, no driver’s license, and struggled to figure out how to run simple errands, she said.

Grove visited an Anchorage School District table at a job fair while living in Oregon with her husband, Ross Grove, who now teaches Spanish at Bartlett High School. Eventually, a job offer came, just weeks before the start of the 2004 school year, she said.

“I just packed a box of my teaching materials, a bag of rice, and a bottle of soy sauce, and a rice cooker and drove from Oregon to here,” she said.

Now, her students, who bow at the start and end of class, laugh often as they play games to boost vocabulary and writing skills. Grove’s colorful classroom on the second floor of East is decorated with references to unique Japanese food and animation. Language can provide them with insight into Japanese culture, she said.

Grove said she appreciates teaching students from diverse backgrounds. Japanese is a third language for most of her students, she said.

“If you’re living in a multicultural society like this, like East High School, it gives you a different perspective — more accepting of different opinions and different circumstances,” Grove said.

But Grove considered for a long time whether she wanted to takes steps toward U.S. citizenship, she said, concerned that doing so might feel like she was sacrificing part of her own heritage.

Now she said she’s comfortable identifying with both nations.

“It’s not about Japanese or American. It’s about me, who I am, and I am very comfortable being here,” Grove said. “And I really love America because it gave me, it keeps giving me, a lot of great opportunities.”

Grove said she hopes Tuesday’s naturalization ceremony will provide her students with insight into the citizenship process.

“A lot of students at East, they live here but they themselves are not citizens yet,” Grove said.

“It’s an encouragement to them,” Spinella said. “We have such a diverse population, and we have many of our students (who have) just come to this country just in the last few years.”

In addition to Japan, new citizens at Tuesday’s ceremony came from Vietnam, Tonga, Philippines, South Korea, Dominican Republic, Ukraine, Thailand, Switzerland, Canada, Somalia, Laos, Nepal and Guatemala. Each had a chance to introduce themselves to the audience, and each received loud cheers from the students.

At the conclusion of the ceremony, Burgess challenged the new citizens.

“Make your voice heard,” Burgess said. “Our nation was founded and built and made better by immigrants. Your ideas, your passion, your talent will make us stronger and better as a nation.”

Now that she achieved U.S. citizen status, Grove said she has another goal in mind.