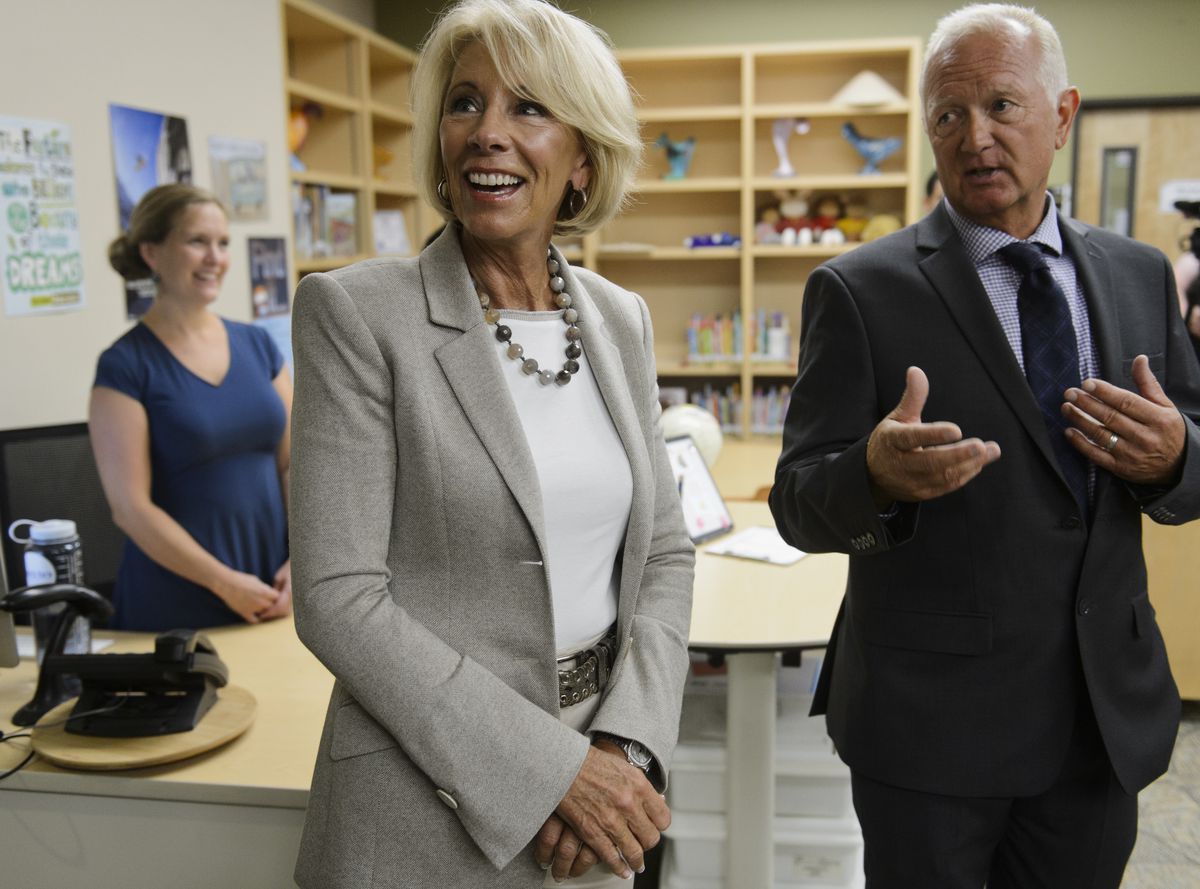 WASILLA — U.S. Secretary of Education Betsy DeVos is touring several alternative education programs in Alaska this week. This is her first trip to Alaska as the nation’s education secretary.

DeVos, a proponent of school choice, said her mission includes learning about Alaska schools and continuing to “encourage rethinking education.” On Monday, DeVos was in Wasilla at two public alternative schools within the Matanuska-Susitna Borough School District.

“I’m really grateful to have the opportunity this morning to see and visit a couple of schools that are rethinking education and that are focused on meeting the needs of individual students," she said after the tours. “I really appreciate Alaska’s bent toward freedom and individualism."

“So I’m thrilled to be here to fulfill that conversation,” she said Monday afternoon at Mat-Su Central School, a two-story building tucked off the Parks Highway.

“My goal is to visit as many different types of approaches to meeting the needs of students educationally as possible and to try to highlight those,” she said.

At Mat-Su Central, DeVos met with Gov. Mike Dunleavy, a former educator and former president of the Mat-Su Borough School Board. Many others greeted her, including Alaska Education Commissioner Michael Johnson and Mat-Su Schools Superintendent Monica Goyette.

Mat-Su Central enrolls more than 1,500 students. It touts its individualized approach, crafting a personalized education plan for each student, some who are homeschooled and some who are also enrolled in other district schools or private schools.

“We definitely try to do things differently here,” said school principal John Brown. “We do that intentionally. We do that purposefully. And we’ve been successful at that.”

[Mat-Su’s public-education approach: ‘Basically you can go to any school you choose’]

For about an hour, DeVos walked through the school building, stopping in classrooms, the library and at the student-run coffee stand. (DeVos got a skinny mocha. Dunleavy got a tea.) She spoke with students and with staff.

Konnor Kolberg, a junior at Mat-Su Central, told DeVos that the school allows him to choose how he wants to learn. He takes his core classes online, at his own pace, and his electives, such as graphic design, in a classroom.

“I just love how we have options here,” he said.

DeVos said Mat-Su Central is a good example “of beginning to think differently and creatively about what meeting the needs of individual students can look like.”

"It really does involve delivering curriculum opportunities remotely and course choice,” she said.

Asked about trepidation some rural communities might have about alternative schools, Dunleavy said some of those concerns are “probably steeped in history when kids were forced to go to a boarding school or forced to do something that they or their parents didn’t want to have happen.

“That’s an era we’re not dealing with now,” he said. “What we’re really talking about is opportunities and choice.”

Neither DeVos nor Dunleavy announced any policy decisions during Monday’s tour. Dunleavy said he looked forward “to more dialogue in our quest to better educate our kids.”

Murkowski voted against DeVos for education secretary in 2017, while Sullivan voted in favor of her confirmation.

Murkowski had said DeVos was unqualified for the position. After DeVos was confirmed, with Vice President Mike Pence casting the tie-breaking vote, Murkowski urged cooperation. She said she would hold DeVos to promises she made, including to defend public education in Alaska and to not take steps to force school vouchers on the state.

In a statement Monday, Murkowski said she wanted DeVos to see the diversity of options in Alaska’s public school system and understand the diversity of students’ backgrounds, whether “they are from a small village and coming into Anchorage, whether the language they speak at home is a Native language, or whether it is one of the hundred plus languages from other countries that are spoken just within the Anchorage School District alone."

”We want her to understand the challenges that we face in delivering an education in a state where you can’t always get a physics teacher out to every high school and how Alaskans rise to meet those challenges through things like tele-education,” Murkowski said.

This week, DeVos is also expected to travel Alaska with Sullivan.

They’ll go to the Alaska Native Science and Engineering Program at the University of Alaska Anchorage, Kivalina’s McQueen School and the Star of the Northwest Magnet School in Kotzebue, according to Sullivan’s spokesman Mike Anderson.

DeVos will “see educational success stories and also our unique challenges,” Anderson said. “Most of all, she will see that a one-size-fits-all approach to education does not work.”