Regents vote to consider options beyond a controversial university consolidation 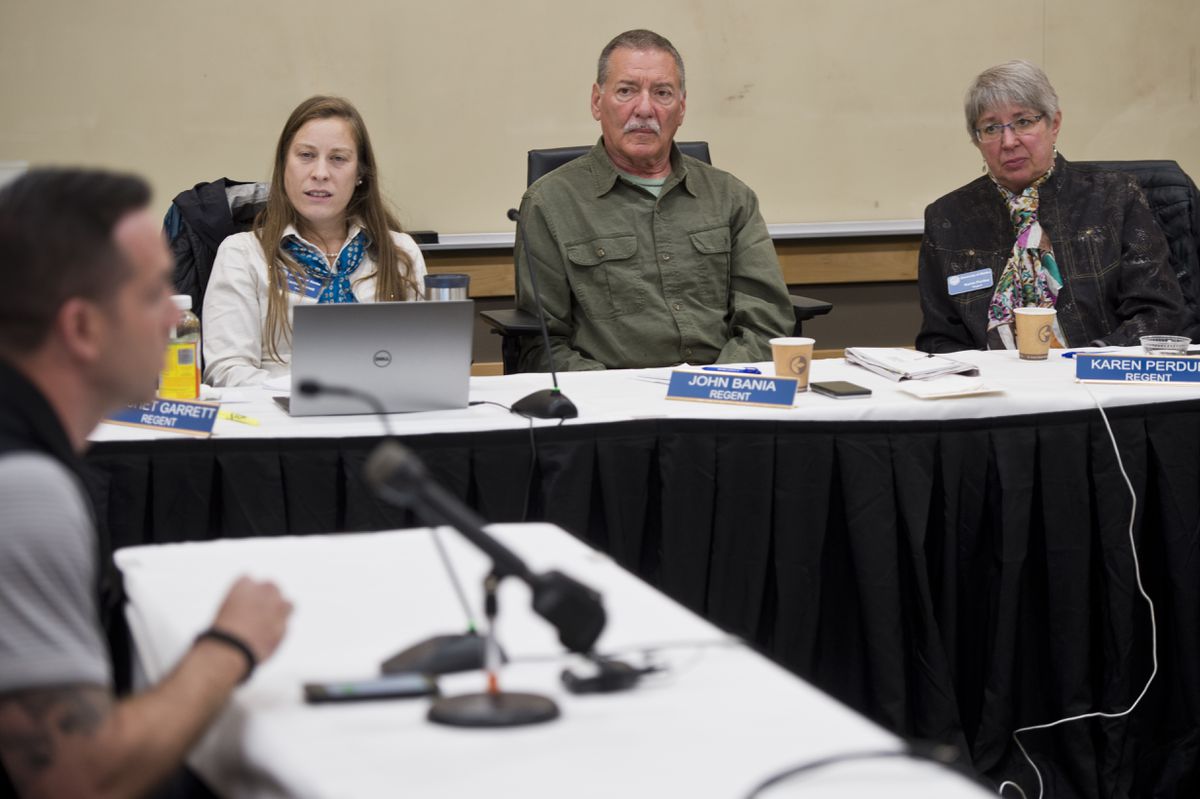 University of Alaska regents will consider other options for structuring the statewide university system under reduced funding, not just a controversial merger, according to a Friday vote.

“Students come first, and if students are imploring us not to drive to a one university model, or a single accreditation model, we should be responsive and attentive to that, but also be mindful of the time frame we’re in,” UA Regent Andy Teuber said during Friday’s meeting in Anchorage.

Originally facing a one-year, $135 million state funding cut, regents on July 30 tasked UA President Jim Johnsen with four items, including to prepare a plan to transition to a single institutional accreditation over the current academic year. The board would then have to approve the plan.

On Friday, regents voted 11-0 to delete that directive and insert a new one: Prepare options for structuring UA, for board consideration, that include “single and multiple” institutional accreditations.

Regents said they wanted to make it clear that consolidation wasn’t a done deal. Johnsen said he was “comfortable” with the change.

“Let us catch our breath for a moment and ensure we’re not going to drive in a direction that’s going to continue this trauma,” Teuber said.

Gov. Mike Dunleavy has stepped back from the unprecedented $135 million budget cut and agreed to a $25 million cut for UA this year. Dunleavy and UA Regents Chairman John Davies also signed a compact agreeing to two more years of cuts for the university system: a $25 million reduction next year and $20 million the year after that.

Regents voted Thursday to move ahead with fast-tracked, system-wide reviews of programs and units, from athletics to engineering, to inform their decision about UA’s future structure.

While regents heard public testimony from dozens of people this week against consolidating to one UA, they’re faced with political pressure too.

UA leaders and state lawmakers have tossed around the idea of one accredited university for years.

In this year’s state operating budget, the Legislature instructed regents to consider a plan to transition to single accreditation, and to update legislators on the development of such a plan by Dec. 1.

In the compact with the governor, priorities for UA include “structural consolidation and consideration of single accreditation."

Davies said Friday that regents can’t lose sight of the lawmakers’ direction. He also agreed with making it clear that regents haven’t decided on single accreditation, and are considering options, he said.

The UA system currently includes UAA, UAF and UAS, each with their own institutional accreditations, plus 13 community campuses and the Fairbanks-based statewide administration. Consolidation would basically mean scooping it all up and putting it under one accredited University of Alaska with multiple campuses.

Proponents of consolidation said it would lead to fewer administrators and more money flowing into academic programs during a time of repeated funding cuts. Johnsen has advocated for one UA.

But critics, including faculty, questioned the math and said consolidation would destroy the universities’ unique identities. They have demanded UA slow down.

Chancellors of UAA, UAF and UAS have supported a more cooperative “consortium” model that would keep the three universities separate.

A group of university employees tasked with considering restructuring options for arts, humanities, and natural and social sciences also wrote a recommendation. It says university chancellors should handle the first two years of budget cuts locally while restructuring is considered separately.

The recommendation has been endorsed by more than 300 people as well as the three faculty senates and other groups, said Joel Potter, UAA assistant professor and member of the group.

UA Regent John Bania said a new university structure could include one UA, a consortium model or a hybrid.

The next full board meeting is scheduled for Nov. 7.