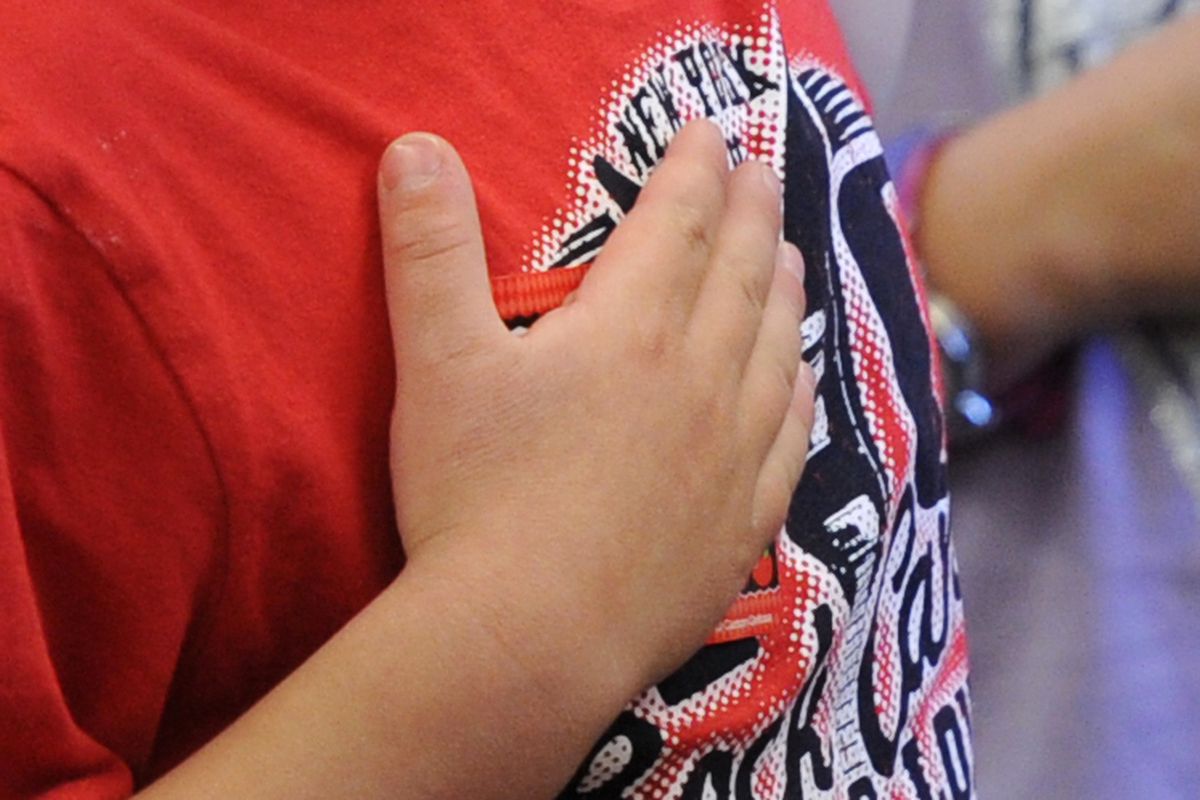 A kindergartener during the Pledge of Allegiance on the first day of school at Anchorage's Gladys Wood Elementary School, August 29, 2012. (Erik Hill / ADN archive)

A kindergartener during the Pledge of Allegiance on the first day of school at Anchorage's Gladys Wood Elementary School, August 29, 2012. (Erik Hill / ADN archive)

The Anchorage School Board is scheduled to decide Tuesday whether it will require schools to play the national anthem and the state song, “Alaska’s Flag,” during the first week of the school year and then at least once a month after that.

The controversial proposal comes from board member Dave Donley. He said the regular playing of the national anthem and state song will instill more patriotism in students.

“As we honor diversity and recognize diversity, we also need to preserve those key elements of our culture that bring us together as Americans,” Donley said in a recent interview.

Some board members have said the proposed policy isn’t needed — schools already play the national anthem, students say the Pledge of Allegiance and civics is taught.

“I just don’t think another regulation is necessary,” board member Alisha Hilde said at a school board meeting in early September. “I think we really want to focus on academics right now.”

Under Donley’s proposal, schools would decide how to play the two songs each month, whether over speaker systems, during school assemblies or at other events. The proposal wouldn’t require students to sing or participate in the observances, but it would require those not participating to “maintain a respectful silence and not disrupt the ceremony.”

Donley said the proposal would set a minimum standard for Anchorage schools.

Currently, Anchorage School District regulations say the pledge “shall be recited regularly at the start of the school day.” There isn’t a specific policy regarding the national anthem and the state song, and no one is tallying how often each school plays the songs, according to Alan Brown, district spokesman.

Several principals said the national anthem is often played at football games, pep rallies and other events, while the state song is played less often.

Both songs are woven into curriculum for elementary school music classes, said Bruce Wood, director of the district’s Fine Arts Department. Students are introduced to the songs around first grade and taught to sing them around third grade, he said.

The students sing other patriotic songs earlier, such as “My Country Tis of Thee," because the vocal range is smaller, he said. Music teachers want to build students’ confidence, and “The Star-Spangled Banner” and Alaska’s state song are tough to sing, he said.

“It’s an octave and a half range,” he said of the national anthem. “Little ones just don’t have that in their voice yet.”

More than a year ago, Donley said, he first received calls from Anchorage parents concerned that their children weren’t saying the pledge at school, and that piqued his interest to investigate further, eventually drafting the proposed policy change.

According to Brown, the district found fewer than five schools that weren’t saying the pledge daily. Now those schools are, he said. A survey of music teachers found about six of around 60 teachers said they hadn’t started teaching the national anthem in third grade, Wood said.

“It wasn’t for any social or political reasons,” he said. “It’s just a hard piece.”

Wood said he reminded them of the curriculum, and there wasn’t any pushback.

“No matter what happens, I think we made progress,” he said.

This is Donley’s latest iteration of his proposal to insert more patriotic songs into schools.

He previously suggested requiring that schools play the national anthem and state song each week, triggering emotional and, at times, tense public comments at a March school board meeting. The board ultimately decided it needed more time to study the issue.

The district has surveyed principals about whether they’d support requiring the playing of the national anthem and state song.

By Monday, the Anchorage teachers’ union hadn’t taken a vote on the proposal and didn’t have an official stance, said Anchorage Education Association president Tom Klaameyer.

Bartlett High School Principal Sean Prince said he wasn’t sure about the goals of the proposal. If the board wants to increase patriotic displays, he said, why not focus on dedicating instructional time to talk about the meaning of the songs, instead of making it one more thing for students to passively listen to.

“It’s the difference between retweeting something and actually having a conversation about it,” said Prince, who served in the U.S. Marine Corps.

At Bartlett, Prince said, students say the pledge each morning, and the national anthem is played or sung at football games, student assemblies and other events.

He said he had concerns that the monthly playing of the national anthem and state song would eat into instructional time. It might not seem like a lot, he said, but “every nickel and dime do add up.”

At Birchwood ABC Elementary School in Chugiak, students also start their day with the pledge and then sing a patriotic song, said principal Michael Thomas. They rotate the song monthly, he said.

Wendler Middle School principal Marcus Wilson said the pledge was a staple of students’ morning routine, and he had no opinion on Donley’s proposal.

School board members discussed Donley’s proposal at a board meeting earlier this month. Some said the current policy is sufficient.

“I feel like we do a very, very good job of teaching civics and encouraging a sense of pride in our country and our history,” said Board member Deena Mitchell.

According to board policy, the school board can decide to require patriotic exercises. Donley said his proposal fits that charge.

“I think this is the right thing to do for our kids,” he said.

The seven-member school board is scheduled to vote on Donley’s proposal at its 6 p.m. meeting Tuesday at district headquarters.