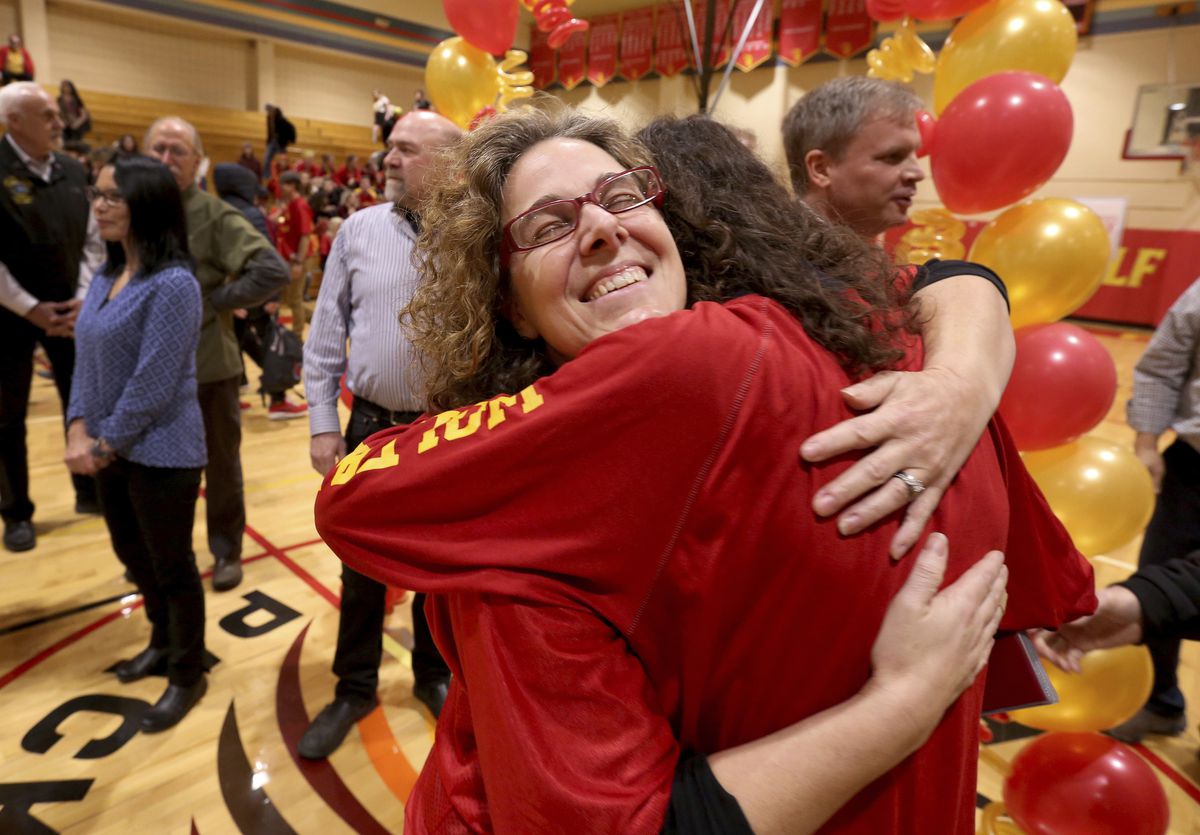 In this Friday, Oct. 25, 2019 photo, West Valley High School teacher Amy Gallaway is congratulated by a student after being named the 2020 Alaska Teacher of the Year during an assembly in the school gymnasium in Fairbanks. (Eric Engman/Fairbanks Daily News-Miner via AP)

In this Friday, Oct. 25, 2019 photo, West Valley High School teacher Amy Gallaway is congratulated by a student after being named the 2020 Alaska Teacher of the Year during an assembly in the school gymnasium in Fairbanks. (Eric Engman/Fairbanks Daily News-Miner via AP)

FAIRBANKS — A Fairbanks teacher has been named 2020 Alaska Teacher of the Year, an honor revealed in a surprise ceremony at West Valley High School.

Amy Gallaway walked into the West Valley gym on Oct. 25, where the school was told they'd be filming an assembly for another activity. Students and teachers competed for a moment in a hopscotch activity before Principal Sarah Gillam called in a "VIP team" consisting of legislators, school district staff and members of the Department of Education and Early Development, including Education Commissioner Michael Johnson.

Johnson announced there was one more person on his team: Amy Gallaway, the 2020 Alaska Teacher of the year. The crowd of students erupted into applause as Johnson noted Gallaway was selected for many reasons, one of them because "she doesn't just teach democracy, she has you do democracy."

Gallaway is a Kid's Voting liaison. She teaches the We the People government class and has encouraged student to participate in the national "We the People: The Citizen and the Constitution Program."

When she heard the announcement, Gallaway was sitting in the bleachers with the seniors. She said the news took her breath away and she started to cry from gratitude.

Johnson handed the mic over to Gallaway who took a minute to address her students. Surrounded by Department of Education staff, legislators and her fellow West Valley staff members, she recognized her students and her school.

"I want to say that I am incredibly grateful to be a Wolfpack and to work with, I don't know if you guys know this, but we have our Interior delegation — all the people in power are here for you," she said. "This would not happen in any other state, so I want you to remember that you are our most prized resource and I am blessed and privileged to be able to be at this school to help you become citizens because, We the People students? Where does liberty live?"

"In the heart," students called back to her from the crowd.

Walking out of the gym and to a reception in the library, Gallaway said she felt, "Overwhelmed and awed because to have so many important people here including all of the students it just, it humbles me."

It's the first time a Fairbanks teacher has been selected as Alaska Teacher of the Year since 2013.

"It's amazing . . . and we've all known and loved Amy for so long it's just wonderful that she wins this award. She's so highly thought of by staff and by parents and students so it's really perfect," Superintendent Karen Gaborik said.

Gaborik noted Gallaway has a huge impact and is often voted staff speaker at graduation. Kids talk about Gallaway's classes for years afterward, she said.

Principal Gillam said it's exciting to have a West Valley teacher selected.

"I agree with Amy that I think we have the best staff and the best students," she said, "and we work really hard to try to make sure that the learning that happens here at school is carried off into the community — and I think the work that Ms. Gallaway has done is a great example of how we try to make sure that we have citizens walking across the graduation stage and more than just that high school diploma, but really willing to be a part of our community."

Ben Griese, a special education teacher at Chief Ivan Blunka School, will act as an alternate.