‘The year the ukuleles took over’: Anchorage students’ interest in the tiny stringed instrument soars 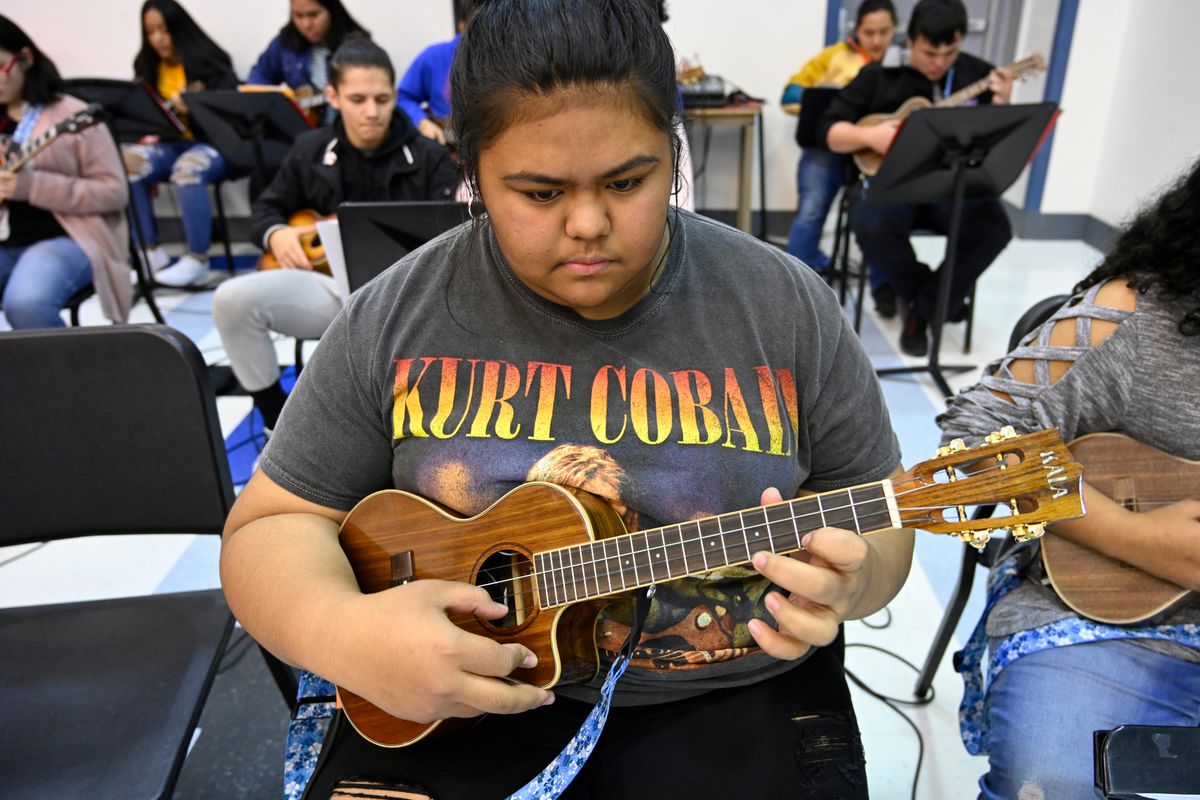 A group of students filed into a music room at Anchorage’s East High School last week and plugged their instruments into a large audio mixer. A cacophony of sounds followed as they strummed chords and plucked strings, the chaotic noise amplified over a speaker system. Then it went quiet for a moment. Teacher Kiel Schweizer counted the group in.

Suddenly, the gentle plink-plink-plink of nearly 20 ukuleles playing “I Gotta Feeling” by the Black Eyed Peas filled the room.

This is East High’s ukulele orchestra. Its teenage musicians are part of a growing wave of Anchorage School District students signing up to play the short-necked, four-stringed instruments.

“This has been the year the ukuleles took over,” said Schweizer, East High’s guitar and ukulele teacher.

For the first time, the number of students enrolled in a ukulele class at East High has eclipsed the number in a guitar class. Across the district, interest in the ukulele is increasing, said Bruce Wood, Anchorage School District fine arts director.

Schweizer ticked off possible reasons why: Ukuleles are affordable, portable and easy to play. Their popularity on YouTube has helped. Plus, the ukulele is embedded in some students’ culture, he said

“I’ve played since I was a kid,” said Precilla Fagafaga, a 16-year-old junior who plays the tenor ukulele at East. Fagafaga said she’s Samoan, and her whole family knows how to play the ukulele. It’s usually more strumming chords than picking pop songs at her house, she said.

“At home, they play island music,” she said.

Loa Vahaakolo, a 17-year-old senior, plays a bass ukulele. It looks like a shrunken bass guitar. He also comes from a family of ukulele players. His family is Tongan, he said. The instrument is a staple when they’re together after church on weekends or during holidays.

“You have to jam out or it’s not Thanksgiving,” Vahaakolo said. “If there’s no reggae songs, it’s not jamming out.”

At East, he said, it’s not uncommon to find students playing ukuleles between classes.

“During lunch if you see a guy with a ukulele, they’ll be a bunch of Polynesian kids around him, you’ll hear somebody singing,” he said.

About 15% of East High’s roughly 1,750 students identify as Native Hawaiian or Pacific Islander, according to the district data. A University of Alaska Anchorage professor found East High was the most diverse school in the nation based on 2012-13 data.

In ukulele class, Schweizer said, he sees pop music as a strong, common link among his students.

“It’s the great equalizer,” he said. “Some of these kids come from households where they only speak Hmong, or only speak Hawaiian … but they all know Justin Bieber.”

One day, when he was a music teacher at Anchorage’s Nunaka Valley Elementary School in 2005, Schweizer found out-of-tune, dusty ukuleles in a closet, he said. He decided to tune the instruments and pass them out to students — an effort to replace the piercing sounds of the recorder with the ukulele’s more mellow tones.

“It was far better for me to sit in a classroom of kids playing ukuleles softly than to listen to them squeak and squawk on their recorders,” Schweizer said.

The students liked it too.

“They were learning music with ukuleles and they felt like rock stars,” he said.

After Schweizer moved to East High to take a job as the school’s guitar teacher, he launched a ukulele club. He called it the East Anchorage High School Ukulele Society for Better Living.

“We would sit around and arrange songs for the announcements,” he said.

Then they’d stand in the principal’s office in the morning, play their ukuleles and sing a song over the intercom system.

Schweizer later decided to turn ukulele club into a class. He spent several months writing curriculum and working with the district administrators. In fall 2014, the school district’s first ukulele class launched at East High. It had about 30 students, Schweizer said.

It has grown every year since, expanding to a beginner, an intermediate and an advanced class that students must audition into. This year, there are about 70 students (trumping the roughly 50 guitar students). They perform around Southcentral Alaska, and students from the advanced class travel to Hawaii every other year.

Schweizer arranges all of the songs himself, he said. An arrangement takes about 10 hours.

His most time-consuming piece so far is a medley of five Beyoncé songs: “If I Were a Boy,” “Irreplaceable," “Crazy In Love,” “All the Single Ladies” and “Halo.” That mash-up probably took at least 20 hours, he said.

But he loves the work, and the classes.

“It gives them something that they might just continue with at some level throughout the rest of their life," Schweizer said. “And they can make friends this way. They can bond with their family. There’s just a lot of good that I see. That’s really why I’m passionate about it. I feel like I’m giving the kids something that they’re going to remember.”

And it’s not just East High that has a ukulele program now.

Within the past five years, programs have launched at Bartlett High, Dimond High, West High and Hanshew Middle School, Wood said. Across the district, 169 high school students are enrolled in a ukulele class this year, up from 124 last year, he said.

The popularity of ukuleles has also exploded nationwide. Between 2009 and 2018, the number of ukuleles sold soared by 252%, according the National Association of Music Merchants Global Report.

At East High, Niah Alfaro, a 16-year-old junior, got a ukulele as a gift, inspiring her to join Schweizer’s class. She likes the instrument’s size.

“It’s travel-size and easy to carry,” she said.

Isaac Moua, a 17-year-old junior, said he was introduced to the ukulele in guitar class. He hopes to one day write his own songs. For now, his favorites to play are Toto’s “Africa” and Queen’s “Bohemian Rhapsody."

“I practice almost every day at home,” he said.

Schweizer hopes to see the ukulele program to continue to grow. The ukulele is a good way to learn music, and the group’s performances help build students’ confidence, he said.

Last week, East High’s fire alarm sounded in the middle of advanced ukulele class and the group had to cut short its rendition of “Sugar” by Maroon 5.

“We were too hot!” one student called out.