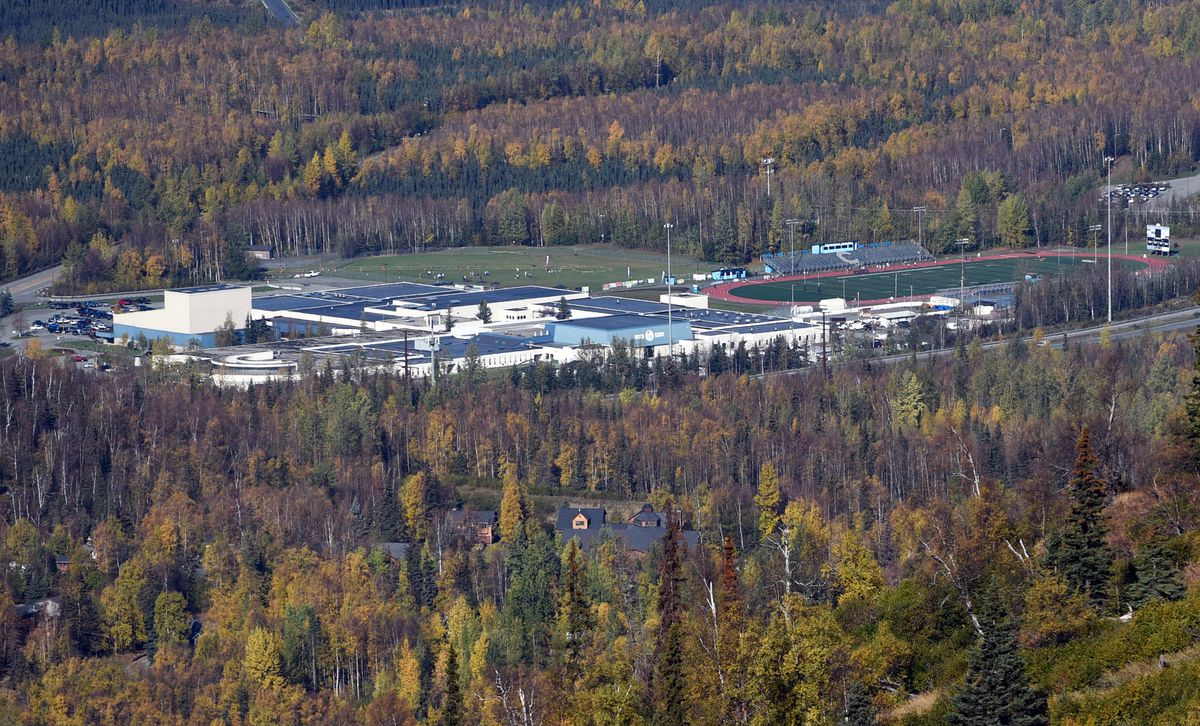 A feud has formed in Chugiak-Eagle River over whether to combine the area’s two public high schools.

At stake in the spat are tens of millions of Anchorage municipal dollars and the future of thousands of children in the twin towns where the only thing people might currently be more irritated with than outsiders is each other.

The rift began when a November earthquake forced the closure of Gruening Middle School and Eagle River Elementary, but it seemed to have closed when a committee of local parents, teachers, school board and community members recommended repairing the schools for a combined $36.3 million.

The committee’s fix avoided a plan proposed by some community members who proposed consolidating the two high schools at Chugiak High while converting Eagle River High into a middle school for sixth- through eighth-graders. Those who pushed the idea said it would save money by closing (rather than fixing) Gruening, would ease crowding in area elementary schools and would give high school students greater educational opportunities because a more diverse range of classes could be offered at the larger facility.

But committee member Debbie Ossiander said Chugiak-Eagle River residents worked hard two decades ago to get a second high school in the area and would be wise to remember the days of rampant overcrowding at Chugiak High.

“Chugiak-Eagle River wants and needs those schools,” she said during the committee’s final meeting in March.

Ossiander’s belief isn’t shared by all in her community. Within the past several weeks, a vocal faction has sprung up to revive the plan, saying combining high schools is a simple, fiscally sound fix that would benefit students from both schools.

“I just want the best for all of our kids,” said Ingrid Gavalya, a local parent who recently started an online petition to advocate for a combined high school.

Gavalya said she doesn’t think fixing Gruening makes much sense. The school has had design issues since it was built, she said, and the answer should’t be to simply fix a broken-down facility. Meanwhile, students at Chugiak and Eagle River High get fewer elective opportunities than their counterparts in other Anchorage School District schools. She sees combining schools as a logical solution to multiple problems.

“I was like, ‘We’ve got to make a better choice than this,’" she said.

However, that’s less than half gathered so far by Eagle River High student Ethan Jennings, whose “Do not unite Eagle River and Chugiak High School” petition had received more than 2,500 signatures as of Tuesday morning.

Jennings said he didn’t expect the petition to take off, but said it was gratifying to see his petition get so many signatures so quickly.

The junior said he believes students at both schools are opposed to the consolidation -- especially those who would be forced to move midway through their high school experience.

“That would be very disappointing.”

Among the arguments against combining schools are the lack of student and district support for the plan, longer commutes for students, fewer opportunities for students hoping to play sports or participate in activities such as student government, and the possibility of students being bused to other schools outside Chugiak-Eagle River.

Those for and against combining schools have taken to social media to argue their case, engaging in lengthy debates in comment sections on posts about the issue.

Ironically, the controversy has come up at the same time the Chugiak-Eagle River area has seen a fresh wave of secession sentiment, with the recently formed “Eaglexit” group advocating that Chugiak-Eagle River split from the Municipality of Anchorage and start its own government.

In 2003, Anchorage voters passed a $209 million school bond package that included funding for a new Eagle River High School. Passage of the bond (which was eligible for up to 60% state reimbursement through a policy that has since gone away) was hailed by locals as the culmination of a nearly decade-long fight to alleviate crowding at Chugiak High.

In 2005, Eagle River High opened on Yosemite Drive, about 5 miles south of Chugiak High and 6 miles north of Bartlett High in Anchorage. The new school solved an overcrowding situation that had seen more than 2,000 students roaming the Chugiak campus, where relocatable classrooms and split lunch periods had become the norm.

Current Anchorage Assembly member Crystal Kennedy of Eagle River ran successfully for school board in 2003 in part on a platform of building a second high school.

“We had unprecedented crowding” at Chugiak, Kennedy said Tuesday.

Kennedy said she hasn’t taken a position on combining high schools, but she and Assemblyman Fred Dyson have called a community meeting for 6:30 p.m. Dec. 9 at Mirror Lake Middle School to discuss the issue. She said the meeting will include 15-minute presentations from groups representing both sides of the issue. Kennedy said the idea is to give the community a chance to become better educated and weigh in on the situation in a public forum.

“People want a conversation and to have their questions answered,” she said.

Kersten Johnson-Struempler has worked in the Anchorage School District since 2000. She became an assistant principal at Eagle River High in 2005 and now works as the district’s senior director of secondary schools. During an interview at district headquarters in Anchorage, Johnson-Struempler said the situation at Chugiak was so bad students were often late to class because they couldn’t find a place to park.

“The student life experience was really affected,” she said.

The new high school relieved crowding at the same time Anchorage secondary school populations began to decline. In 2005, the two high schools had a combined student body of more than 2,200. Today, that has dropped by 20% to around 1,750 students, with Chugiak housing 897 Mustangs and Eagle River home to 847 Wolves.

The combined number is still above the 1,618 students Chugiak is designed to hold -- and also doesn’t take into account long-term projections that show the area’s secondary school populations growing.

“The Eagle River area is ripe for growth,” said school district consultant George Vakalis, who pointed to the new Powder Reserve neighborhood -- a planned 1,500-unit housing development -- under construction in Eagle River as proof of the area’s growth potential.

Vakalis said Chugiak-Eagle River residents in the late 1990s were adamant they wanted two high schools because of the crowding situation.

“Overwhelmingly it was, ‘We need another high school.'"

So why not combine?

The issue of consolidating schools arose after the district approved a bond package for the April election that included more than $40 million to fix Gruening Middle School. The price tag was higher than initially discussed because district officials decided to add additional upgrades that will extend the life of the damaged school, which was built in the early 1980s.

“It’s almost going to be like a new school inside,” Vakalis said.

Some community members believe it would be easier to simply scrap Gruening and combine schools, but one Eagle River resident who is dead-set against the idea is school district chief operating officer Tom Roth. The former U.S. Army Alaska chief of staff thinks the plan could have disastrous long-term consequences for the area.

“I think a better question to ask is why would we do it,” Roth said.

Roth hopes residents don’t think that by voting against the school bond they’d be forcing a high school consolidation. Instead, Roth said, more likely scenarios would be busing middle school students to Mirror Lake or Anchorage-area middle schools, or perhaps creating a grade 7-12 campus at Chugiak, where Gruening students are currently attending classes while their school is shuttered.

“I don’t know that people appreciate that,” Roth said.

Some have suggested that if the schools were combined, Eagle River High’s nearly 300 military-dependent students could be sent to Bartlett to keep Chugiak below capacity -- a suggestion Roth takes exception to.

“I think that’s a very callous comment,” he said.

Busing military kids out of Eagle River would still only bring Chugiak to its capacity, he said.

“There’s no room for expansion."

That’s in contrast to Eagle River High, which was built with room to add a wing to accommodate growth.

As for student opportunities, Roth pointed out that one high school would mean fewer chances for students to participate in sports, plays and student government. For example, there would be one high school basketball team rather than two, cutting the number of overall spots on the team in half.

Roth said the district is well aware students and parents at both schools feel shortchanged due to diminishing elective opportunities. But there are relatively easy fixes -- such as letting students at one school take elective classes at the other -- that can solve those issues.

“There’s ways for us to provide combined opportunities for kids,” Roth said.

For Roth, the solution is relatively simple: Rather than combining high schools, the best plan is to fix Gruening while working to provide additional educational opportunities at Chugiak and Eagle River High.

“Why would the school board eliminate what is a tremendously successful program that’s been part of the Eagle River community for the last 15 years?”

Johnson-Struempler said that rather than bringing people together, the debate over combining high schools has the potential to create a real rift in the community.

“I think it’s going to create a lot of bad blood,” she said.

Kennedy said she thinks a public meeting where people can hear all the facts and weigh in on the various proposals sounds like a good step toward easing the tension.

“I hope what comes out of this meeting is a greater understanding of our entire situation and the pros and cons of any solutions,” she said.

She doesn’t want the debate to turn into a lingering feud.

“I want to make sure our community stays a community.”

Gavalya said she’s aware of the potential for hard feelings and hopes residents can have a productive and civil dialogue on the issue. In the end, she said, everyone must still live together in what’s otherwise a fiercely independent enclave.

“We’re all still going to be at Jitters (coffee house) together,” she said.