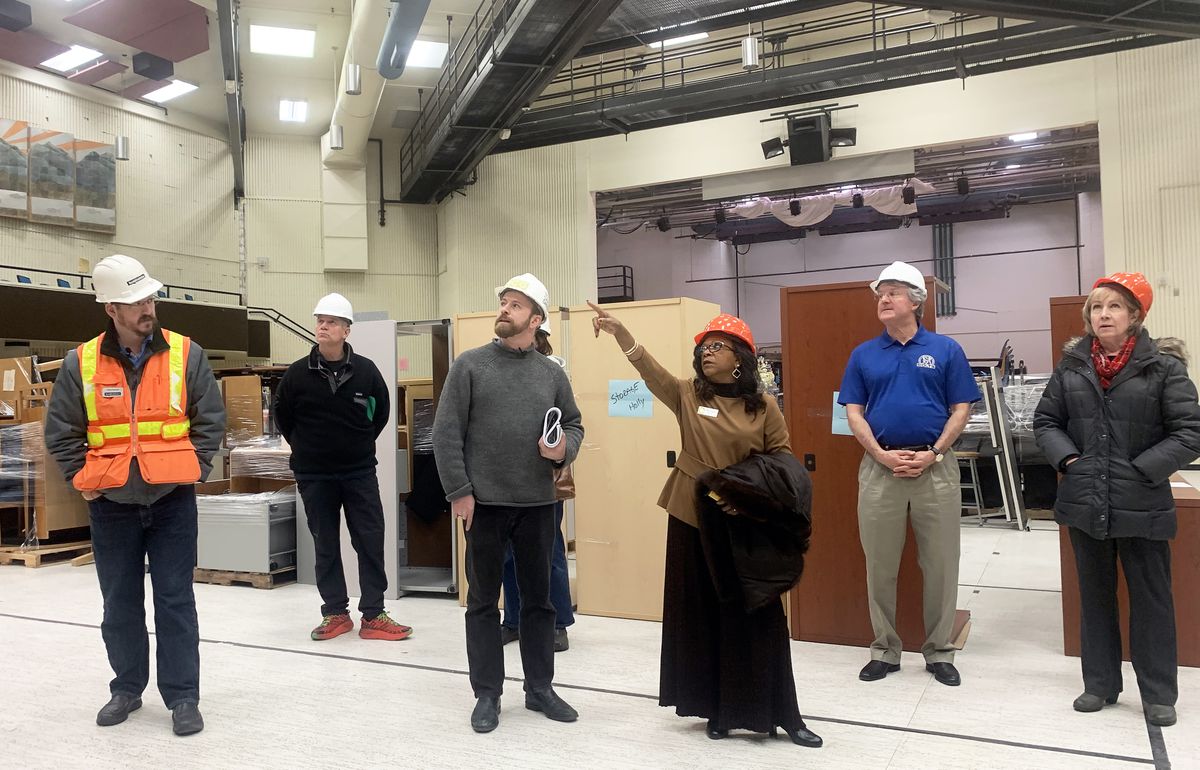 Rep. Sharon Jackson points to a section of roof in the multipurpose room at Gruening Middle School during a walk-through of the school held for community members on Thursday, Dec. 19, 2019 in Eagle River. (Matt Tunseth / ADN)

Rep. Sharon Jackson points to a section of roof in the multipurpose room at Gruening Middle School during a walk-through of the school held for community members on Thursday, Dec. 19, 2019 in Eagle River. (Matt Tunseth / ADN)

That was the message delivered last week by engineers and senior Anchorage School District officials who led community members on a tour of the earthquake-damaged school in Eagle River last week. Not only can the school be rebuilt better than it was before, they said, it also stood up to the magnitude 7.1 earthquake that caused millions in damage on Nov. 30, 2018.

Gruening’s nearly 600 students have been attending classes at the Chugiak High campus since the quake, and few people have been inside the 125,000-square-foot building over the past year. Anchorage School District chief operating officer Tom Roth said that’s why he felt it was important to show people what’s really going on inside the two-story school on Lee Street.

“The intent here is to inform and educate,” he said.

The school has been at the epicenter of a debate in Chugiak-Eagle River over whether rebuilding is the right option after it closed due to structural damage. Some in the community have argued Gruening should not be rebuilt, instead pushing a proposal that would convert Eagle River High into a middle school and consolidate the area’s two high school campuses at Chugiak High.

But district officials say that plan relies in part on faulty or misleading information — including the lingering ideas that Gruening is either fundamentally unsafe due to a poor design or that the school is built on shaky ground. Neither assumption is accurate, according to engineers and officials tasked with finding a way forward.

While Gruening did encounter design issues that delayed the school’s opening by a year in the early 1980s, ASD Capital Planning and Oversight senior director Tom Fenoseff said those delays were to ensure the building was safe for students to occupy.

“They corrected all of those deficiencies,” Fenoseff said during the walk-through, which was attended by a handful of interested community members, parents and local government officials that included state Rep. Sharon Jackson, Anchorage Assembly member Crystal Kennedy and Anchorage School Board member Andy Holleman.

Kennedy said memories are long, and people in the area still have lingering questions about the school’s design.

“That sticks in people’s minds,” she said.

Thursday’s tour began in the multipurpose room, where Stierwalt and Garrett Burtner, director of technology and innovation with architectural firm MCG, pointed to places where pieces of concrete fell from the walls due to steel columns moving separately from the school’s wooden truss system. Planned improvements will ensure that doesn’t happen in future seismic events.

“When we fix this, we’re going to tie that all together much better," said Stierwalt, who said reinforcement will also be added to keep the concrete veneer from falling.

Other major structural damage to the school includes a section of roof that separated from the wall; a stairwell that shifted and slumped several degrees; and cracked concrete masonry where steel beams were embedded in concrete. There was also damage to drywall, pipes, duct work, sprinkler systems and electrical work.

The district commissioned a structural evaluation as well as a geotechnical report of the 20-acre property. The geotechnical report by Shannon & Wilson Inc. found the native soils in the area to be “dense to very dense and not susceptible to failure or strength loss during a seismic event.” The report did show loose soils potentially near the foundation stem walls, but engineers concluded there were no obvious issues that would account for the quake damage.

All the engineering reports are available on the ASD website, which also includes a detailed breakdown of earthquake damage at all district schools. Officials estimate the total cost of quake repairs could top $150 million districtwide.

Repairs include three tiers of work: 1) November 2018 earthquake repairs; 2) work needed to mitigate risk by increasing the seismic performance of the building; and 3) improvements to the facility that will extend its useful life.

Roth, with ASD, said those distinctions are important because of what they say about the work the district would like to complete and how it may end up being funded. Repairs for earthquake damage are eligible to be reimbursed by the federal and state governments. The mitigation work and improvements are not, though the district included them in an upcoming $82.8 million bond package because it makes more sense to do all the work at once while students are out of the building.

At Gruening, earthquake damage amounted to about $10.7 million. The remainder of the estimated $39.3 million rebuilding project covers mitigation and improvements, including everything from big-ticket items like a roof replacement and reinforcement to the concrete masonry units, to improvements to electrical systems.

Tour members walked down a long hallway where the outside of the gym wall remains shored up by a series of metal braces. Visiting deserted classrooms full of cracked drywall and white boards featuring year-old lesson plans, the group stopped in the recently remodeled life skills room, which fared better than other parts of the building after the earthquake.

There, Stierwalt explained that even small upgrades such as cupboard latches can actually be critical for improving the building’s potential usability after a large earthquake. Gruening — which opened in 1984 — was built to a “damage control” standard, meaning that everyone inside the building should be able to get out of the facility unharmed, Stierwalt said.

The highest standard — known as “immediate occupancy” — is what hospitals are built to, which means not only can they withstand a large quake, but they should usable in its aftermath. Once all the repairs and improvements are made to Gruening, Stierwalt said, the school will be both safe to occupy and more likely to be reopened quickly following a quake.

“It will be above damage control when all those three things are accomplished,” he said.

The final stop on the tour was the school’s gym. One rumor Stierwalt said he’s heard about the school is that its gym floor sank into the ground during the quake. That’s not the case. In fact, he said, the floor remains within new construction tolerances and characterized its slope as “really, really flat.”

Tour group members also got a chance to look at the damaged stairwell, which rather than being a collapsed mess of concrete is actually quite functional; Kennedy even walked up and down the slightly canted stairs herself as Stierwalt held a flashlight.

As the tour wound down, community members quizzed Roth further about the school repairs, asking in particular about the seeming high cost of the bond package. He responded by explaining the bond is a two-year package and said the district will actually retire $112 million in debt over the next two years.

Longtime resident Linda Landers said some people in the community are uneasy with the idea of shelling out more money and many are tired of seeing their taxes increase.

“They have a mentality they should have a rebate,” she said.

While it’s true the district could simply pay to repair the school to its pre-quake condition, Fenoseff said it’s far wiser from a fiscal standpoint to make repairs and improvements at once.

The cost to demolish Gruening is estimated at around $7 million. Tearing down and replacing the school would cost more than $75 million, the district has said.

Parent Tiffany Lund said another rumor she’s heard is that the district had to search for an engineering firm that would sign off on a plan to repair the building. Roth said that’s also untrue, and pointed out that the district has worked with Reid Middleton since 2013.

“They did not have to go looking for us,” he said.

Anchorage voters will decide on the bond package in April. Engineers said they aim to have a final repair plan in place in time for the bond’s passage in April. If the money is approved, they said, work would begin immediately and it’s likely students would return to Gruening by the end of 2021.

Roth said the district has worked hard to be open and honest with the public about Gruening’s condition. He pointed out that all the engineering reports are available online, and said a video of the walk-through tour would be posted online. He also said he’s confident the school — which his own daughter attended for two years — will be safer, more secure and even better looking once the project is complete.

“It’ll be much more appealing,” he said.

Roth said he hopes to hold more tours for people who want to get a firsthand look at the work being proposed for the school and the extent of the damage.