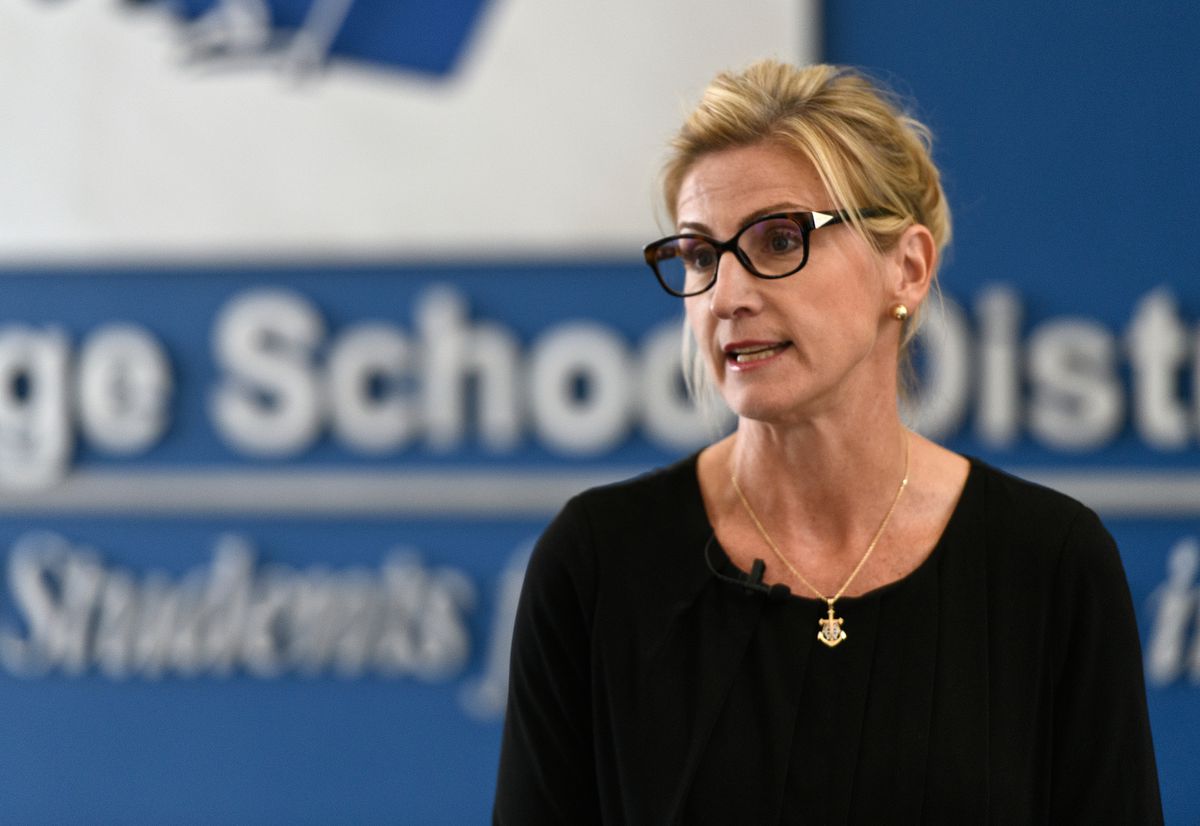 A proposed Anchorage School District budget that calls for cuts to health education, a popular program for gifted students and a reduction in security staff at several schools drew criticism at Tuesday night’s meeting of the Anchorage School Board.

“We would be robbing Peter to pay Paul,” said parent Jeff Mayfield, one of several people who testified against restructuring the district’s IGNITE program for gifted students by eliminating about 22 teaching positions and absorbing the program into regular classroom time.

The district says restructuring the program would save $2.3 million. It’s one of several cuts Superintendent Deena Bishop and the school district say are needed to close a shortfall of $19.5 million in next year’s $573 million proposed operating budget, which is roughly the same size as last year’s.

Mayfield’s son, Lucas, said the gifted program gives students like him a chance to explore complex concepts in an environment less chaotic than a regular classroom.

“Our school district would not be the same without IGNITE,” he said.

Officials say their hands are largely tied. District funding is constrained by the amount provided by the state’s “base student allocation” funding formula and what’s raised by local property taxes. It’s unknown how much school funding will be provided by the Legislature, but the formula has remained at $5,930 per student since the 2016-17 school year and there’s a cap on how much the district can collect in property taxes.

In a message accompanying the budget proposal, Bishop — whose tenure began in 2016 — said state budgets over that time have continually forced the district to tighten its belt.

“Unfortunately, all four years have included reduced or static revenue at the state level,” she said. “To provide a balanced budget as required by statute, these reductions have resulted in decreases to our expenditures.”

[Anchorage’s city election is coming up. What would you like us to ask the candidates running for Assembly and School Board?]

“Unfortunately I feel the numbers we’re using may be optimistic. There’s no assurance the funding we’re looking for from Juneau is going to be this good,” he said.

Other proposed cuts include the redesign of health education by cutting eight overall positions and moving health instruction into regular and physical education classes; security staff cuts at Chugiak and Dimond high schools and Polaris K-12; an increase in the students-per-teacher ratio of 0.25 at the middle and high school levels; and a one-hour early release/late start window once each week to allow more teacher prep time.

The district proposes cutting more than 50 regular teaching positions, most through a projected enrollment decline of about 200 students. The district also plans to use about $6 million from savings to close the gap, nearly $1 million more than it used in last year’s $572.5 million general fund.

The total proposed budget is $875.8 million, about $10 million less than this year. The figure doesn’t include $52 million in contributions to retirement benefits, which the district has no control over.

Several Polaris students and parents testified in opposition to the district’s proposal to cut the school’s lone security guard.

“I think they should not do this because we need the security guard to keep us safe,” Polaris student Maddison DuVall told the board.

South High parent Shawna Parrish said the loss of an assistant principal at her child’s school would add to an already chaotic job in which a handful of administrators are tasked with managing activities for hundreds of students.

“In this case, more hands means more students’ lives touched in a positive way,” she said.

ASD Chief Academic Officer Mark Stock said the proposed budget was the result of multiple meetings over months and included input from parents, students and staff. He said administrators thought “outside the box” in order to make reductions that would have the least impact on students districtwide while also keeping class sizes relatively stable.

“It’s certainly trying to make the best of a bad situation. There’s certainly no one here that’s excited or eager for the choices in front of you,” he said.

The district was originally facing a nearly $20 million shortfall for this fiscal year, but was able to address about $14 million of that through cuts that didn’t affect schools. But some cuts had to be made, Stock said, and the option presented in the proposed budget was the best the administration could come up with.

“We’ve gone through with a fine-tooth comb and collected every efficiency that we know to get to get to this point and we were still $6 million short of making a balanced budget, which is where this proposal came from,” he said.

Bishop said the shortfall could have been made up by increasing class sizes at the elementary school level by one student per classroom, but that wasn’t something she felt the community or School Board would support.

Board member Holleman said Tuesday’s testimony made clear that students and teachers feel passionately about their staff and programs. However, he said, without more state funding the district’s hands are largely tied.

“I don’t think anybody up here is happy about the steps we’re having to take,” Holleman said. “Unfortunately this isn’t a unique year, this is one more year where we’re trying to make the least negative impact as we adjust for the coming year.”

The board has until March 2 to present the budget to the Anchorage Assembly and is expected to vote on final passage at its Feb. 18 meeting.

Correction: An earlier version of this story misstated the name of Polaris student Maddison DuVall.