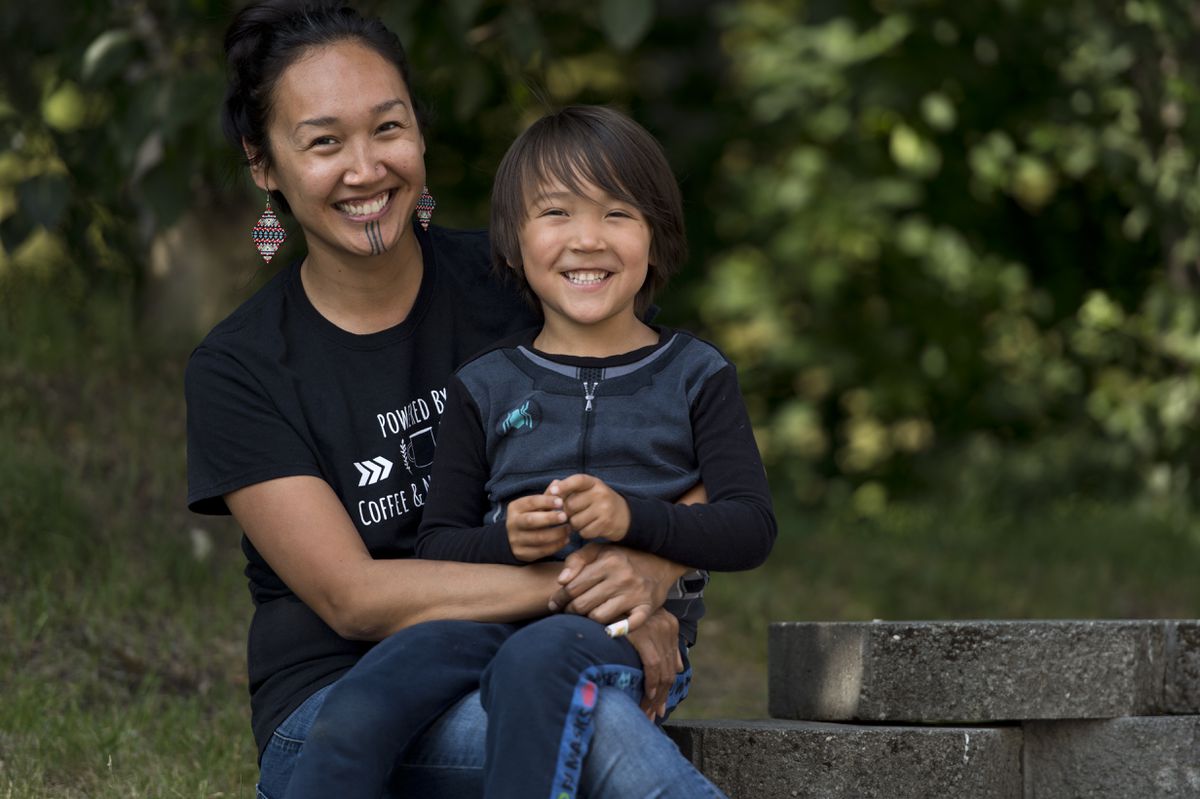 Charlene Apok is considering enrolling her son, Evan Lukluan, 5, in the in-school option so that the student can get to know his teachers, but said she has reservations. (Marc Lester / ADN)

Charlene Apok is considering enrolling her son, Evan Lukluan, 5, in the in-school option so that the student can get to know his teachers, but said she has reservations. (Marc Lester / ADN)

Charlene Apok expected that her 5-year-old son Evan would start kindergarten this August at the Anchorage School District’s Kincaid Elementary.

There, Evan would begin making new friends and connecting with teachers, she thought.

But as Apok, a single mother, watched cases of the coronavirus grow in Anchorage, her doubt also grew — is sending him into a classroom too risky?

Apok is no longer sure that she will enroll Evan in elementary school this year. She said she changes her mind daily.

As the school year approaches, many Anchorage parents are feeling forced to make difficult choices amid myriad unknowns.

The Anchorage School District announced last week that it will begin the school year with online-only classes as cases of COVID-19 in the municipality continue to surge and community spread of the virus affects more people. The district could move to a blend of in-person and online classes if the rate of cases decreases, although recent numbers indicate that isn’t likely to happen soon.

Superintendent Deena Bishop told KTUU on Thursday that because cases are still rising, parents should prepare for the likelihood that classes will be online-only through at least the first quarter. The district in a statement confirmed that possibility.

That leaves parents with a lot of questions. Will the district switch to in-person classes, and when? Will virtual school really be effective or is it better for children to do home schooling for the year instead? What will the combination of in-person and online classes be like?

Faced with a new and unfamiliar way of doing school, parents must also balance their own needs — such as work — with their children’s. Some, desperate for child care, want their children back in school buildings. Others worry about their kids’ social needs. And of course, there’s the question of what’s safe as the pandemic continues.

“It’s just a hard place to be in for anyone,” Apok said. “There’s just so much complexity and layers to people’s situations.”

Anchorage families now have three schooling options to choose from: enrolling in the district’s regular school, which begins with online-only classes but could change to some in-person class time; signing up for a new virtual school, which lets kids stay enrolled in their regular school for activities and sports but is essentially a home schooling program; or sign up for an already established home schooling program.

Bishop has said that the district’s plan is meant to give several options to families with different needs.

“There are families asking, ‘What am I going to do? I have to go back to work. I need you to educate my child.’ And there are families that say ‘I don’t feel safe having my child back in there until there’s a vaccine.’ Those are the opposite ends,” Bishop said in an interview last week. “We’re looking to really provide communication, be transparent, give as much information as we can so that families can make those decisions.”

Bishop said during a recent community briefing that the district is tracking COVID-19 case counts daily and will announce its plans every two weeks to give parents and families time to adjust and prepare.

When Sherry Smith, mother of 11-year-old Spring, learned that school would not begin in-person, she called every private school and home school in the area.

Smith, who also has three stepchildren, works as a hairdresser and has advocated for the district to open schools full time for in-person classes.

Smith said the virtual programs the district rolled out during the statewide shutdown this spring weren’t academically challenging, with complicated platforms that left her children floundering. At the time, Smith didn’t have internet in her home and had to scramble to get connected.

She has settled on IDEA Homeschool, a popular and long-running program in Alaska. She said she is now considering creating a home school co-op with a few other parents. The parents would rotate teaching duties and houses each day, giving others the ability to go to work, she said.

Smith hopes that a co-op will give Spring more time with kids her age and more stability than possibly switching back and forth between the school district’s virtual program and in-school classes as the coronavirus risk changes.

Still, she’s never been a home school teacher and is not sure how she’s going to make it work.

“I have this idea in my head how it will work out but I’m not really sure that’s actually how it works out,” she said of her plan. “Honestly, I believe that my children will probably get more out of my home school program than they will out of ASD’s strange program.”

Candy Bracken has two sons in the Anchorage School District and another who just graduated high school. She’s not yet sure what program to enroll her sons in.

None of the choices look ideal. One of her sons has dyslexia and is part of a four-year biomedical science program. She doesn’t know if those classes will be offered. Her eighth grader has been on an accelerated path in math, social studies and language arts, setting him up to take Advanced Placement classes in high school. He testified to the school board last week, saying he’s concerned that he would have to take regular classes this year instead.

Her sons also want to be back in school with friends, she said, and virtual school presents extra challenges for her son with dyslexia.

“We don’t know what’s going to be offered so we just don’t know which direction we need to go,” Bracken said.

Leslie Willenbrink is also worried about how the coming school year will impact her family and fears that her children’s education will suffer.

Her daughter, a junior, has depended on help from her classmates and after-school tutors to understand challenging lessons, and will struggle with online school without that support, she said.

Willenbrink has three teenagers — two at Dimond High School and one a student at UAA — who will all start the school year in virtual classes. Willenbrink herself is a student in UAA’s psychiatric nursing program, which will be all-online, too. Her husband, a contractor for the military, will also be working from home.

“It’s going to be chaotic,” she said. “My biggest concern is scheduling.”

Yet Willenbrink said she is lucky to have the internet capabilities, devices and the ability to support her children’s educations. Many other families don’t have those privileges, she said.

And though it will be difficult, she thinks school should be virtual for now.

“We should just get through it and try to confine everybody as much as possible so that they can get this under control. So it doesn’t have to drag out,” she said.

Apok, who is Iñupiaq and works for the nonprofit Native Movement, said she has watched the pandemic exacerbate the many inequities in the education system. Many single parents don’t have the resources she has, or the ability to work at home and care for their children.

Still, she said, striking a balance between work and caregiving has been challenging. When the pandemic hit Alaska, Apok was suddenly working from home and her son no longer had day care.

“My poor child is sitting here all day with a mother that’s been on calls for four hours back to back, you know, with nobody else to interact with, playing by himself,” she said.

She is turning to her roots as she tries to find a new path forward.

“As an Indigenous woman, first of all, we always had our children with us in our work,” Apok said.

In the spring, she spent time teaching her son outdoor skills and engaging him at home as much as possible. It’s tough, but there’s still plenty for him to learn, she said.

Because classes are starting online, Apok said she may now choose to enroll her son in elementary school so he can still begin to make new social connections.

“Adjusting to this, I think, is going to really necessitate a turnover in how our society views home and work and that balance and the integration,” Apok said. “Now is the time. Now is when we have to really imagine and be creative, to adjust to what we’re going to do and to adapt.”