Thousands of students are leaving Anchorage schools. It could mean a loss of millions in funding. 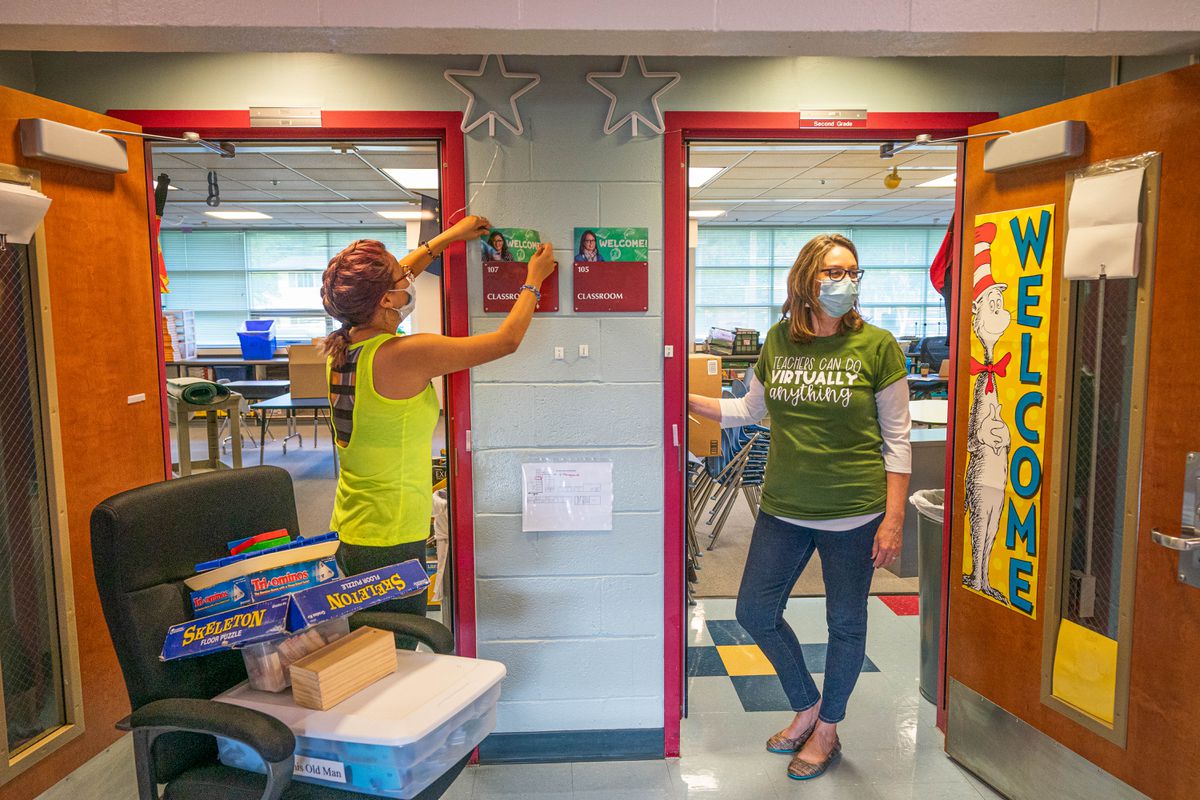 First-grade teacher Katrina Kim, left, takes her photo off of the door to her old classroom, preparing to move it to her new one on Thursday, Aug. 13, 2020 at Nunaka Valley Elementary School in Anchorage. At right is second-grade teacher Deborah Webb, wearing a shirt that says "Teachers can do virtually anything." (Loren Holmes / ADN)

First-grade teacher Katrina Kim, left, takes her photo off of the door to her old classroom, preparing to move it to her new one on Thursday, Aug. 13, 2020 at Nunaka Valley Elementary School in Anchorage. At right is second-grade teacher Deborah Webb, wearing a shirt that says "Teachers can do virtually anything." (Loren Holmes / ADN)

Thousands of students are leaving Anchorage schools, and it could mean a loss of millions of dollars in revenue this year for the district, according to administrators.

The Anchorage School District could face, at a maximum, a $30.1 million decrease in revenue this fiscal year due to the “significant” decline in enrollment, according to a presentation Tuesday by chief financial officer Jim Anderson to the school board’s finance committee. But it is impossible to know what the deficit will actually be until later in the year, he said.

“We could have a very low deficit this year all the way up to a $30 million deficit, depending on — on the number of students we have,” he said to the full school board at its meeting Tuesday. “There are some bigger unknown variables that we simply don’t have the answer.”

Anderson presented to the committee multiple scenarios based on factors including enrollment changes and possible changes the state legislature could make to how schools are funded.

In early August, enrollment was down by about 5,000 students from the previous year. As of Monday, that deficit had shrunk to 4,000 fewer students than at the same time last year, according to district data presented at the meeting.

[Related: Ahead of an unusual school year, registration in Anchorage schools points to dropping enrollment]

There is still time left for students to register, and administrators expect the number of students enrolled to fluctuate throughout the coming first quarter.

Andy Ratliff, senior director of management and budget, said that it’s difficult to predict just what parents will choose and that some may be waiting to see what changes as the pandemic continues before they enroll their children.

Still, 2,736 students had fully unenrolled from the district as of Monday, Anderson said. More than 1,000 of those students have switched to state home schools, data from the school board’s finance committee shows.

That switch to home schools is happening statewide and impacting school districts across Alaska, Ratliff said.

Another 1,000 students who have remained in the district are moving from their neighborhood public school to a district home school program, which will also impact the district’s finances, Anderson said.

On average, an Anchorage school receives about $10,000 in state and local revenue per student. Its home schools receive about $6,500 per student, according to Anderson’s presentation.

Administrators say the exodus of students is in part due to the drastic impact that the coronavirus pandemic has had on education, as classes begin Thursday online-only and more families have sought home schooling options. But the financial impacts of the pandemic are likely to continue -- and worsen -- by fiscal year 2022, superintendent Deena Bishop said Tuesday at the finance committee meeting.

Anderson said the board could also be dealing with a $30 million deficit when building the budget for next year.

Exactly how the departure of the students this year will impact the district’s finances will depend on several factors, including how much more pandemic relief money schools receive from the federal government and the state, Anderson said.

The number of students with “intensive needs” enrolled in the district is also far below what had been predicted, he said. If the district loses 100 of those students, it would result in a loss of about $9.5 million, he said.

[Q&A: Anchorage schools are online. So how will it work?]

It is possible that the district will lose 5% or more of its average number of students enrolled compared to last year. If that’s the case, a “hold harmless provision” in Alaska statute could kick in and ease the loss in funding, bringing back 75% of what would have been lost

It’s not clear yet how many students the district has to lose before the hold harmless provision is triggered, but the district estimates that number to be between 2,600 and 2,700 students, Ratliff said.

But at this point, the district will not know final enrollment numbers until after the annual count, which happens during a 20-day period in October and is a number later certified by the state. That count is then used as part of a complex formula that ultimately decides the district’s funding.

The district passed its operating budget for the year in March, Anderson said. The state funds the district starting in July based on a prediction of the count that occurs in the previous year. When the state certifies the count in January, it resets the annual budget for each district and adjusts payments for the remainder of the school year, he said.

The school board will consider a resolution that would support pursuing options to help in “averting this crisis,” said committee chair Starr Marsett. Some of those options include pursuing legislative changes to how schools are funded at the state level.