Chances are ‘slim’ that Anchorage students can return to classrooms before January, superintendent says 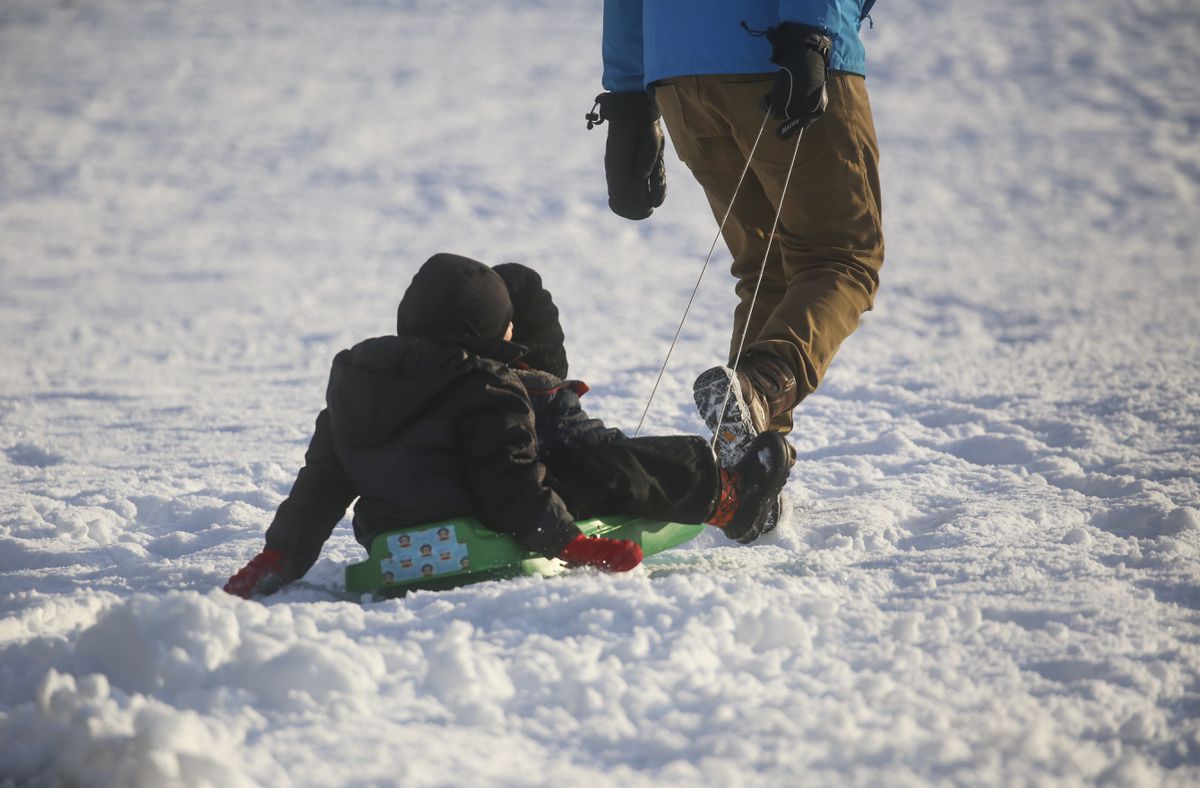 Thomas and Samuel Kushner ride in a sled, pulled by Adam Kushner, to play in the snow outside Inlet View Elementary School in Anchorage on Nov. 9, 2020. (Emily Mesner / ADN)

Thomas and Samuel Kushner ride in a sled, pulled by Adam Kushner, to play in the snow outside Inlet View Elementary School in Anchorage on Nov. 9, 2020. (Emily Mesner / ADN)

Update, Sunday, 11:00 a.m.: The Anchorage School Board will no longer consider postponing all classes, including virtual school, through the holidays, during its meeting on Monday, Nov. 16.

There are only a few weeks of school left before New Year’s, and as the holidays draw near, officials say it’s increasingly unlikely that Anchorage schools will open for any in-person classes before January.

Anchorage School District superintendent Deena Bishop had planned to begin phasing some students back into classrooms starting on Nov. 16. But last Sunday, she postponed the plan without setting a new school start date, citing the accelerating COVID-19 pandemic and difficulties staffing local hospitals.

On Thursday, Gov. Mike Dunleavy issued an emergency alert asking local governments and organizations to work remotely due to the escalating pandemic. In response, some Alaska school districts either announced closures or extended closures, though the governor later clarified he was not directing schools to close.

In an emailed statement last week, Bishop said “the likelihood we can get back in is slim” before the holidays.

But she also said she will advocate for having classes in school buildings as soon as possible.

“We are ready once we receive the green light from the medical professionals that their work will not be impeded,” Bishop said.

On Saturday, the state health department reported a record 745 new COVID-19 cases across Alaska. Of those cases, 489 involved residents of the Municipality of Anchorage, and more than 8,200 Anchorage-area residents were considered to have active coronavirus infections.

Following the governor’s alert, district spokesman Alan Brown confirmed that Anchorage schools would forge ahead with plans to bring kids back to schools as soon as community conditions allow.

On Friday, in an email to staff and families, Bishop echoed the governor’s message and called on the community to prioritize getting students back in to schools and to do its part in mitigating virus spread.

“From my educational vantage point, our children are carrying too much of the pandemic burden by not being given the opportunity of in-person school,” she wrote.

[Alaska is seeing a serious COVID-19 surge. Where are people getting it? Just about everywhere people mix.]

The holidays have been “weighing into the conversation” as Anchorage school officials look ahead to the next opportunity to bring students back, said Anchorage School Board president Elisa Vakalis.

Students, school staff and their families are likely to travel and socialize over the holidays, and some board members worry that it will increase the chances of the coronavirus spreading in schools.

At the most recent school board meeting, member Starr Marsett called for the board to consider postponing all classes, including virtual school, through the holidays. (Marsett is also in favor of opening schools for all students, and additionally called for the district to return students to in-person school by February.) Marsett’s proposal is on the agenda for the next school board meeting on Nov. 16.

Marsett in an interview Tuesday said she doesn’t think it’s necessarily a good idea to postpone all school, but it could give schools the necessary time to prepare for an in-person start in the new year.

“I just want to open up the discussion,” she said.

Vakalis said halting school entirely until after the holidays could give working parents a break from keeping track of at-home lessons during the busy holiday season, and would allow families and school staff to travel and then quarantine before going back into buildings.

There are only 14 days of school after Thanksgiving before the next holiday break begins, and those school days could be added on at the end of the year, when it may be safer to hold in-person classes. The school year could be extended into June.

But that’s just one possible scenario the board could consider, Vakalis said. What they’re really looking for is input from the community, she said.

Other school board members reached for this story, Margo Bellamy and Andy Holleman, were surprised by Marsett’s proposal. Bellamy said she is uncertain about the idea and needs more information.

Vakalis said, “It sounds like a good idea, but maybe it’s not the best idea."

“We have to make the room and a space to have the conversation, because we’re in unchartered waters,” she said.

There were 68 active cases of COVID-19 among staff and students in the Anchorage School District as of Thursday, according to district tallies. There were also 219 people in quarantine after having close contact with a COVID-19 positive person.