This year, an Anchorage program to help struggling students graduate is confronting a much greater need 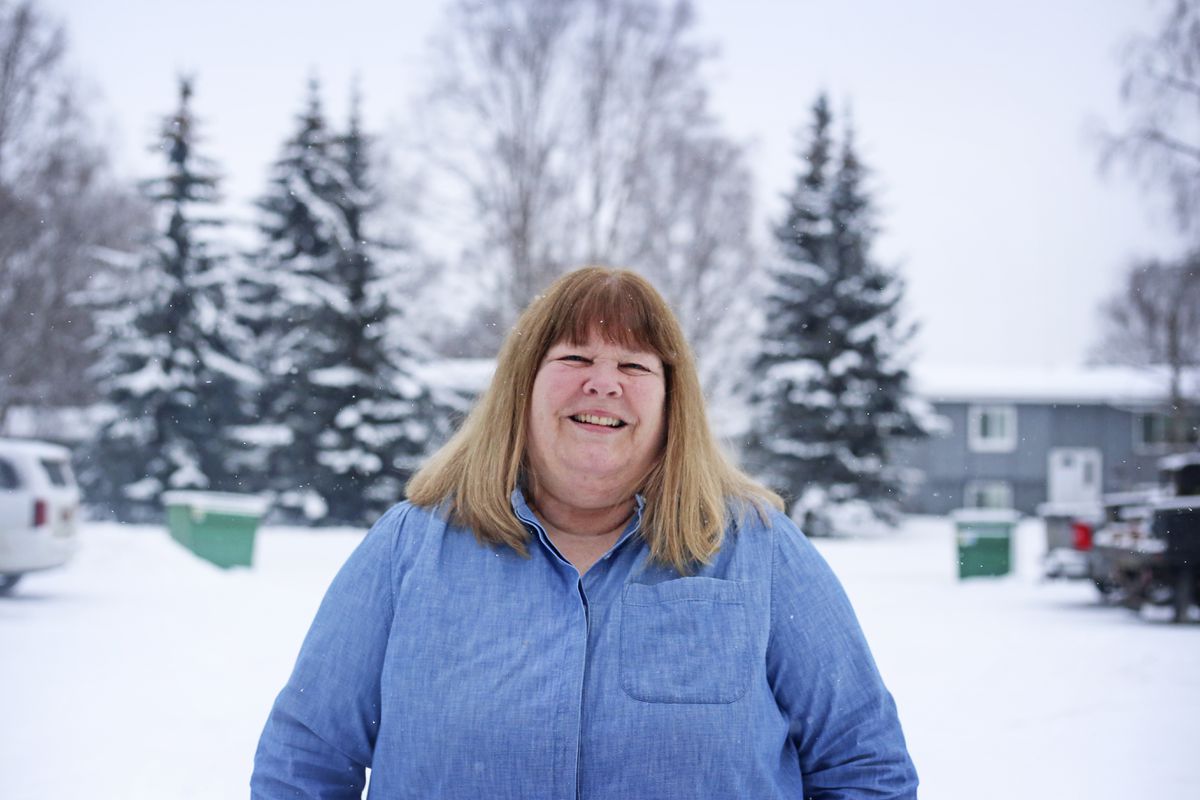 Barb Dexter is a secondary teacher specialist with the Child in Transition program, photographed in Anchorage on Tuesday, Dec. 15, 2020. She also helps coordinate The Back on Track program which is a credit recovery program for students who are at high risk of not graduating. (Emily Mesner / ADN)

Barb Dexter is a secondary teacher specialist with the Child in Transition program, photographed in Anchorage on Tuesday, Dec. 15, 2020. She also helps coordinate The Back on Track program which is a credit recovery program for students who are at high risk of not graduating. (Emily Mesner / ADN)

Last week, Anchorage teacher Barb Dexter received a text from one of her ninthgrade students and stopped speaking midsentence during an interview. It was only 14 degrees that day. The student, who is homeless, was stuck outdoors with a young sibling and nowhere to go.

“I have to make sure that she is safe,” Dexter said, and paused the interview.

Dexter works for the Anchorage School District, but she isn’t your usual high school teacher. She’s both a teacher and a social worker, in charge of a program called Back on Track, which works with high school students who are at the greatest risk of not graduating.

Dexter drops off groceries to students and their families. She makes phone calls and knocks on doors to track down students when they don’t show up to class. She helps families access resources like grocery gift cards, gas cards, food stamps and rental assistance programs. She connects students to health care and optometry.

In the case of the homeless student outdoors, Dexter called Alaska 211 and the family was placed into the Emergency Cold Weather Shelter program, with food and a safe place to stay.

Back on Track is designed to seek out some of the district’s most vulnerable high school students. And as the pandemic further strains already struggling families and children, it is being tested like never before.

“It’s been a challenge for all kids, but when they’re already facing life challenges of the most basic needs, it’s created more crisis in their lives,” said Catherine Curtis, director of education impact for United Way of Anchorage.

‘You can’t learn if you’re hungry’

Back on Track is run as a partnership between the school district, United Way and Covenant House Alaska, a youth shelter and services center in Anchorage. It’s funded through grants from AT&T, BP and the Rasmuson Foundation, money from Anchorage Rotary and the municipality, along with private donations, Curtis said. The program serves students in the ninth through 12th grades and is in its fifth year.

Many of Back on Track’s students are homeless. Some are in foster care. Others have experienced serious illness, injury or perhaps the death of a family member. Some children might be caregivers for relatives or siblings. Almost all — about 98% — are classified as economically disadvantaged, Curtis said.

Dexter and others are “working daily to figure out what these kids need in order to be able to focus on learning, because so many of them have life challenges that are really adult challenges the kids are shouldering,” Curtis said.

Back on Track provides small classes during the day and night classes, giving flexibility to students who work or who are caregivers.

What makes the program unique, though, is the “wraparound services” the program provides. Stress, homelessness, hunger — they all make it difficult to learn, much less attend school, Curtis said.

Normally, the program’s classroom is located in Covenant House.

“We call it the transition classroom because the plan isn’t for them to stay there,” Dexter said. Many students eventually return to their regular school.

But the district has been online-only since March due to the pandemic. Classrooms are virtual.

Not only is that making school more difficult for already struggling students, in many cases the pandemic is exacerbating already difficult life circumstances.

Keoni Sanele, 17, a Back on Track student, had been out of school recovering from a surgery after tearing his ACL, in the months before the pandemic reached Alaska in March.

“I don’t know if you can imagine — I was hurt. And I went back to school and then school closed down,” Sanele said. “Then I had to adjust to online school that fast. I wasn’t ready.”

The pandemic has magnified the challenges Back on Track seeks to address, Curtis said.

This Thanksgiving, Dexter brought a family groceries after finding out the only food that they had to eat that day was a turkey donated by the school district. On another day, the parent contacted Dexter because the children had had nothing to eat, she said.

Dexter is seeing more kids who are hungry during the pandemic, and the program has been connecting more kids and their parents with grocery support and referring them to rental assistance programs, Dexter said.

“It’s always vital work, but it’s more now so than ever,” Curtis said. The pandemic has “caused more people to fall into these gaps of service that really become more like chasms.”

Because school is online, if students don’t log into classes, it can now be more difficult to reach them. The program has found low-cost phones and plans so teachers and tutors can keep track of students and keep them connected, Dexter said.

It has also provided students with headphones with microphones so students logging into class from noisy hotel rooms and living rooms can talk uninterrupted and focus.

In some cases, the program has provided fold-out desks for students so they can have a space to work, Dexter said.

“As the needs come up, we just are finding ways to meet them as best we can, in ways that work with kids’ lives,” Curtis said.

Students are referred to the program by counselors and principals from across the district. Dexter said the program is getting more requests, particularly for its daytime program, which typically serves younger high schoolers.

But that program is already at capacity, she said.

David Mayo-Kiely, program coordinator for the district’s Child in Transition program, said that he and others in social services are bracing for a “tsunami” of need as things that have acted as “lifelines” for families, such as the eviction moratoriums and rental assistance programs, come to an end.

“Families are struggling now,” he said. “It’s only going to get worse before it gets better, unfortunately.”

‘I never thought I would make it to my senior year’

Of the more than 960 ninth to 12th grade students that have been served by Back on Track so far, 479 seniors have graduated, Curtis said. Some are still in school, but no longer in the program, having returned to their regular classes.

For Sanele, the 17-year-old student in the program’s night class, Back on Track has helped him find a new career trajectory.

“I never thought I would make it to my senior year,” Sanele said.

By the time Sanele was back as a freshman at West High School, he was about five months behind in his schoolwork, he said. Sanele had a hard time in school while the family sometimes had a hard time making ends meet.

So he entered Back on Track’s program, and he recovered missing credits through its summer school. The program helped to keep him fed while his single mother was between jobs.

Sanele eventually transferred to AVAIL, an alternative high school program. But as a football player for West, he twice tore his ACL, a knee joint ligament, and went through two surgeries. He missed even more school due to his injuries and fell further behind.

Then the pandemic shut down school as he knew it.

But Dexter and the other staff at Back on Track were there to catch him, he said.

”They never gave up on us,” Sanele said. “They stay on top of our work, and just our life — basically keep us in order, just by helping a lot of us.”

Next semester, Sanele will take his first college course at UAA — the only high school student who has been nominated into a class for training certified nursing assistants at UAA. In spring, Sanele will graduate with a high school diploma.

Sanele said he might want to become a professional caretaker; maybe a nurse. Or maybe he’ll study sports medicine and become a physical therapist. He isn’t quite sure yet, but he wants to go to college.

He has watched a few older friends graduate from Back on Track, and said that inspired him. His grandmother, mother, Dexter and other teachers have inspired him too, he said.

On Tuesday, Dexter stopped by Sanele’s Fairview home to drop off some gift cards for gas. Dexter reassured Talila, Sanele’s mother, that Back on Track would help her son take the next steps forward — finding a job, getting into college and applying for financial aid.