When the pandemic hit, this Anchorage elementary school teacher moved her classroom outdoors 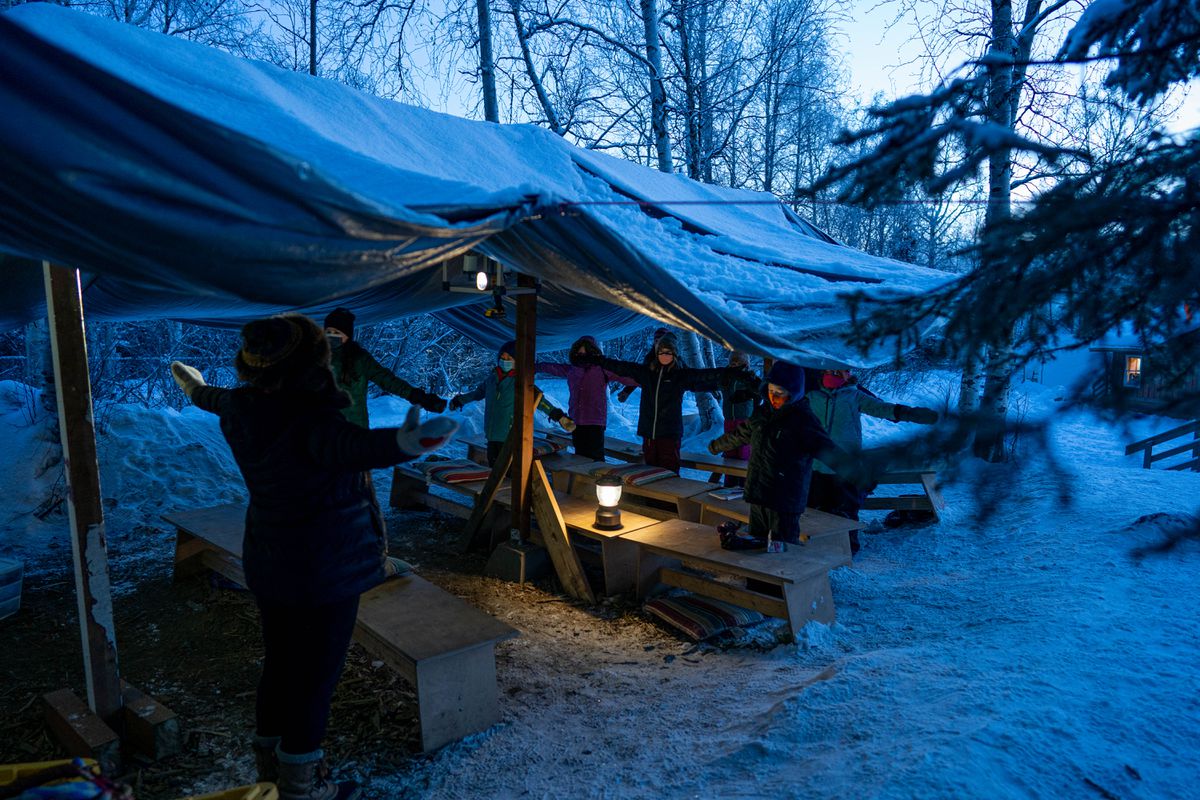 Anchorage Waldorf School 3rd- and 4th-grade teacher Donna Levesque leads her students in a song during a class on Feb. 5, 2021, when the temperature was 5 Fahrenheit. (Loren Holmes / ADN)

Anchorage Waldorf School 3rd- and 4th-grade teacher Donna Levesque leads her students in a song during a class on Feb. 5, 2021, when the temperature was 5 Fahrenheit. (Loren Holmes / ADN)

On a recent Friday, Donna Levesque began her third and fourth grade class like she does most days, by leading them in a song. The students stretched their arms and sang through their masks, which they have grown accustomed to wearing since the start of the pandemic. Their breath was visible in the cold air, but nobody was complaining. It was 5 degrees, and their class was outside.

Levesque teaches at the Anchorage Waldorf School, an East Anchorage private school that emphasizes a connection to nature and often uses the outdoors as an extension of the classroom.

But for Levesque, this year the situation is reversed — the indoors is the extension of her classroom. When the school year began last August, with all the pandemic-related constraints placed on in-person learning, she decided to set up her classroom outside.

Like all schools, Anchorage Waldorf has a COVID-19 mitigation plan. Everyone eats outside in a tent, and mask-wearing is mandatory. Windows are cracked and fans help circulate the air.

Lavesque has taken it further than most other teachers.

Now, benches and a chalkboard stand between birch and spruce trees, and a tarp is stretched over the area to keep snow from falling on the students.

“This is the first year I’ve taught outdoors completely,” she said.

When it is in the single digits or below, like it was in early February, the students will go inside for writing and drawing exercises, but everything else still happens outside.

“This class enjoys being outside,” said Levesque. “They’ve always been outdoor sort of children. They are able to take in all of that nature that we wouldn’t be able to do indoors.”

The Anchorage School District conducts outdoor recess until the wind chill factor is minus 10 Fahrenheit, and some teachers let their students outside for short brain-breaks in addition to recess, but there are no regular outdoor classes, according to spokeswoman Lisa Miller. As a private school, Anchorage Waldorf does not have to follow ASD guidelines.

Levesque is careful to keep her students active. After a short lesson under the tarp, the class moved to the parking lot to jump rope. Then it was back to the tarp, where she handed out cups of tea, brought that morning by parent Annette Marley.

For Marley, the outdoor classroom experience has been positive. She said her daughter has become more hardy.

“When it’s 20 degrees or above, she feels elated and says it’s very warm,” said Marley. “She’s noticing little things like when the sun rises, and different birds that are out.”

The outdoor classroom did take some getting used to, said Marley.

“At the beginning of the year when it started to get cold, they were underdressed and complaining,” she said. “But they’ve learned very quickly how to dress accordingly. In the morning my daughter puts on about four layers, so she’s totally prepared and doesn’t really complain about being cold.

“I think it’s going to be an incredible reference point for her, later on in life, to be able to say I went to school outside all year, during COVID, in Alaska,” said Marley.