Areas of Juneau along the Mendenhall River remained under a flood warning through Saturday morning after Mendenhall Lake reached its highest level ever following the release of an ice-dammed lake above nearby Mendenhall Glacier.

The lake reached a record level of 11.99 feet at about 8:15 p.m. Friday and had begun to drop along with the river, the National Weather Service in Juneau said.

Juneau police dispatchers said no homes had been evacuated as of Friday evening and there were no immediate plans for an evacuation. 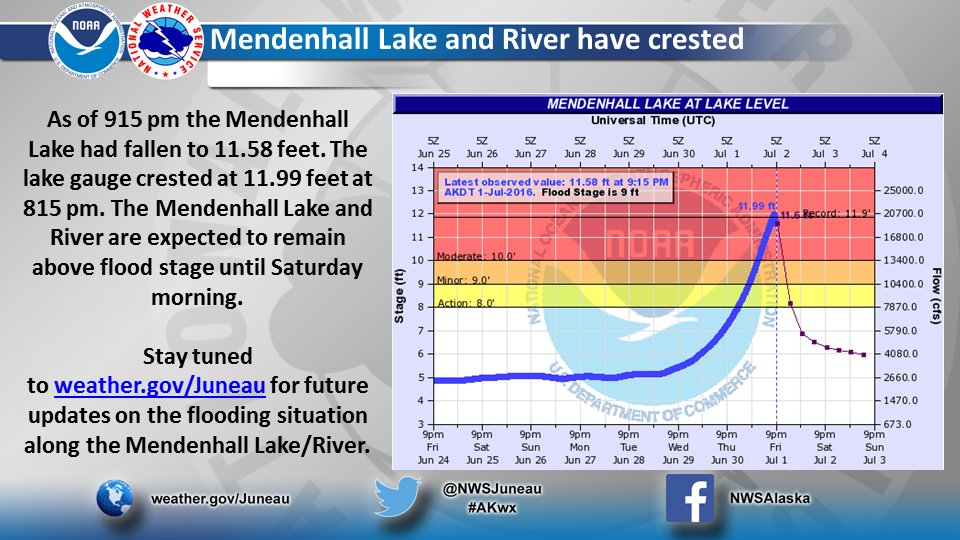 According to the Weather Service warning, which remains in effect until 8:15 a.m. Saturday, water draining from Suicide Basin threatened to raise the Mendenhall River to the same levels it saw during an abrupt release of the basin two years ago.

According to a list of potential impacts posted on the weather service's Alaska Facebook page, the flooding would "inundate" the Mendenhall Lake area, with more than 3 feet of water flooding the campground.

Edward Liske, a meteorologist at the weather service's Juneau office, said Friday morning the View Drive residential area most threatened by the flooding was part of a small neighborhood upstream of Mendenhall Back Loop Ridge.

"There are a few homes in that area that are right along the river," Liske said. "The river is actually rather deeply cut and the flood plain's narrow, so it would take a really high rise to affect a lot of people."

Liske didn't have word on how many people had been using the campground before the Fourth of July.

"It probably was going to be busy before this happened, considering the holiday weekend," Liske said.

Enstar, the largest natural gas utility in Alaska, is being sold

Want rapid results from your garden? Focus on planting these quick crops for prompt produce

University of Alaska faculty will not see raises in July, despite administration’s last-minute attempt