A biologist trapper retires after helping transform the Aleutian Islands 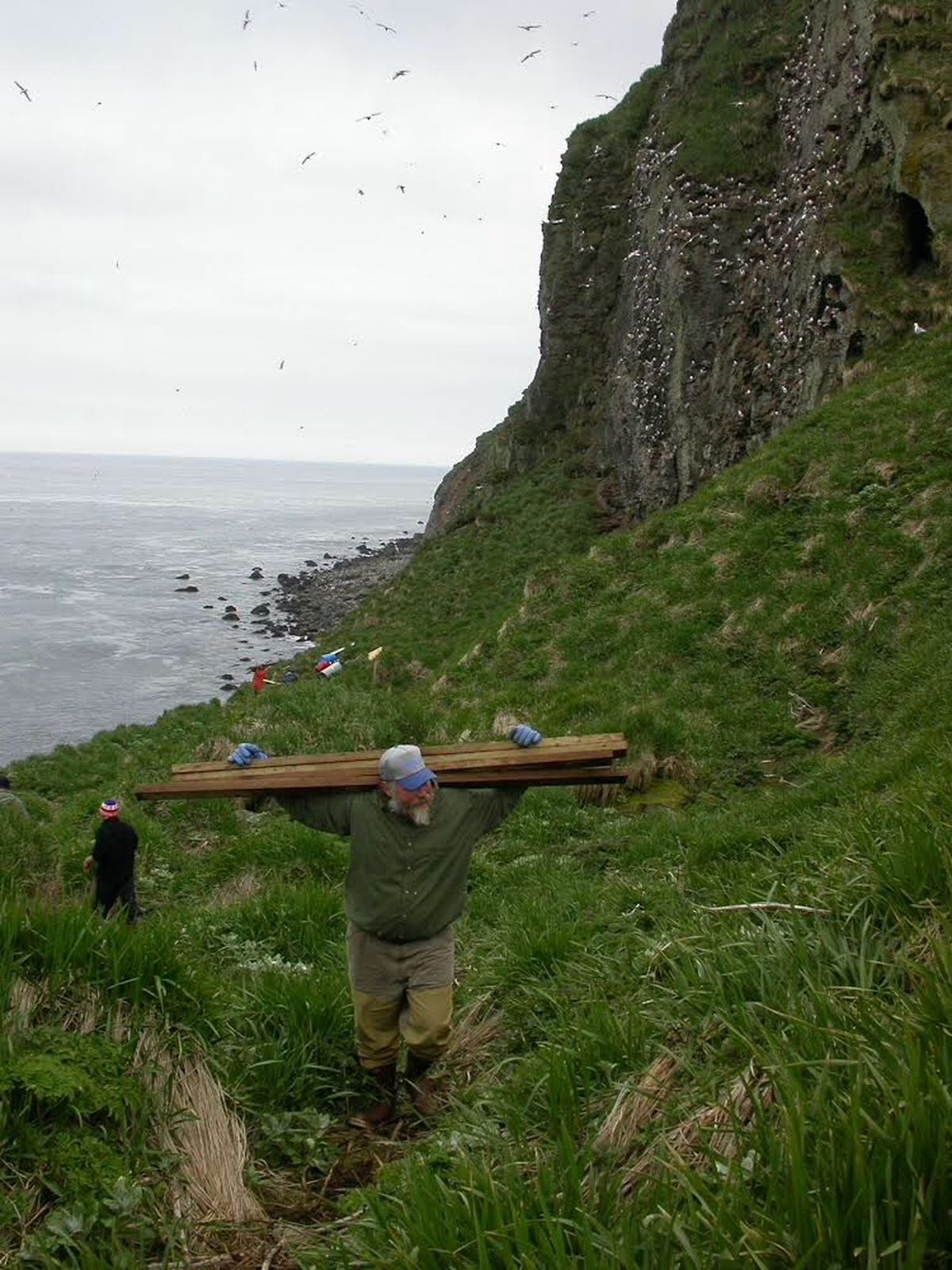 Steve Ebbert hauls lumber for a cabin that refuge staff built on Buldir Island in 2004. (Photo by Ned Rozell)

Steve Ebbert hauls lumber for a cabin that refuge staff built on Buldir Island in 2004. (Photo by Ned Rozell)

On Halloween, Alaskan Steve Ebbert, 56, retired from his job as an invasive species biologist. His longtime mission of removing Arctic foxes and other human-introduced species from the Aleutian Islands has left him with a legacy few of us will match.

"There are hundreds of thousands more birds flying around on the planet because of that work. That's a pretty cool accomplishment," said Steve Delehanty, manager of the Alaska Maritime National Wildlife Refuge, referring to a program that began in the late 1940s. Ebbert took it over in 1995.

Ebbert's job was to reverse another legacy, that of Russian and American fur trappers who, starting in the late 1700s, dropped off a few pairs of Arctic foxes on Aleutian islands. Those foxes, later harvested with their offspring for their fur, ate birds and their eggs, removing birds from some of the richest nesting cliffs and rye grass tangles on Earth.

In 1949, Bob "Sea Otter" Jones, a biologist and World War II veteran hired by the refuge, started removing foxes from Amchitka Island. Since then, refuge biologists and hired trappers have returned 48 islands to their fox-free beginnings, first using poison baits and since the 1990s using traps and rifles.

In 1995, Ebbert stepped into a dream job for someone who as a teenager trapped muskrats and raccoons in Indiana. In the summer of that year, as a start to his career with the refuge based in Homer, he camped on Simeonof Island with three seabird biologists. There, he trapped the last fox that survived a trapping effort the previous year.

From there, the burly biologist with a sourdough's beard removed foxes from different islands in the expansive refuge, which includes the entire sweep of the Aleutian Islands and stretches farther than the distance from St. Louis to San Francisco.

Ebbert remembers his summers by the islands he lived on, learning all the grassy bumps, fox trails, conical volcanic mountains and freshwater streams. 1996 was Seguam. Semisopochnoi was 1997. The next year was Kanaga. Attu was the year after that.

In his 22 years with the refuge, he and his seasonal teams of professional trappers from the U.S. Department of Agriculture cleared 18 islands of foxes. The islands ranged in size from Rootok (3,345 acres) to the farthest island in the chain, Attu (almost a quarter million acres). Put all those islands together and the restored Aleutian land is the size of the Anchorage Bowl.

As the foxes disappeared, the birds returned. Heather Renner is a bird biologist who was Ebbert's supervisor. She remembers visiting Attu in 2003, right after foxes were removed from the mountainous island.

That bird, similar to a Canada goose but with a shorter neck, was thought to be extinct before 1962, when Bob Jones found a few dozen on Buldir, a rugged and isolated island between Kiska and Shemya that had no foxes. Refuge biologists captured a few, bred some in captivity, and later released them on fox-free islands. Today, more than 150,000 Aleutian cackling geese nest in the Aleutians and winter in California and Washington. The bird moved off the endangered species list in 2001.

[With fewer foxes and rats, Aleutians reclaim status as a birding paradise]

Renner thinks more islands could start to resemble Buldir, home of the largest and most diverse bird colony in the Northern Hemisphere. She knows Ebbert had a lot to do with it.

"We all wish we could leave the refuge a better place, and he's one of the people who can retire knowing he did."

She also appreciated that, on a staff dominated by bird biologists, Ebbert saw things through the eyes of that boy who received $7 for every muskrat he pulled from Indiana ditches.

"Steve had a different skill set than your typical refuge biologist," she said. "He was exactly what we needed. And he was always the guy who, if there was an oil spill (like when the Selendang Ayu broke in two off Unalaska Island in December 2004), he'd be the one to drop everything and go. Because of that, he knew the refuge better than anybody."

Over the phone from Indianapolis, where he was visiting his father and brothers on the family farm, Ebbert said his timing for retirement was good, in part because he had trapped himself out of a job.

All of the doable islands with problem foxes have been done, he said. He also designed and helped finish plans to remove European rabbits from Poa Island and hoary marmots from Sud Island in 2010. In 2008, a team of partners killed all the Norway rats on the former Rat (now Hawadax) Island.

One of Ebbert's favorite memories is of a mission he designed to live-capture and transport a special group of birds from Attu to Agattu.

Evermann's rock ptarmigans exist only in the far-west Aleutians. When foxes came to Agattu in the 1800s, the birds disappeared. But they endured on Attu, perhaps because they could hide in the spacious mountains while foxes spent most of their time near the beaches.

In 2004, Ebbert enlisted grouse expert Clait Braun, wildlife veterinarian Bill Taylor and volunteer Pat Pourchot to catch ptarmigans amid the rusting frames of Jeeps and other World War II relics on Attu. Using a 16-foot pole with a slipknot noose on one end and carpets that snagged ptarmigan toes, the men captured 27 birds. The crew of the refuge boat, the Tiglax, then transported the birds across 30 miles of North Pacific Ocean to Agattu, where foxes had been removed 40 years earlier.

The birds have a new foothold on the island, as many thousands of seabirds and songbirds now do on Aleutian islands that are becoming greener (from the added fertilizer) and louder each summer.

"I think it is one of the great conservation stories," said Jeff Williams, assistant manager of the refuge who has stepped foot on each of the affected islands. "It has returned to what it was."

Trapping foxes off islands large and small "seems easy to do, but it's not," Williams said. "You need a person with drive and persistence. Tanaga, for example, took like six years of going back there to get the last couple pairs of foxes."

Ebbert will miss living on islands few people will ever see, but knows he will enjoy the lifetime of Saturdays ahead. He will also miss working on the Tiglax, with its able, professional crew, including a cook serving up fine breakfasts and dinners.

He forged a special bond with the hired trappers with whom he would share an island for a summer. For entire summers, pairs of men would be in their own territories, executing their duties on a wet, windy, often chilly island. Just like old-time trappers, two or three times each summer the trappers would walk to an island landmark to meet up with the others for a "rendezvous."

When Ebbert remembered those men, he might have been speaking of himself.

"No matter how old they are, they'll be able to point at a map and tell their kids and grandkids, 'I made that island fox-free.' "