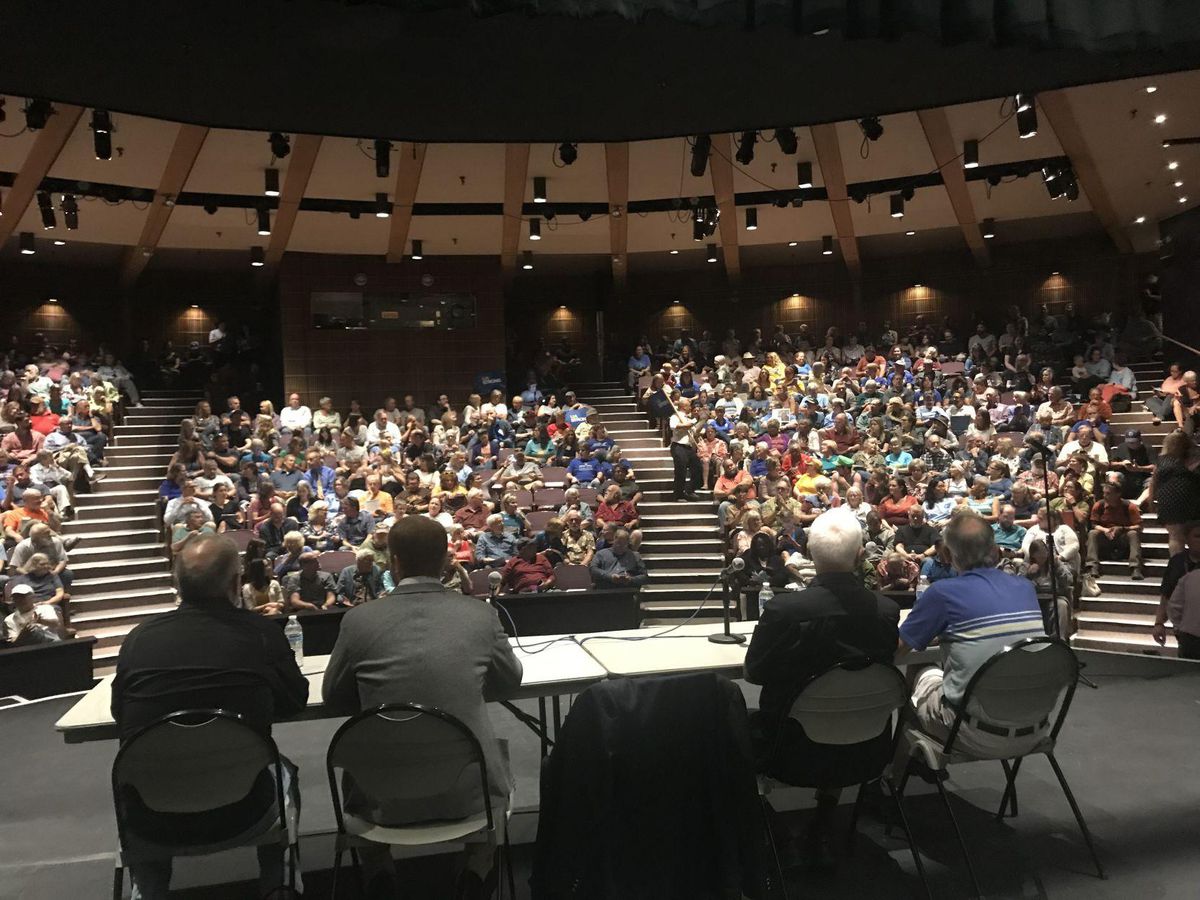 Hundreds gathered in and outside the Pioneer Park Civic Center on Wednesday evening, largely to speak out against the more than $400 million in operating budget funding vetoed from the budget by Gov. Mike Dunleavy on Friday.

Fairbanks Republican Reps. Bart LeBon and Steve Thompson and Fairbanks Democratic Reps. Grier Hopkins and Adam Wool, along with House Speaker Bryce Edgmon, I-Dillingham, who flew in from Southeast Alaska to hear from Interior constituents, heard testimony from more than 80 residents throughout the evening.

The Civic Center theater, which is able to seat 380, quickly reached capacity before the event began, with another nearly 300 or so residents waiting in line outside the venue. Several individuals, a member of Hopkins’ staff, inside the event provided a livestream for those outside to watch throughout the evening.

Dozens of others shared stories of University of Alaska education and work, health care-related concerns, personal struggles with disability and mental health and fears of job or health care loss, or both, should the Legislature fail to override the governor’s vetoes.

Julie Maier, an Alaska resident of more than 40 years and a math professor at the University of Alaska Fairbanks, told legislators that if the cuts go through she will likely urge her children to only achieve an associate degree at UAF before encouraging them to look for school outside the state.

“I support an override of the vetoes, every single one of them,” Maier said. “These vetoes do not reflect Alaskan values. Not surprising, Dunleavy brought in some woman (referencing Dunleavy’s Office of Management and Budget Director Donna Arduin) from out of state who doesn’t know Alaska to create this mess.”

Christina Turman, a lifelong Alaskan and a mother of two children, told the crowd of hundreds in a shaky voice that she felt extremely out of her comfort zone speaking up.

“But for me I’m willing to go out of my comfort zone because I love Fairbanks,” she said. “I’m going to be really honest ... we usually live paycheck to paycheck, we as a family, when we get our PFDs our savings account doubles or triples, but I tell you, that PFD pales in comparison to having an Alaska that I want to raise my children in.”

John George, father of three young boys and program director of UAF’s Fire Science program, told legislators that even though he is a self-described conservative, he would prefer an income tax to the slashing of government services.

A handful backed the governor’s slashes to the university, health and social services, rural public safety and other state services.

One Fairbanks man, who didn’t state his name during his testimony, urged legislators to support the governor’s vetoes in order to fund a full $3,000 dividend, encouraging members of the crowd to give a portion of their full dividend back to state services through the use of the PFD application’s Pick.Click.Give donation function.

[At UAA, governor’s budget cut could lead to loss of about 700 jobs and 40 degree programs]

Of the more than 300 in the theater at any given part of the night, there were about 80 testifiers; 65 to 70 individuals who urged lawmakers to override the governor’s vetoes, about eight who voiced support for the budget cuts and a handful of residents who asked questions but did not state a position.

Hot topics of the night included support and criticism of a possible income tax, varying opinion on what amount the permanent fund dividend should be and how to possibly diversify the state’s revenue away from its reliance on the oil industry.

Edgmon took issue with a comment late in the evening, responding to a resident who accused the Legislature of stealing the dividend.

“The hard, cold truth of it all is that the choice that is before the Legislature now is if we were to pay a $3,000 dividend now, some numbers show there will be a zero PFD in five years, so we’re in the position of having to protect the long-term integrity of the permanent fund while at the same time protecting the core services,” Edgmon said. “We’re going to see fundamental change in how this state exists ... I’ll take the political hit from people who don’t understand that if you have a $3,000 PFD today you’re damn well not going to have a PFD tomorrow.”

K-12 funding was not the subject of Dunleavy’s vetoes, though Dunleavy has proposed a cut of about 25%. The funding is the subject of a separate dispute between the governor and the Legislature.

The public meeting went nearly an hour and a half over the set two hours originally allotted. Thompson had to leave the event early to attend to a family matter, and Edgmon stayed as long as he could without missing his flight home. Hopkins, LeBon and Wool remained in the theater until all who had lined up to testify had been heard.

According to staff working the door and running a sign-in sheet, 764 Fairbanks-area residents signed in. Hopkins later reported more than 1,000 were tallied to have watched the Facebook livestream of the event posted by one of his staff to the event page throughout the night.

Healy Republican Rep. Dave Talerico, the Interior’s only member in the House Republican minority, did not attend Wednesday evening’s meeting due to a family emergency, according to Thompson. Talerico held his own constituent meeting the night before in Two Rivers and before that in Salcha.

The special session is scheduled to begin July 8. In maintaining a stiff rejection of Dunleavy’s call for the session to be held at Wasilla Middle School in the Mat-Su region of the state, Thompson told reporters Wednesday afternoon that at least 39 lawmakers plan to convene in Juneau on Monday. Twenty-one House members are required to be present in order to achieve a quorum. According to Wool, there will be a quorum for the House present in Juneau.

There was no immediate information on how many senators are planning to attend.

Opinions differ on the legality of the Legislature’s rejection of the governor’s call for a special session to be held in Wasilla. According the Dunleavy administration, state law allows him to designate the location of a special session that he calls. According to legislators, the state constitution protects the separation of powers between the executive branch and legislative branch, thus ensuring the Legislature’s power to decide where it meets.

While the constitution explicitly prohibits the governor from suing the Legislature, Alaska Attorney General Kevin Clarkson has mentioned the possibility of lawsuits against individual lawmakers who do not appear in Wasilla on Monday. A judge could agree with Dunleavy and order legislators to show in Wasilla, and Alaska State Troopers could be summoned by the court to round up any who violate the order.

This story was originally published by the Fairbanks Daily News-Miner and is republished here with permission.