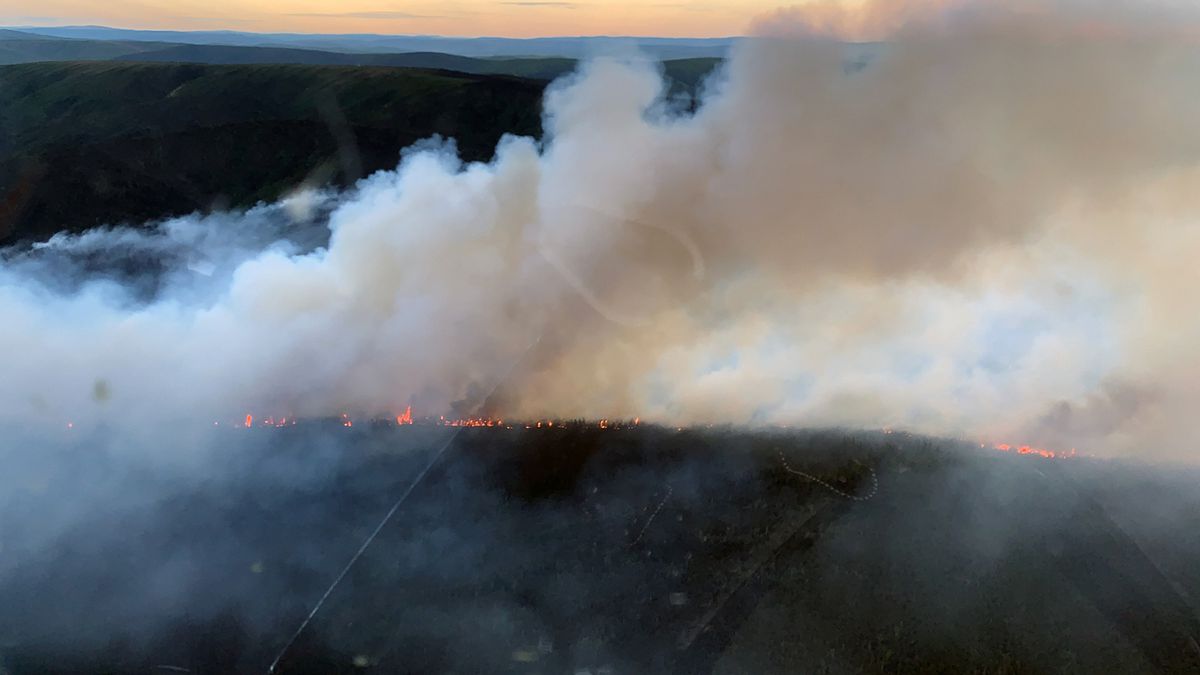 The Isom Creek Fire (#187) burning southeast of the Dalton Highway Yukon River Crossing picked up activity Saturday night June 6, 2020 and created this plume. This photo was taken from a helicopter at 11 p.m. (Photo by Cammy Roy / BLM AFS)

The Isom Creek Fire (#187) burning southeast of the Dalton Highway Yukon River Crossing picked up activity Saturday night June 6, 2020 and created this plume. This photo was taken from a helicopter at 11 p.m. (Photo by Cammy Roy / BLM AFS)

More than 250 firefighters are working to contain a wildfire that had spread across more than 7,500 acres northwest of Fairbanks by Wednesday, said a spokesman for the Alaska Division of Forestry.

The Isom Creek Fire has crossed the Dalton Highway and drivers are urged to use caution, especially between miles 42 and 50, while crews continue to contain the fire, forestry division spokesman Sam Harrel said. There is no intention to close the highway, Harrel said, but there may be delays as crews move equipment or manage heavy smoke in the area. The wildfire also threatened several Native allotments near the Yukon River and a trans-Alaska pipeline pump station, he said.

The fire began Friday afternoon when lightning sparked flames which began to spread among mostly black spruce trees, Harrel said. The blaze grew quickly, fueled in part by high winds and dry conditions. Tim Mowry, a spokesman for the state Division of Forestry, said the winds carried smoke into Fairbanks on Tuesday.

The wildfire was about 10% contained by Wednesday afternoon, although Harrel said it would likely continue to grow. There were roughly 250 personnel helping to contain the fire and Harrel said it had grown to just over 7,500 acres. It’s unclear when the fire could be fully contained, he said.

“We don’t want it to get any bigger, but the reality of the situation is it’s probably going to add a few more acres,” he said.

Small, isolated storms hit the area Tuesday and continued Wednesday. Harrel said he did not expect the weather to improve in coming days. Although the storms dropped rain, Harrel said it was often not enough to affect the fire. The storms instead exacerbated the situation because of the erratic winds that accompanied them.

Crews attacked the fire for the last few days by air, using water-scoopers, air retardant tankers and helicopters with water buckets as well as deploying firefighters on the ground. Difficult terrain made it challenging at first to find a usable water source, the forestry division said, and much of the water was dropped by helicopter buckets and airplanes.

Crews worked to burn vegetation ahead of the fire Monday and created a fire line to keep the blaze from spreading west, where it could reach Alyeska Pump Station 6 and several Native allotments. The wildfire did reach the trans-Alaska pipeline, but it was not damaged, as it was built to withstand the flames.

On Tuesday, crews stationed boats along the river and set up a system of hoses to deliver water to allotments about 8 miles from the bridge. Sprinklers were set up around structures to provide protection.

While recent rain has reduced high wildfire risks in much of Southcentral Alaska, Mowry said, conditions are still dry farther north in the Interior, especially in the Fairbanks area. Burn permits were suspended statewide earlier this year due to increased wildfire risk and concerns about resource availability for firefighting because of the COVID-19 pandemic; that suspension has been lifted for all areas except the Kenai Peninsula.

Harrel said roughly 26 personnel from the Bureau of Land Management arrived from the Lower 48 to help fly forestry helicopters. They were all tested for the coronavirus when they entered Alaska and quarantined while they awaited their results before they were allowed to work.

Alaska routinely relies on assistance from Outside to fight wildfires, but Mowry said it’s so far been a relatively quiet year for wildfires.

There were several other fires across the state Wednesday, including a cluster of four fires in the southwestern portion of the state that pushed heavy smoke into Yukon-Kuskokwim Delta communities the day before. Mowry said the fires are mostly on Limited Protection land and did not pose a threat to any structures, but are being monitored in case they were to spread toward any Native allotments. The fires were started more than a week ago by lightning, he said. The largest of the fires spread across nearly 11,000 acres Tuesday.

As of Wednesday, there have been 190 wildfires throughout the state that have affected nearly 67,000 acres of land this year, according to an Alaska Interagency Coordination Center report.