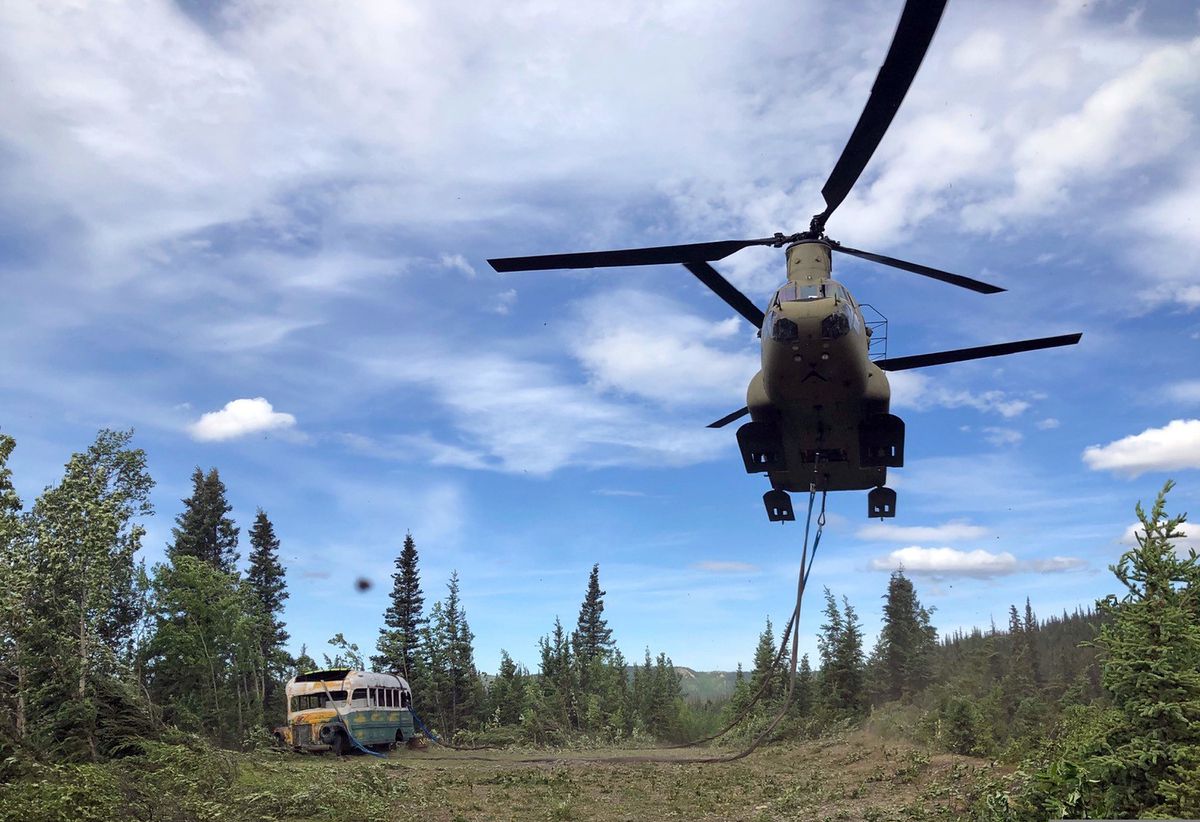 Alaska Army National Guard soldiers use a CH-47 Chinook helicopter to removed an abandoned bus, popularized by the book and movie "Into the Wild," out of its location in the Alaska backcountry on June 18 as part of a training mission. (Sgt. Seth LaCount/Alaska National Guard via AP)

Alaska Army National Guard soldiers use a CH-47 Chinook helicopter to removed an abandoned bus, popularized by the book and movie "Into the Wild," out of its location in the Alaska backcountry on June 18 as part of a training mission. (Sgt. Seth LaCount/Alaska National Guard via AP)

An abandoned bus that attracted travelers into the Alaska wilderness for years, prompting several rescues and deaths, will likely be kept at University of Alaska’s Museum of the North, according to state officials.

The bus, made famous by its depiction in the 1996 best-selling book “Into the Wild” and a later feature film, was airlifted last month from its previous location west of the Teklanika River near the Stampede Trail, near the boundary of Denali National Park and Preserve, to a secure location.

In a statement Thursday, the Alaska Department of Natural Resources wrote that it intends to negotiate with the Fairbanks museum and that it will be the “likely repository” of the bus.

“Of the many expressions of interest in the bus, the proposal from the UA Museum of the North best met the conditions we at DNR had established to ensure this historical and cultural object will be preserved in a safe location where the public could experience it fully, yet safely and respectfully, and without the specter of profiteering,” DNR Commissioner Corri Feige said in the statement.

The bus sat for 60 years about 25 miles west of the Parks Highway. In 1992, 24-year-old Virginian Christopher McCandless stayed at the bus for 114 days and died, a journey detailed in the famous book and film.

The bus later gained worldwide notoriety and became a site of pilgrimage for people following in McCandless’ footsteps.

Some travelers died or became injured, lost or trapped trying to visit the bus, prompting some local officials to call for its removal. Two people died during separate incidents in 2010 and 2019, according to the department.

A 26-year-old Brazilian man was rescued from the area in April after running out of food and becoming trapped when ice over the Teklanika River melted. Five Italian tourists were rescued in February. In the 2019 incident, a 24-year-old woman from Belarus died crossing the river after spending two nights at the bus.

Feige said in the statement that the department received dozens of ideas and proposals for display of the bus, but that the museum’s proposal increases public safety, has a minimal financial impact on the state and is respectful to the families who lost loved ones.

Museum director Pat Druckenmiller said Thursday that when staff saw the bus had been airlifted from the backcountry, they were struck by its historical significance and decided to create a proposal.

Druckenmiller said the museum’s team will do “stabilization work” on the bus — not the same as a restoration — that will make it safer, keeping it in its current state and ensuring it doesn’t degrade further.

There will be some fixing to do, he said, such as patching the holes that were cut into the roof for the cables that were attached for airlifting.

The museum will also create a community advisory team that will help put together an interpretive plan.

“It’s a bus that means a lot of different things to a lot of different people,” Druckenmiller said. “We want to respect that and ultimately present an outdoor exhibit of the bus that would be freely available to the public for them to enjoy and come and reflect upon.”

Finalizing a curation agreement with the state may take a week or two. It will be at least one to two years before the exhibit is ready, he said.

Druckenmiller said he hopes that visitors will be able to go inside the bus, but the museum needs to examine it and make sure that it will be a safe part of the exhibit.

“It’s of really international significance,” he said. “People from all over the world have come to see this.”