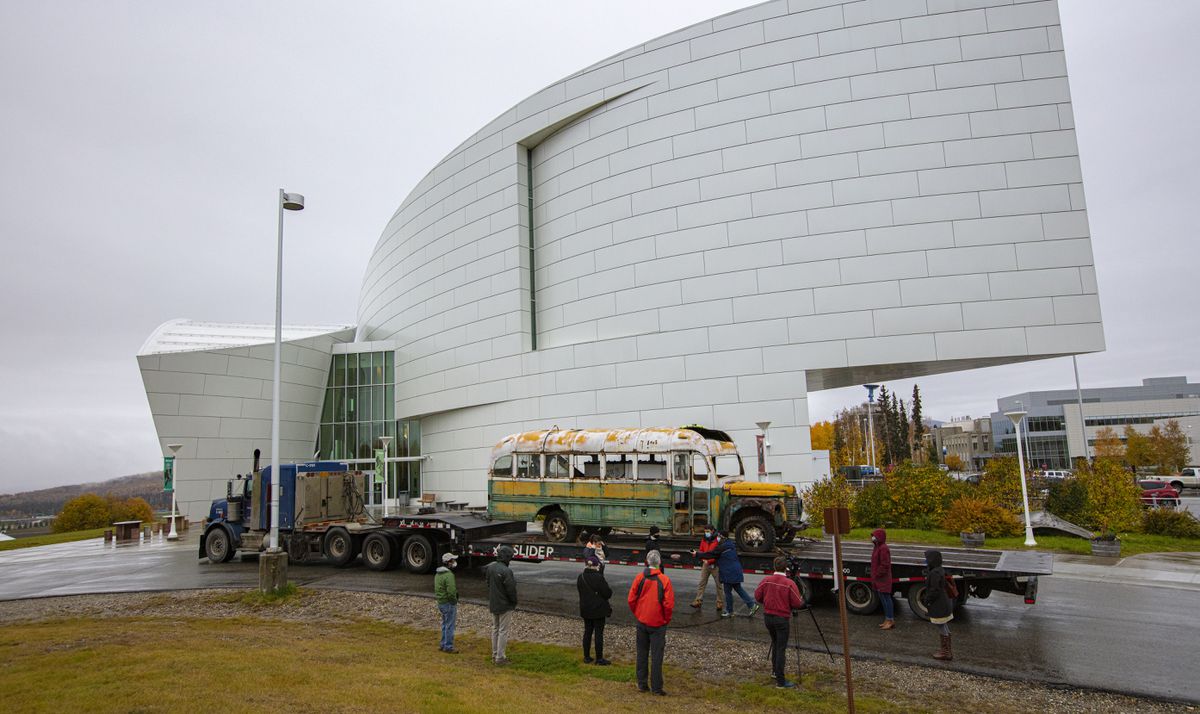 Bus 142 is in front of University of Alaska Museum of the North en route to the conservation yard, Sept 24, 2020. UAMN Director Pat Druckenmiller and Angela Linn, UAMN Senior Collections Manager for Ethnology and History, speak with press. (Photo by Roger Topp / UA Museum of the North)

Bus 142 is in front of University of Alaska Museum of the North en route to the conservation yard, Sept 24, 2020. UAMN Director Pat Druckenmiller and Angela Linn, UAMN Senior Collections Manager for Ethnology and History, speak with press. (Photo by Roger Topp / UA Museum of the North)

The dilapidated “Into the Wild” bus made notorious by a stream of sometimes ill-fated wilderness visitors drawn to its remote locale near Healy has arrived at its final destination.

As announced Thursday, the 1940s-era former city bus has arrived in Fairbanks, where conservation work is underway at the University of Alaska Museum of the North. The bus will be on permanent display at the museum once work is done, at least two years from now.

The bus sat about 25 miles west of the Parks Highway, accessible only by crossing the unpredictable Teklanika River. It was the site of the 1992 death of 24-year-old Virginian Christopher McCandless, who lived for 114 days at the bus before perishing, a story depicted in Jon Krakauer’s 1996 book, “Into the Wild,” which was adapted into a 2007 feature film by Sean Penn.

“This is a surreal day, but certainly a positive one,” Carine McCandless, his sister, posted on her Facebook page Thursday.

In June, the Alaska Department of Natural Resources in June — with help from an Alaska Army National Guard airlift — removed the bus from the spot where it was abandoned off the Stampede Trail. The agency and museum signed a formal agreement this week that assigns long-term stewardship of the bus to the museum, officials say.

The move came after years of concerns that the bus posed a hazardous attraction to unprepared travelers drawn by the legend surrounding it.

The bus served as a shelter for hunters and hikers for years, but more recently started attracting numerous travelers enamored with McCandless' story who ended up needing rescue themselves. Between 2009 and 2017, there were 15 bus-related search and rescue operations by the state, Alaska officials have said.

Two died: a 29-year-old Swiss woman who drowned in 2010 trying to ford the Teklanika and a 24-year-old Belarus woman last year who struggled to cross the rain-swollen river after spending two nights at the bus. Her family later asked Denali Borough officials for a bridge across the river, prompting them to formally request that the state move the bus.

Once airlifted in June, the bus spent the last three months in a secure state storage yard near Eagle River, according to DOT spokeswoman Shannon McCarthy.

People driving the Parks Highway in Mat-Su on Wednesday spotted the bus as it traveled north out of Wasilla on a state flatbed truck. A Facebook post about the sighting attracted more than 100 comments — and reinvigorated longstanding arguments about whether the bus should have been allowed to stay and exactly what killed McCandless.

[The beatification of Chris McCandless: From thieving poacher into saint]

The museum’s preservation and interpretation work is expected to take at least two years, according to an update Thursday. The work includes cataloging the bus and objects associated with it, hiring a conservation team that specializes in historic vehicles, and fully documenting the history of the collection.

A fundraising effort is underway.

Once the work is completed, the museum hopes to exhibit the bus in the wooded area north of the museum parking lot, with a short trail and interpretive signs describing its history.