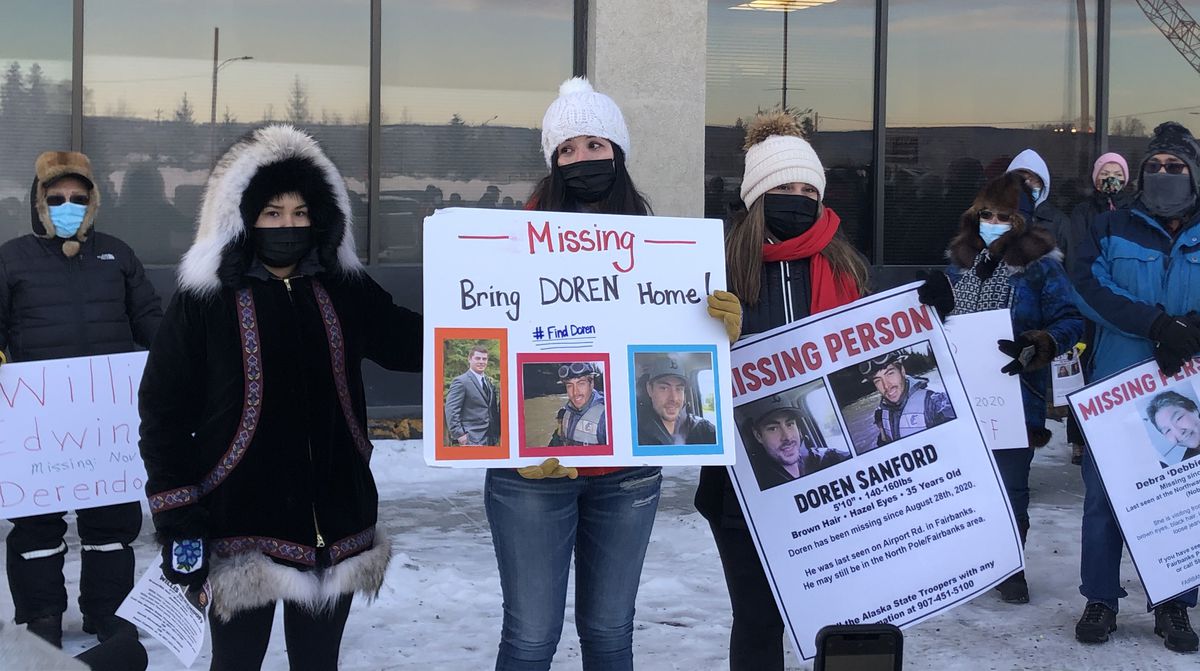 Doren Sanford's family members hold signs with information about the 35-year-old, who's been missing since Aug. 28 while speaking to the gathered crowd in Fairbanks, Jan. 23, 2021. (Sam Ferrara/News-Miner)

Doren Sanford's family members hold signs with information about the 35-year-old, who's been missing since Aug. 28 while speaking to the gathered crowd in Fairbanks, Jan. 23, 2021. (Sam Ferrara/News-Miner)

FAIRBANKS — Hundreds of community members gathered at the Chief Peter John Tribal Building on First Avenue in Fairbanks on Saturday to hold a vigil for an alarmingly high number of people who have gone missing in the Fairbanks area over just the past 10 months.

There were also calls for more transparency with the community from law enforcement about missing persons cases and for local leaders and law enforcement to do more to help, including a specific request that local police try to enlist the help of federal law enforcement.

“We are here to remind the leaders of the community that the community is hurting,” said Rev. Scott Fisher while speaking to the crowd.

Jody Potts, one of the organizers of the vigil, told the people gathered that in an average year five people go missing in the Fairbanks area, but 11 people have gone missing in the area just since May 2020. Five of the missing people are from the Alaska Native community.

“It’s really time, in my view, to be more transparent from the police department, from the state troopers. I know some of the stuff is under investigation, I get that. But it’s a larger Native community that needs to be informed of what’s going on,” said Fairbanks Native Association Executive Director Chief Steve Ginnis.

“I don’t want people to think all of this is just a Native thing — no, it’s not. It’s a community problem, it’s a community issue,” Ginnis said, drawing cheers and drumming from those assembled.

“I would encourage the state troopers and the Fairbanks Police Department to be more transparent, share with the rest of us what’s going on here. Maybe by doing so, we may find a solution,” Ginnnis said.

Families of the missing repeatedly said that they are sure there are people out in the community with useful information who have yet to come forward and urged people with information to contact law enforcement.

“People who Doren called friends or people who’ve known our family for years know what happened to him and we just want to encourage them to come forward,” Jordan Sanford, whose cousin Doren Sanford went missing in downtown Fairbanks in August, told the News-Miner.

“We are all one community and from the city of Fairbanks and on behalf of the police department ... we are working those cases actively and strongly every day. And I know it can get frustrating because there’s work you see and there’s often times work you do not see and that’s where we have to communicate with the public,” Fairbanks Mayor Jim Matherly said. “If we come up against a brick wall, which does happen, we call on the community to help us. There’s more of you than there are of us and it’s our desire to work with you. So, we totally understand the concern.”

Jody Potts called for the creation of a Fairbanks missing persons task force. “We need this task force for agencies to share information, to connect the dots. There’s something going on here. It’s unusual to have eight missing persons just in five or six months,” Potts said.

“We respect our local law enforcement, we do. I don’t think it would be too much, given the circumstances and the fear that our community is in, to call in the FBI, who have additional resources, funding that might be available to work with troopers and Fairbanks police on this task force,” Potts said.

When attendees gathered in a circle to speak and pray, one spot was occupied by a poster board on an easel that had images and information for eight missing people.

• Jonathan Nakarak, 17, has been missing since May 23. (Troopers said Thursday that Nakarak was found “in good health and safe” Wednesday after a tip from the public.)

Anyone with information about any of the missing is asked to contact the Fairbanks Police Department or Alaska State Troopers.