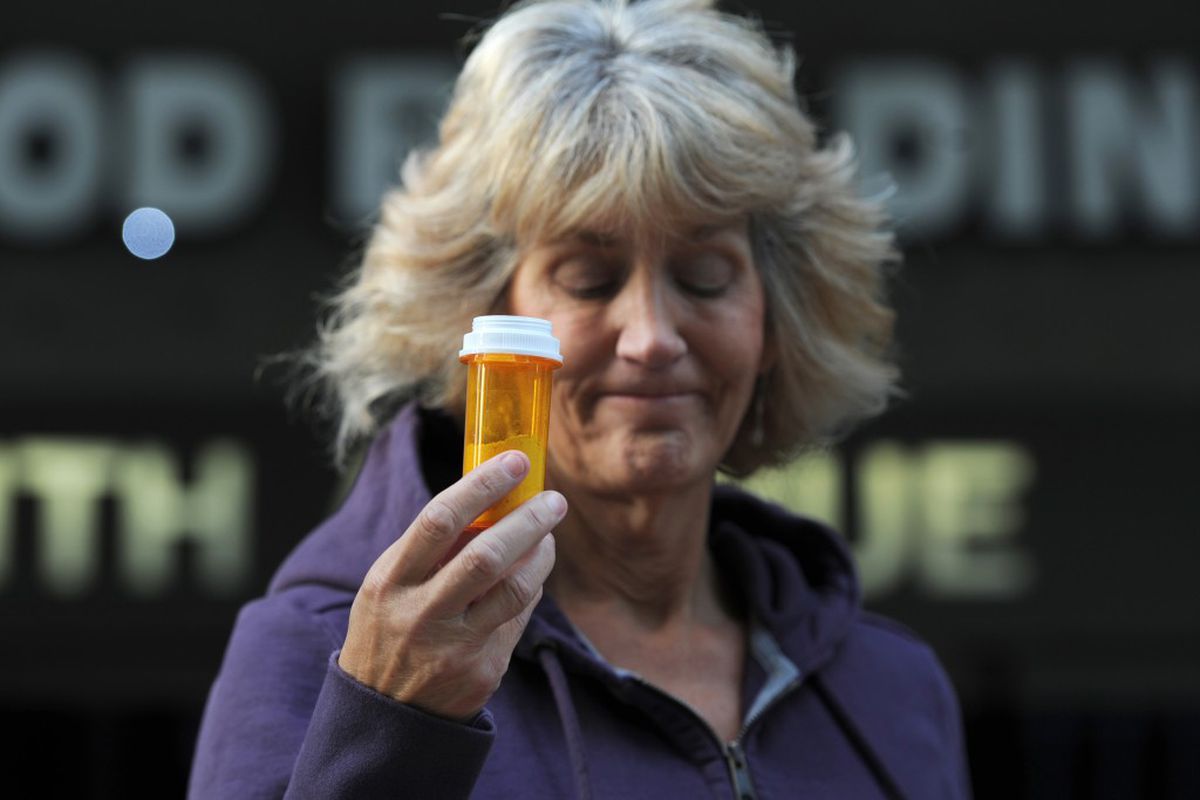 An Anchorage anesthesiologist appealing the suspension of his license over allegations by the state that he dangerously over-prescribed pain medication faced sharp criticism on Thursday, including from one mother who shook a pill bottle containing the ashes of her daughter as he walked by.

Courtney Jones was 22 when she died from an overdose of prescription painkillers in March 2015.

"Go back to Arkansas! One way, please! You are killing our kids," shouted the mother, Tracy Jones.

That death is not related to the doctor, Mahmood Ahmad, who on Thursday appeared before an administrative law judge with the state to fight the May 6 suspension of his license by the State Medical Board.

The state, in fact, has not presented any evidence that Ahmad injured patients who have visited United Pain Care, the practice he owns in a medical building on Lake Otis Parkway.

But the accusations against him — that he has prescribed excessive doses and volumes of opiates to patients, given vague diagnoses based on limited medical information, and appears in Anchorage just a few days a month because he lives in Arkansas — have stirred concerns in a state struggling with deaths from prescription painkillers and the heroin addictions they can lead to.

The key allegation against Ahmad – that his practice presents an "immediate danger" to the public – was enough to spark an early morning protest before the hearing got underway Thursday.

Jones and two other concerned parents with their own family ties to addiction and its problems waved neon-colored signs that said such things as "Stop legal drug dealers."

When Ahmad arrived for the hearing, he ducked quietly into the Atwood Building in downtown Anchorage as Jones approached. One of his lawyers, Anchorage attorney Carmen Clark, said he'd save comments for his testimony.

Once Thursday's hearing got underway, Jones sobbed in the small gallery as an expert witness for the state, Dr. Brett Stacey, the medical director of the University of Washington Center for Pain Relief, said the doses prescribed by Ahmad were several times too high.

He described the prescriptions he reviewed as potentially lethal.

"He prescribed medication known to kill thousands of people in our country without taking the proper safeguards," Stacey said.

Ahmad, in a suit and tie, sat quietly next to Clark for the hearing. At times he smiled, folding his hands or taking notes.

Clark and another attorney argued that no negative outcomes have been linked to Ahmad's practice.

Through cross-examination of the state's witnesses on Thursday, Ahmad's attorneys argued that the investigation into his work was not thorough and represented a snapshot of his caseload.

His attorneys noted that Ahmad was never formally interviewed, though not long after the investigation got underway in November he voluntarily sat down with an investigator for the state Division of Corporations, Business and Professional Licensing. The investigator happened to be serving a subpoena for records, and Ahmad spoke with her for about 40 minutes.

Two pharmacists also appeared as witnesses for the state on Thursday.

Justin Ruffridge, the pharmacist in charge of the Soldotna Professional Pharmacy on the Kenai Peninsula, said he learned about Ahmad when two patients came into the pharmacy in February, seeking to have prescriptions filled that called for high doses of oxycodone and methadone.

The prescribed doses were especially high for the patients, one of whom had no medical record of taking opiates and was therefore not accustomed to using them, increasing the risk of an overdose and even death, he said.

The patients, including two others who came later under similar circumstances, raised several "red flags," including that they were relatively young and appeared too healthy for such a treatment, Ruffridge said. The patients said they lived in the area but a web search revealed out-of-town addresses.

Ruffridge said he refused to fill any of those prescriptions. After the first visits, his staff soon decided they would never honor Ahmad's prescriptions.

Nichell Dawn Moore, a pharmacist at the Costco store on Dimond Boulevard in Anchorage, said Ahmad "poses a safety hazard to the public."

She said she became aware of Ahmad's practice last fall, when she started seeing prescriptions from him for high doses and high quantities of controlled substances.

They were usually for vague diagnoses, such as "chronic pain," rather than pain related to a specific part of the body or a particular problem. They were to be paid for in cash, unlike customers paying with insurance, a circumstance that limits access to a patient's prescription record.

The optimal starting point for an "opiate-naïve" patient who is not used to taking the controlled substance would normally be a prescription of about 5 milligrams, she said. But the prescriptions called for 15 milligrams or 30 milligrams.

The patients would often arrive one right after another.

She contacted her higher-ups at Costco. The corporate offices tried contacting Ahmad but didn't get the information they wanted, she said. In December, Costco sent him a letter saying they wouldn't fill his prescriptions.

Moore said she got a return call from Ahmad once but most of the time, he wasn't available.

"Trying to get a hold of the provider proved difficult. Every time we called there was no one at the office. When we got a call back, it was from a long distance number or a 1-800 number," she said.

Susan Winton, an investigator for the state who retired in May but appeared on the witness stand Thursday, said that she contacted several pharmacies and received records on 38 patients over roughly a five-month period.

She said Ahmad did not have access to the Alaska Prescription Drug Monitoring database, because Ahmad wasn't registered to access it.

"If Ahmad had checked the prescription monitoring program database, he would have learned some of his patients were already receiving controlled substances from other providers," she said.

The defense argued that those 38 patients did not represent the "totality" of Ahmad's work in Alaska.

Clark asked Winton if she's ever found evidence that Ahmad had harmed a patient.

"I did not personally learn that," she said, and added, "I think that  may come from another witness."

The hearing is scheduled to continue at 9 a.m. Friday on the 19th floor of the Atwood Building. Ahmad is the second witness expected to testify after a second state investigator appears on the stand.