Lives lost to overdoses remembered at gathering in downtown Anchorage 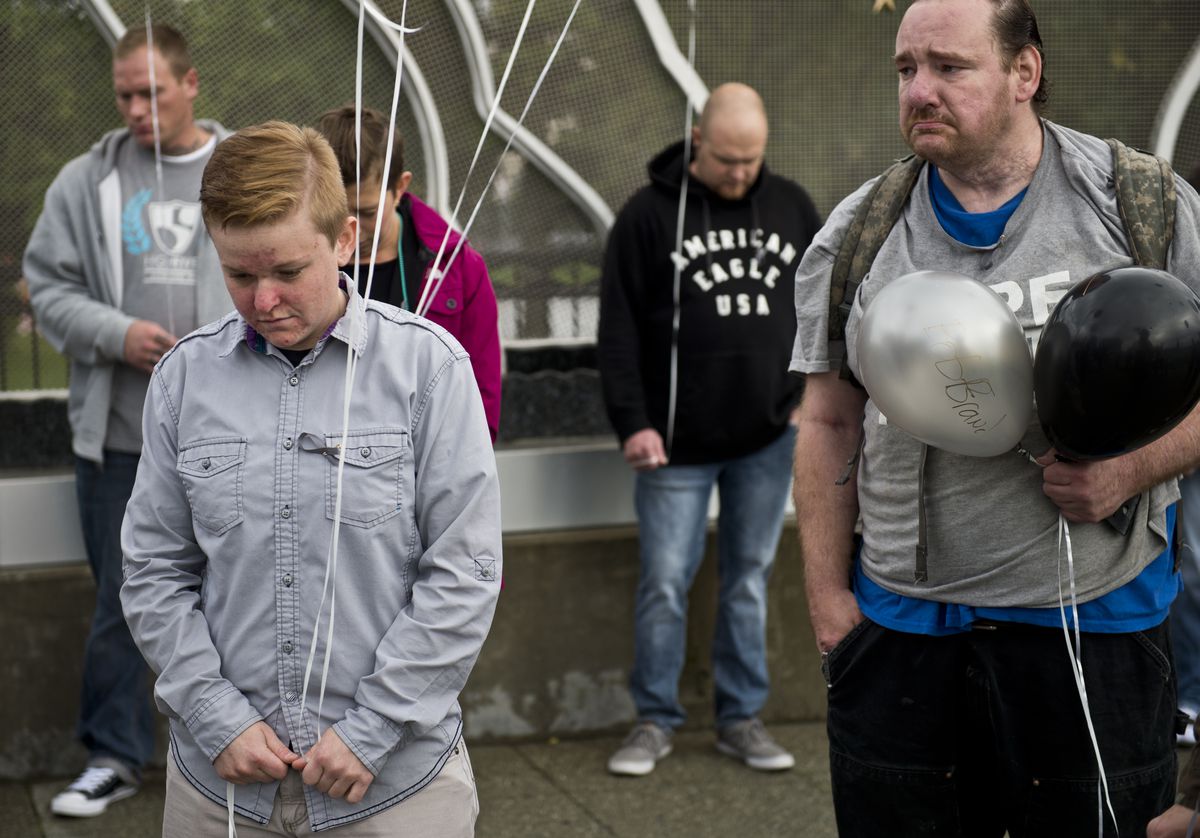 About 35 people released balloons on the Delaney Park Strip on Thursday after a moment of silence in memory of people who have died of drug overdoses. (Marc Lester / Alaska Dispatch News)

About 35 people released balloons on the Delaney Park Strip on Thursday after a moment of silence in memory of people who have died of drug overdoses. (Marc Lester / Alaska Dispatch News)

During rush hour Thursday, about 35 people gathered on the Delaney Park Strip in Anchorage, pausing for a few moments to remember the people they love who have died from drug overdoses. They also hoped to show support for friends who struggle with addiction.

"This is just to remember them and let them know that their actions don't define who they are," said Sasha Tsurnos, who helped organize the event, which included a balloon release.

Participants were given black and gray balloons on which they could write the names of whoever was on their mind. They could even write their own name, she said. The gathering could be an opportunity to feel love or a chance to grieve.

"If you want to be sad, then be sad. But let's let these balloons go so that they can be remembered and know that their names aren't lost," Tsurnos said.

[Earlier this year: Anchorage is seeing a dramatic surge in heroin overdoses]

Jessie Klingenberg felt joy. His struggle with addiction began at age 15. He's 38 now. For years, he did drugs that could kill him and did them in dangerous ways, he said.

"I could've easily died any day," he said.

Now in a treatment program, Klingenberg has been clean for nine months. In that time, it's been a steady climb from what he said was his lowest low.

That was Christmas Eve, when he was released from jail after a three-year term. But he had burned many bridges over the years. Even his parents were afraid of him.

"I got out and there was no one there for me," he said.

Klingenberg crossed a street and looked around at the homeless services near the Anchorage jail, he said. It was then that he turned a corner. Something had to change.

"I really made a conscious decision. Is this what I want for the rest of my life? Because this is what it's going to be. If I continue down the road that I'm going, this is going to be it right here," he said.

Klingenberg said drug use is rampant in Anchorage right now. He's happy to be putting the pieces back together and reconnecting with his kids.

"It's good to be clean and sober, and it's nice to be congregated around by people who are very supportive and very helpful," he said.

Tsurnos, who works with Cook Inlet Tribal Council's Recovery Services, has been clean since 2007, but she remembers what it was like to be treated without dignity.

"It was never like, 'Oh, there goes Sasha.' It's like, 'No, there goes that meth addict. There goes that criminal,' " she said. She hopes events like this can change how people struggling with active addiction are seen by others. They have names and families too.

Ambra Mavis, who sat on a park bench on the periphery of the event, said it's worse than that. She said people with addiction face overt hatred. People speak of them as though they wish they were dead, she said.

"I think a lot of people who haven't been affected by it personally can't see beyond the addiction and the crimes, and they can't see the person (they were) before the illness," she said.

"When I hear that, for me they're talking about my sister."

It will soon be the first anniversary of the day her sister died after a drug overdose, she said. Looking around her Thursday evening at one of the many Overdose Awareness Day events happening around the world, she knew she wasn't alone in what she was going through.

Before she joined the group, she wrote in ink on a balloon — "To my sister Chelsea in heaven, I love you" — and shared memories of a woman who was more than her drug addiction.

"She was a daughter. She was someone's child. She was a wonderful sister. She's a mother. She was 26 years old. She was giving and loving and caring to a fault. She couldn't say no to people, and a lot of times that's what got her in trouble, trying to help her friends who had similar problems," Mavis said.

"And she was a human being who needed help, and didn't get it in time."

After a moment of silence, the balloons drifted south over the city.