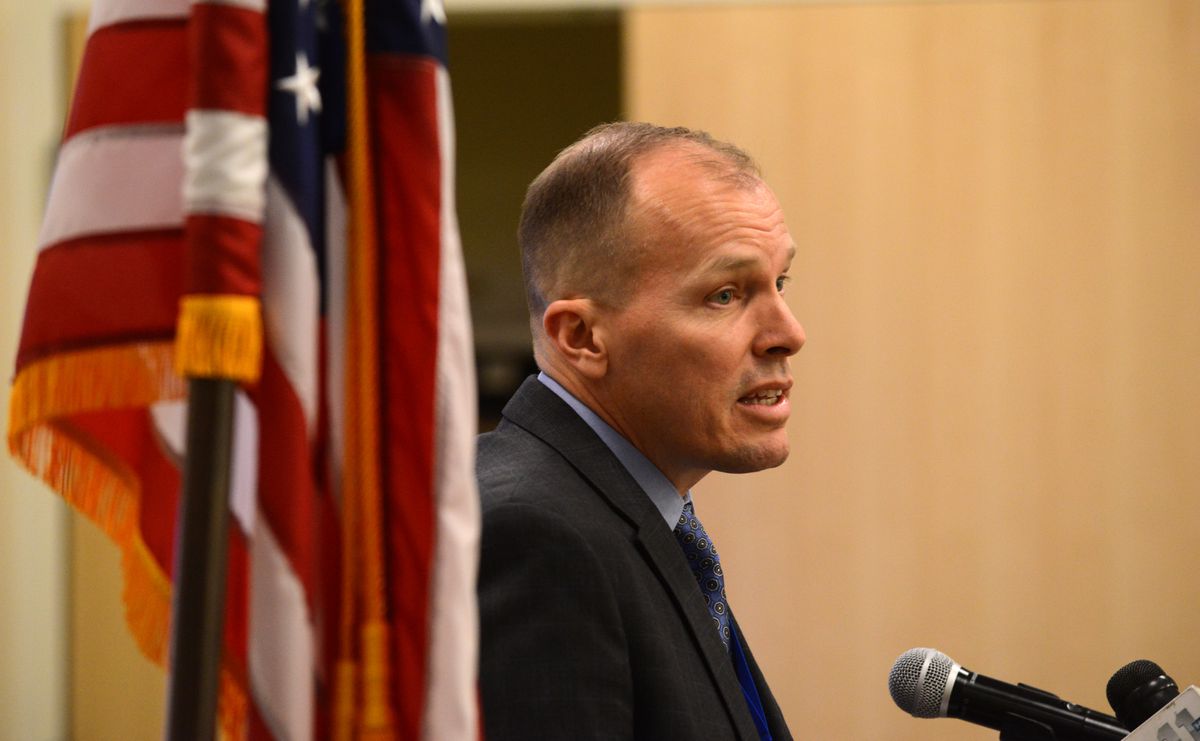 Dr. Timothy Ballard, director of the Alaska VA Healthcare System, speaks about the state of the VA at a press conference in Anchorage on Wednesday. (Bob Hallinen / Alaska Dispatch News)

Dr. Timothy Ballard, director of the Alaska VA Healthcare System, speaks about the state of the VA at a press conference in Anchorage on Wednesday. (Bob Hallinen / Alaska Dispatch News)

The director of the Alaska Veterans Affairs Healthcare System announced Wednesday that he plans to add nearly 100 new staffers to his team by July, bringing the total number of VA employees in the state to 650.

Dr. Timothy Ballard, the Alaska VA director, said the increase in employees will expand health care access for Alaska veterans, including in Anchorage, where VA doctors have stopped accepting new patients due to staffing constraints.

"Right now our system is at capacity in regard to enrollment," he said during the press conference Wednesday.

Ballard said he also hopes the increase in employees will boost morale within the VA system. While the number of required programs has grown over the years, he said, the staff size has not.

"Our staff are doing essentially superhuman efforts to meet all of the requirements and it's about time that we grew," he said.

For the past seven years, the Alaska VA has employed about 555 people, he said.

Ballard said the Alaska VA will "repurpose" about $6 million in its current budget to pay for the added staff. He said the VA plans to better utilize the medical services at Joint Base Elmendorf-Richardson to save money and it expects to collect more money from private health insurance companies this year.

In the past few months, the VA also hired new health care providers at its clinics in Fairbanks, Juneau, Kenai and the Matanuska-Susitna Borough, said Dr. Cynthia Joe, Alaska VA chief of staff.

The Mat-Su outpatient clinic in Wasilla has not had a permanent doctor since May 2014. According to a 2015 report, that doctor resigned, "citing an excessive workload."

The new Mat-Su doctor, Daniel Bang, started seeing patients this week, according to the VA. Ballard said the VA plans to hire a second permanent doctor at the clinic in March.

"The light at the end of the tunnel is getting larger and larger every day with the degree of resources we've put together to take care of veterans," he said.

In Anchorage, with VA doctors at capacity, the agency is referring new patients to community health care providers, Joe said. The government still pays the bill.

Ballard said he didn't know exactly when the Anchorage VA doctors would start accepting new patients again. It depends on how quickly the VA fills positions, he said. By Wednesday, there were three provider hires "pending," he said.

In the next several months, he said, Alaska veterans can expect to see expanded VA services, particularly in primary care and mental health services.

"For me, it's the right time for us to be growing," he said. "Particularly when Alaska is considered a destination state for many veterans. Our veteran population has been growing over time, so we think we need to be able to accommodate that."