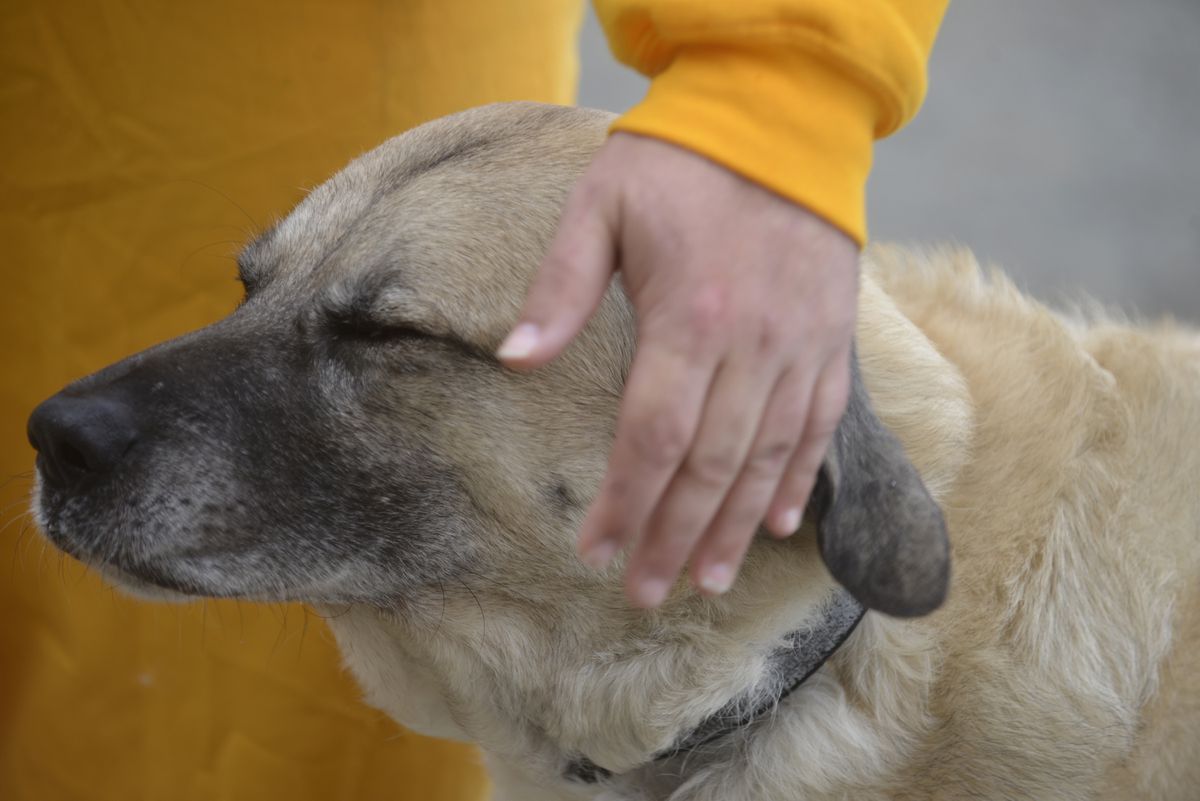 In this June 28, 2018 photo, Taz, a 9-year-old half-Great Pyrenees, half-bull mastiff, gets some love from inmate Ernest Rogers at the Wildwood Correctional Complex in Kenai, Alaska. Taz calls the prison home after being adopted as part of the SPOT (Shelter Pet Obedience Training). (Erin Thompson/Peninsula Clarion via AP)

In this June 28, 2018 photo, Taz, a 9-year-old half-Great Pyrenees, half-bull mastiff, gets some love from inmate Ernest Rogers at the Wildwood Correctional Complex in Kenai, Alaska. Taz calls the prison home after being adopted as part of the SPOT (Shelter Pet Obedience Training). (Erin Thompson/Peninsula Clarion via AP)

KENAI — They may be in prison, but some of Wildwood Correctional Complex inmates aren't exactly doing hard time. For the approximately 85 dogs that have been taken in through the facility's dog rehabilitation program, prison means a warm place to sleep, lots of treats and a really big yard.

Since 2013, inmates have taken in dogs and cared for them through the prison's Shelter Pet Obedience Training. The program was the initiative of Superintendent Shannon McCloud, who had heard about successful programs in other prisons and thought they might give the Wildwood inmates a productive activity.

"I just happened to notice people just kind of milling around not doing anything and that always spells trouble in a prison — when we don't have things for people to do," McCloud said.

While the program was slow to start up — McCloud initially got the OK to take in only one dog — it took off in earnest once McCloud took on the role of superintendent in 2016.

"We went from one to six overnight," McCloud said.

McCloud said she was initially concerned some inmates might not warm up to having dogs in their midst, but for the most part, inmates have welcomed the furry friends.

"But the atmosphere is so much different for staff and inmates. If you're having a bad day, you can go pet the dog, feel better," she said.

About 15 prisoners are involved in training at the facility, and the number of animals trained at a time tops out at about 10, McCloud said.

For Alan Newby — one of the prison's current dog handlers — having a dog to take care of keeps him busy and focused on his immediate responsibilities.

"With the dogs you don't wake up thinking, 'What am I going to do today?'" Newby said. "It's, 'Well I have a schedule. The dogs has the needs.'"

Newby's latest charge is Hailey, an energetic boxer mix for which he's been caring since April. A repeat resident of the prison — she was adopted out as a puppy but returned by its owners — Hailey often overwhelms other dogs and has to be kept on her own. Every day Newby brings her to his shift at the greenhouse, where the two play hide and seek among the tall leaves of the tomato plants.

"I try to play games with her where I got her to think," he said. "It's just about getting her to think about it. It just stimulates her brain, keeps her active. And she's actually calmed down quite a bit since she's gotten here."

Newby first began working with dogs at an Arizona prison in 2003, when he and fellow inmate Jonathan Norton participated in a service-dog training program. Having service dogs helped give him perspective on his own life, he said.

"It was kinda the reality point, where you see you think you have it so bad, but that person is wheelchair-bound, they can't get out, can't get down and pick something up," Newby said. "And so they are reliant on that dog. They are reliant on you, to make sure that dog does everything that they need, and doesn't hurt them or somebody out in public."

"So we decided to just do the best we could and save as many dogs as we could," McCloud said.

Norton said he believes the presence of the dogs has helped create a more positive environment in the prison.

"Even though I feel averse to talking to some people — for whatever reason — I try to be polite and stop myself. And if the dog wants, let them interact with the dog, and then ask whatever questions they have."

Through the years Norton has taken care of more dogs than he can count — although a few do stand out. One dog, he remembers, came into the program as a boy. It was, in fact, very much a girl, and heavily pregnant. The dog gave birth to a litter of eight on Norton's pillow.

"That was an experience," Norton said.

Dog care is an around-the-clock responsibility, and Norton has to split his time between prison work — which begins at 4 a.m. in the kitchen for him — and taking care of his dogs.

Norton's current charge is a fluffy black Pomeranian, whom he has dubbed "Vicious Pretty" — at least until he's given a permanent name — for his predilection for biting.

"I was told if he bites one more person on the street, they're going to put him down," he said. "So the mission was to try to save this dog and I realized that almost immediately that his bites are fear-based."

Small enough to fit in the crook of Norton's arm and decked out in a silky tie, Vicious Pretty still has a hard time with the noise and people of the prison environment, but has grown attached.

"It's taken him about a week for him to come out of his shell, at least with me, and, not cower and not bite me, and not have what we call freakouts, and spaz out real quick," he said. "Now he gets affection in the middle of the night, so I'm not sure if it's affection, or if he has to use the bathroom," Norton said.

Norton said he initially turned down the opportunity to work with dogs.

"The only experience I had with a dog was getting chased," Norton said.

He had second thoughts, however, and signed on to the program.

"I got to thinking, I'm a longtimer, and at the time, I was like, I need to take opportunities when they pop up, because I might never have a chance to do it again," he said.

The prison not only adopts out dogs, but has taken in a permanent resident. Taz, a 9-year-old half-Great Pyrenees, half-bull mastiff, is the constant companion of inmate Ernest Rogers. The elderly dog arrived at the prison about 16 months ago underfed and with medical problems. Rogers took him on as a full-time caregiver. Now bulked up by the treats he receives from staff and inmates alike, Taz sleeps on Rogers' bed and is his constant companion.

"He's taught me a lot, responsibility," Rogers said. "Nobody's ever depended on me. He depends on me every day. So it keeps me out of trouble and I know he depends on me. I can't leave him."

Taking care of animals can be expensive. McCloud estimates it costs about $600 to $700 a month to pay for veterinary upkeep for all the dogs — depending on the number of dogs and their conditions when they arrive. Prisoners pay for the cost of caring for the dogs themselves through the Prisoner Welfare Fund and fundraisers.

Huhndorf covers the costs of vaccinations, and offers services at a discounted rate for costlier procedures. Since launching her clinic in 2016, she's seen between 30 and 40 dogs.

"I think that's an excellent thing for inmates to do. I think it's a win-win situation," Huhndorf said. "When I heard they were doing it, I just wanted to help them."

Dogs who come in without behavioral problems might be adopted out after six to eight weeks. Others stay longer, depending on their needs. Adoptees are advertised on the program's Facebook page and the Department of Corrections, where potential owners can check out pictures of current prison adoptees.

Norton has seen a lot of dogs come and go, and despite growing attached to some of them, he's happy to see them go to good homes.

"You care for them so long. Man, they're part of your life. But seeing who they were going to, and the joy that these people were getting out of these dogs, it was overwhelming," he said. "It suppressed any sort of anxiety or grief or anything I could have felt by having to give the dog up, because I'm helping somebody."