‘I made a change in my life’: Village police say they make a difference despite criminal records 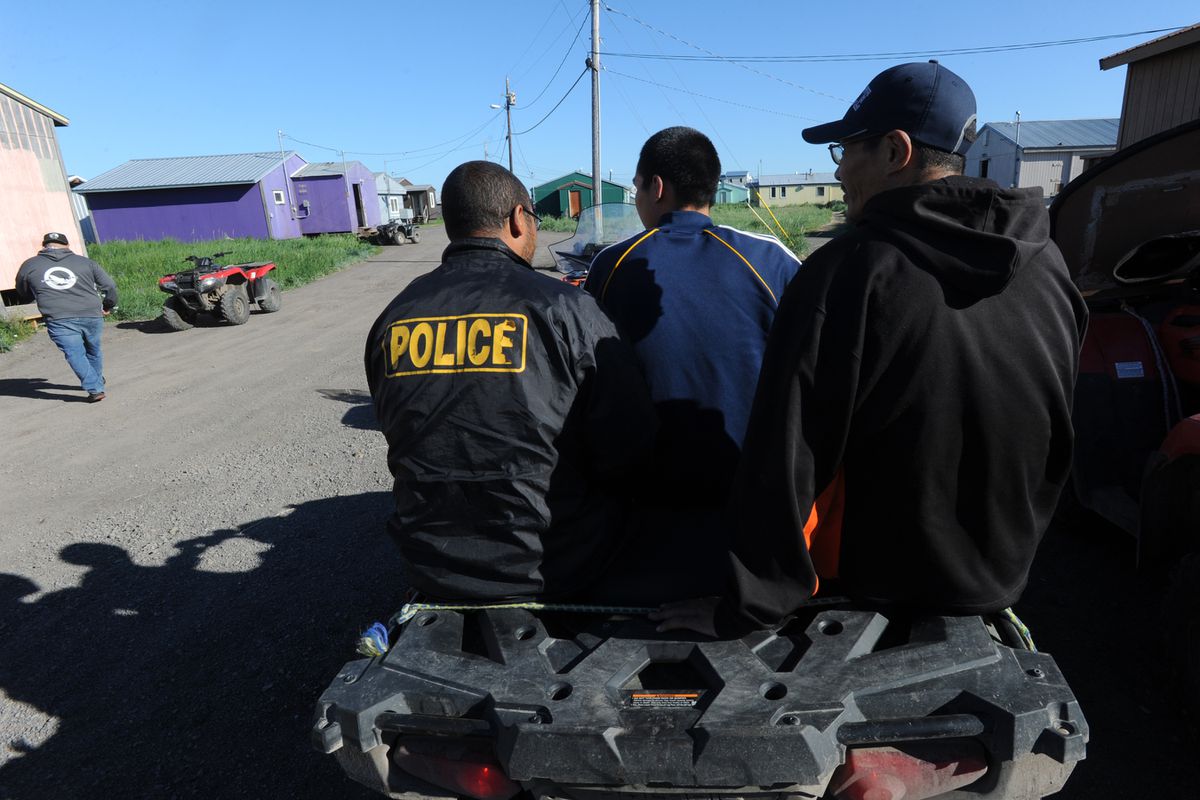 Village police officers leave on a four wheeler after giving public safety reports at a city council meeting in the Yup'ik village of Stebbins on the Norton Sound coast in Western Alaska on Thursday, June 27, 2019. (Bill Roth / ADN)

Village police officers leave on a four wheeler after giving public safety reports at a city council meeting in the Yup'ik village of Stebbins on the Norton Sound coast in Western Alaska on Thursday, June 27, 2019. (Bill Roth / ADN)

If there were better jobs to be had, city police officers in this Bering Strait village say they’d apply for them. But working as a village police officer is one of the few options available. Especially for those with fresh criminal records or felony rap sheets.

“I made a change in my life. I don’t use drugs. I don’t drink,” said Officer Delbert Acoman, 45, who has served a total of 292 days behind bars and amassed 18 criminal convictions including burglary and assault over the years.

ProPublica and the Anchorage Daily News reported Thursday that at least 14 Alaska villages, including Stebbins, have hired police with criminal records, a violation of state hiring requirements. In eight other communities, tribes have hired tribal police officers convicted of domestic violence or sex crimes. The findings are based on the first-ever database of Alaska VPOs and TPOs, created by contacting city governments and tribes in 57 villages.

In Stebbins, all seven officers working as of July 1 had pleaded guilty or no contest in more than 70 criminal cases, spanning decades. Together they have spent years in prisons and jails for charges ranging from low-level misdemeanors to sexual abuse of a minor. (The Alaska Police Standards Council says that domestic violence convictions, even misdemeanors, disqualify someone from working as a VPO.)

[Dozens of convicted criminals have been hired as cops in Alaska communities. Often, they are the only applicants. In Stebbins, every cop has a criminal record, including the chief.]

Stebbins officials say they have no choice but to hire officers with convictions because few people apply for the low-paying, part-time jobs. In interviews, several residents said the current police force does a good job of responding to their calls for help and they were grateful for their service.

Some of the officers said that while they understand the concern about hiring officers who have criminal records, they believe they have turned their lives around and deserve another chance.

“I’m not the same person I used to be. I went to jail and did my time,” said Officer Vincent Matthias.

Below is a list of officers and the charges for which each was convicted or that resulted in the officer pleading guilty or no contest. Charges are misdemeanors unless otherwise noted. The list does not include pending charges, charges that have been dismissed or those in which a jury found the officer not guilty. Also not included are cases of minors consuming alcohol, which are now considered lower-level violations under the law.

Officer’s response: In a brief conversation with a reporter, Mike acknowledged that he has a criminal record but drove off without answering additional questions. He also blocked a reporter on Facebook.

Officer’s response: Kirk said that working as a VPO is stressful and that he would find another job, if one were available in the village. He said it “could be a problem” for a VPO to have a domestic violence conviction but said he considers himself a good cop.

Officer’s response: Matthias said that nobody wants to work as a VPO, but he is doing so to feed his children. He said he was unaware of the state regulation that prohibits village governments from hiring people with certain criminal convictions as VPOs. He said attention should be paid to the good work he and his colleagues do, such as preventing people from committing suicide and stopping violent encounters from escalating.

If others believe they could do a better job keeping the community of Stebbins safe, they should do so, he said.

“Did you stop anybody from killing themselves? Have you went to an argument where there is a knife?” he asked.

Officer’s response: Aluska said he is related to half of the community, meaning he must constantly police his relatives. “It gets hard,” he said. “But we got to do our job. It keeps money on the table.”

Aluska said he helped recruit many of the current VPOs, people who would not be intoxicated on the job and would work hard for the community. “We are doing good,” he said.

When he was younger, Aluska said he had escaped from custody. But he said it has been quite awhile since his last arrest, and he has hardly any options for other jobs in Stebbins.

Officer’s response: Okitkun said he does not believe his conviction should prevent him from working as a VPO because it was not a felony charge. The work is difficult, he said, and the city hasn’t called him lately to go on patrol. “They found somebody else, I guess.”

Officer’s response: Acoman said he has worked on and off as a Stebbins police officer for years and is the only current officer who received formal law enforcement training. He’s lost count of the number of times he’s been called respond to a report of a suicide or suicide attempt.

“To help out the community is good for me and my family,” Acoman said.

Officer’s response: Nashoanak acknowledged making mistakes, but he said, “I’m trying to change my ways and better my life.”

The Anchorage Daily News and ProPublica are spending the year investigating sexual violence in urban and rural Alaska. Here’s how you can stay in touch with us: