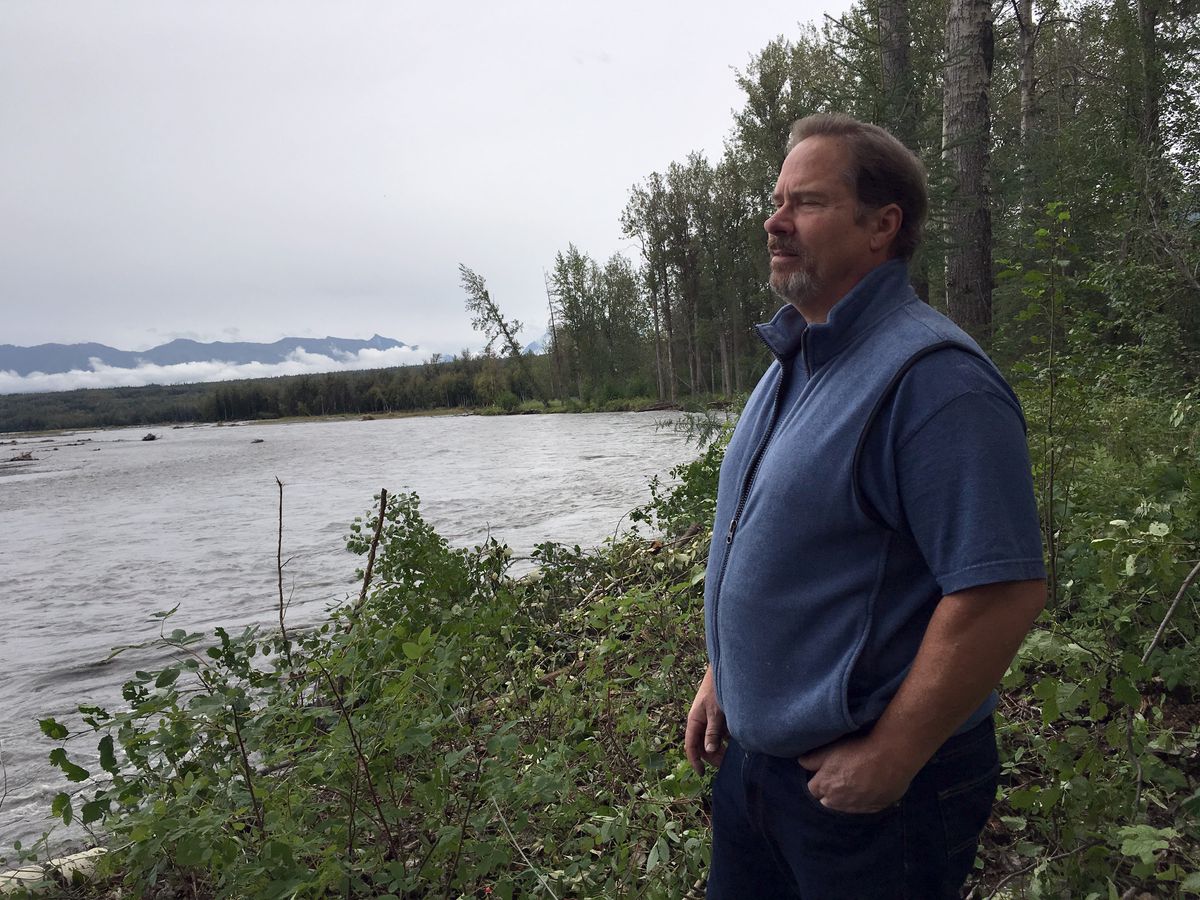 Scott Easler, a homeowner along the Matanuska River, stands on its banks Thursday amid growing concern erosion could send water coursing over nearby properties and the Old Glenn Highway. (Zaz Hollander / Alaska Dispatch News)

Scott Easler, a homeowner along the Matanuska River, stands on its banks Thursday amid growing concern erosion could send water coursing over nearby properties and the Old Glenn Highway. (Zaz Hollander / Alaska Dispatch News)

BUTTE — Scott Easler interrupted himself midsentence as a menacing "whump" rose from the slumping waterside.

That's the sound Easler heard Wednesday night before the main channel of the broad Matanuska River devoured another slab of rocky soil, a half-dozen trees — and ultimately 14 feet of land in a 12-hour period.

"It's the full brunt of the main channel," he said, standing a few miles of south of Palmer on Thursday, eyeing the frothy brown water roiling past.

The glacier-fed Matanuska has scoured a destructive path for decades as it weaves back and forth between Palmer and Butte. The river is responsible for dozens of lost structures and untold underwater acreage in Butte and Sutton.

But this time is different, wary river-watchers say.

The erosion — the river is subverting the bank, not flooding over it — is much more aggressive than usual, they say.

Neighbors in the area pounded a piece of rebar 50 feet from the river's edge in late July. The water was within 10 feet of that bar Thursday.

Local officials have taken the unusual step of warning residents and Gov. Bill Walker that the situation could quickly become an emergency.

Matanuska-Susitna Borough Assembly member Jim Sykes, who represents Butte, on Tuesday sent the governor an alert in advance of a possible emergency declaration.

"We have a growing problem on the lower Matanuska River that poses a serious threat to life and property from erosion and/or flooding," the letter begins.

A spokesman for Walker didn't immediately respond to a request for comment Thursday. Mat-Su officials said the governor's local staffer, Sarah Heath, was expected to visit the erosion site.

If the Matanuska consumes about 80 more feet of bank, it could pour into an old gravel pit that's now a pond and then slam into a gravel road perpendicular to the Old Glenn Highway, emergency officials say.

If that happens, residents and officials say, the resulting floodwaters could inundate scores of homes on the river side of the Old Glenn, but also damage phone, power and gas utilities — not to mention the road itself.

If the river then makes it into Bodenburg Creek, across the highway, twice as many properties could stand in the way, according to Casey Cook, the borough's emergency manager.

The same area suffered flood-related property damage in 2012 when the rain-swollen river threatened the Old Glenn before state transportation officials dug a trench to protect the road. About a dozen homes flooded or fell in the river.

This erosion threat could prove worse, Cook and Sykes said, because the force of the river's main current would be courseing through the pond, rather than the lower-velocity floodwaters of a few years ago.

About two-thirds of a flood dike installed in the 1980s washed out years ago, Sykes said in his letter to the governor. The remaining section is vulnerable to the main river's force, as is a long section of unprotected bank.

Local residents in 2013 rejected a proposal to create a new taxing district where property owners would pay for flood and erosion control. The new district could have paid for dike repairs.

Sykes suggested in his letter that the state transportation department could buy property to protect highway right-of-way and give the Alaska Department of Environmental Conservation the ability to buy properties to remove homes and contaminants "before they end up in the river."

Meanwhile, the borough is still waiting to hear back from the Federal Emergency Management Agency on buyouts for about 16 river properties in Butte.

Cook, Sykes and several elected officials attended a Butte Community Council Wednesday night and warned residents in the erosion area to be ready to move if necessary. The borough can alert people with cellphones in a given area, Sykes said. The Butte Fire Department would also go door-to-door, Cook said.

"We talked a little bit about being prepared," he said, of the presentation Wednesday night. "Having your go bags and your medicine and your dog food and all of that — being ready to go."