Not Mayberry: Palmer looks to neighborhood watches to combat crime 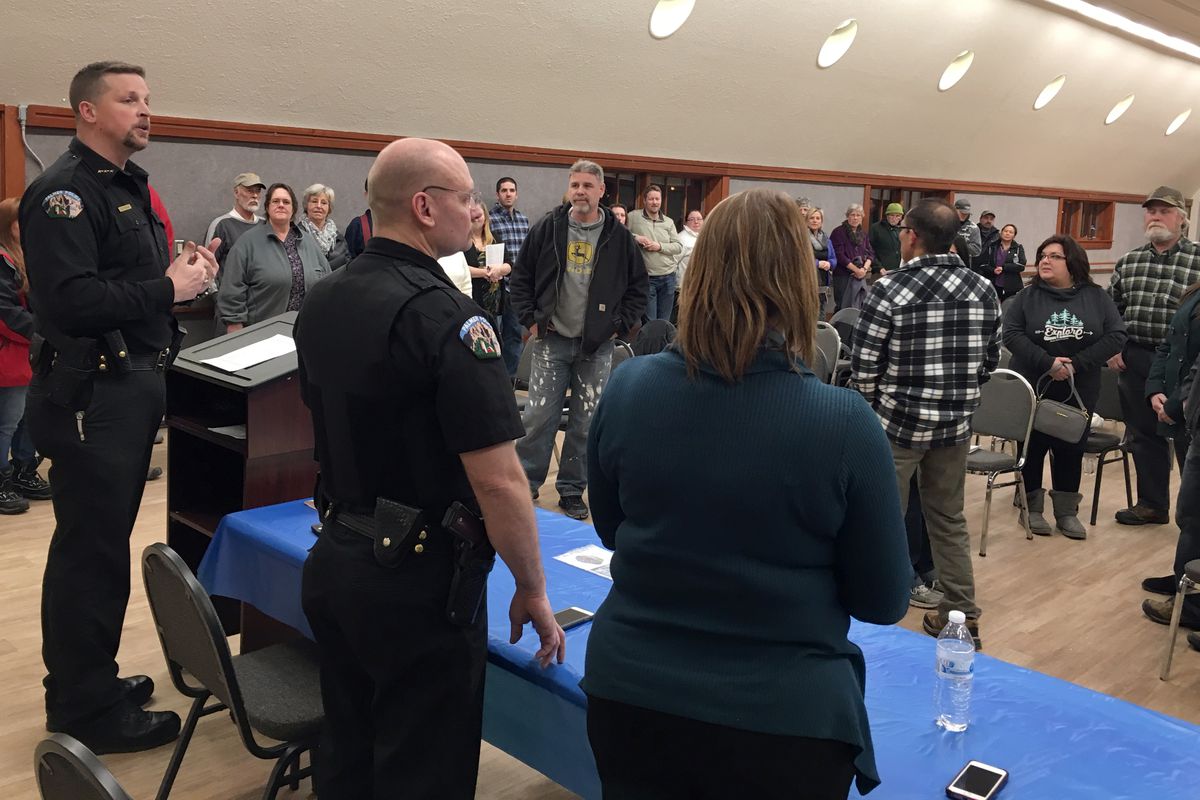 Palmer police chief Lance Ketterling addresses people interested in forming neighborhood watch programs during a meeting Thursday nigh at the Palmer Depot. Ketterling asked participants to stand in different areas of the room depending on where they lived. (Zaz Hollander / Alaska Dispatch News)

Palmer police chief Lance Ketterling addresses people interested in forming neighborhood watch programs during a meeting Thursday nigh at the Palmer Depot. Ketterling asked participants to stand in different areas of the room depending on where they lived. (Zaz Hollander / Alaska Dispatch News)

PALMER — Some Palmer residents frustrated with vandalism and theft are ready to make another try at neighborhood watches.

Upwards of 100 people turned out Thursday night for a Palmer Police Department meeting on forming neighborhood watch programs. Another meeting on the same topic nearly a decade ago drew just 20 people — and resulted in no active watch programs.

People in this sometimes sleepy city of about 7,000 still don't always deadbolt the house or lock the car when they just run into the store for a few things.

But they really should, police say.

"We have a great town. It is not, nor has it ever been, Mayberry," Police Chief Lance Ketterling told the group, a reference to the fictitious setting of "The Andy Griffith Show." "There is stuff that we all should be watching out for."

The city convened the meeting in response to the proliferation of crime discussions on social media, the November murder of a local teenager, and concerns voiced by the public about criminal justice reforms that went into effect last year with the passage of Senate Bill 91.

Data shows there isn't a sudden spike in crime, authorities around the Valley say.

Police statistics show Palmer's crime rates have held fairly steady the past five years. But there is crime: an annual average of a little over 100 assaults; more than a dozen sex crimes; and at least 200 property crimes, spiking at more than 400 when a serial burglar hit downtown businesses a few years ago.

Many here are also still coming to terms with the killing of 16-year-old David Grunwald, who investigators say died after a group of other teenagers beat, then shot him and tried to cover up the homicide. Court documents indicate the beating began at a Palmer home.

"It's so scary, this David Grunwald case," said Lisa Rodgers, who lives in the Cedar Hills subdivision at the edge of the city, the only place in Palmer with even a semiactive watch program. "Unfortunately it took something so tragic to open the eyes of people to say … this is really happening in our neighborhood."

Ketterling called watch programs a way for the community and police to work together.

"The fact we have this many folks in the room tonight gives me an indication of how serious people are starting to take these trends," he said.

Attendees got a crash course in Neighborhood Watch 101: keep it small — subdivision- or even block-level; really get to know your neighbors and their patterns; and keep an eye on suspicious activity. No vigilantes or pursuits.

Dispatch supervisor Rebecca Frey walked the group through how to call 911 with information about suspicious activity: Be detailed; know there may be a pause on the other end as dispatchers relay real-time information to officers; only call the emergency number to report activity happening at the moment.

Citizen reports led to various arrests recently, including a gentleman in a car at a park with what looked like a gun — felon in possession of a firearm, drugs, burglary — and a house with traffic coming and going for three days where the occupants were arrested on drug charges, Frey said.

"If it doesn't look right to you, it's probably not right," she said.

The ability of an organized group of neighbors to keep track of unusual activity is part of the appeal of a watch program, Rodgers said.

Cedar Hills started a neighborhood Facebook group about four years ago, after a fast-moving and unseasonably late November wildfire threatened the subdivision. Rodgers, with help from Christina Powell, started the group as a way to maintain the community closeness that developed after the fire.

The closed group has just under 150 members. People post invites to tea and knitting or offer mowing services. They also share advisories about everything from lost garbage containers to unfamiliar jacked-up pickups parked outside someone's home.

The Facebook group has made a difference in crime, Rodgers said.

A few years ago, neighbors found the kids egging and vandalizing one home in particular, she said. Instead of filing charges, the owner made them clean up the mess.

"She had them mowing, doing all these home outside projects," Rodgers said. "The word kinda gets out."

Residents also formed an official neighborhood watch a few years ago and posted signs at the subdivision entry. But that effort fizzled, Rodgers said, because "we didn't have the tools to facilitate a full-force one."

She heard from several neighbors at Thursday night's meeting, excited about resuming an official program. There are already any number of residents, some law enforcement or military, who keep any eye on activity and even do unofficial patrols.

"The neighborhood watch has its definite own personality," Rodgers said. "That just shows the force of us all coming together. Enter at your own risk."