‘It is too much,’ says uncle of 5 girls killed in Butte mobile home fire 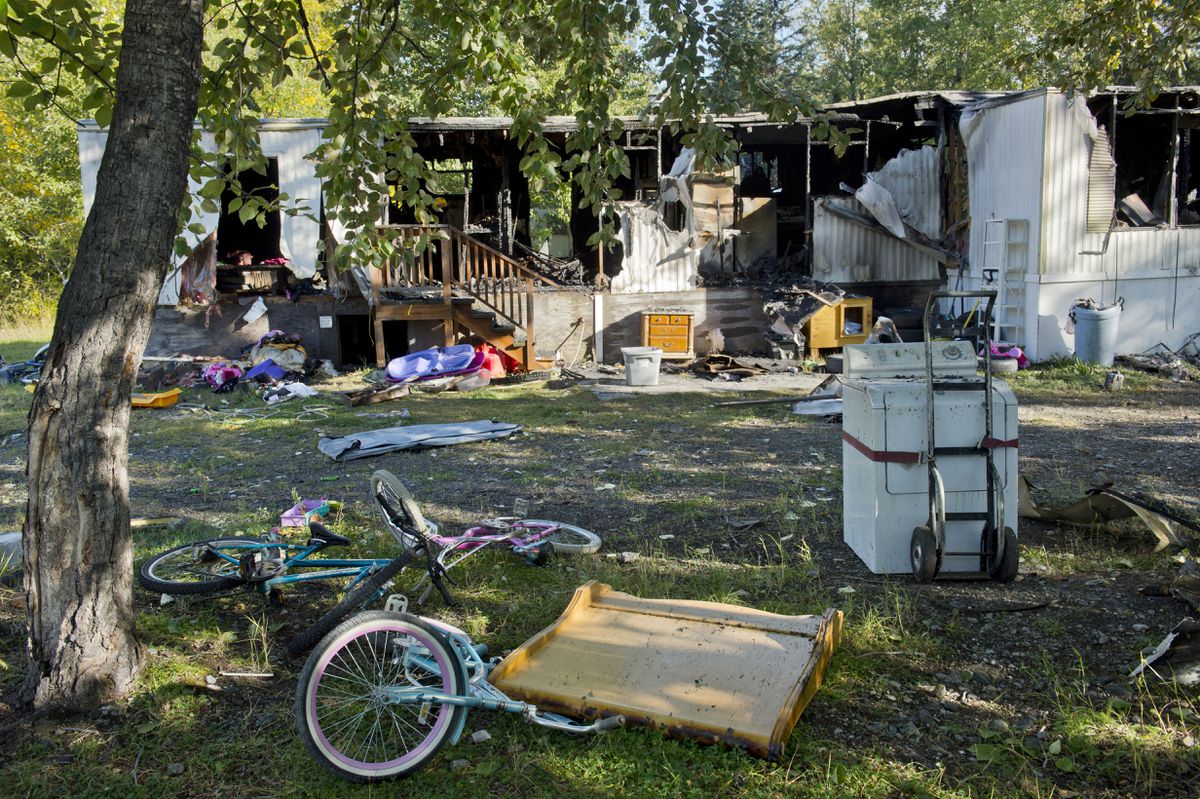 A trailer home on South Wickham Circle in Butte is in ruins on Friday, a day after it was destroyed by a fire. Five children died in the blaze. (Marc Lester / Alaska Dispatch News)

A trailer home on South Wickham Circle in Butte is in ruins on Friday, a day after it was destroyed by a fire. Five children died in the blaze. (Marc Lester / Alaska Dispatch News)

Early Thursday morning, Jimmy Flores, a father of five young girls, left the family's mobile home in Butte to start training for a new job as a school bus driver.

On the bus, he got an emergency call, said his brother, Armando Astorga. He needed to get home fast. The trailer was on fire.

All five girls were inside. Neighbors frantically tried to help. But the girls' parents and extended family would soon be crushed. The children perished in the blaze that consumed the home, according to Alaska State Troopers. The youngest was 3, the oldest, 12.

Astorga, who lives in Los Angeles, collected bits of the story in phone conversations with his brother, who is shattered by grief and despair and struggling to find a way through.

Smoke and flames were pouring from the trailer next door — the Flores home.

It was before 7 a.m. Wytaske shouted for Wheeler to call 911. He said he ran to the burning trailer. Flames were engulfing it. He grabbed a stick and started bashing smoke-filled windows to get the girls out. He couldn't see or hear the girls. He shouted at them to crawl or jump.

The state Fire Marshal's Office and Alaska State Troopers are investigating the fire. They haven't yet said how it started. Troopers also haven't publicly identified the girls. Astorga gave the names of his nieces as: Jaelynn Flores, 3, Sofia Flores, 6, Lilyanna Flores, 7, Nevaeh Flores, 8, and Alexis Quackenbush, 12.

Flores had worked on an oil rig in Alaska but was laid off in the current downturn, Astorga said. He had been in and out of jobs trying to support the family, his brother said. On Thursday he was in training for a new job as a school bus driver for a contractor in the Matanuska-Susitna Borough School District.

"Everything was looking good. It was finally turning around," Astorga said.

Jen Biddinger, a spokeswoman for First Student Inc., operator of the school bus program in the Mat-Su, confirmed that Flores had just joined its driver training program.

"When he got word (to get home), he was on the bus training with a driver and a group of passenger kids," Astorga said. "He was in the middle of nowhere helping."

Quackenbush, who was working as a hairdresser, woke up the girls to get ready for school. She left the 12-year-old in charge while she dropped off their grandmother. She told the girls she'd be home in five minutes.

Crews from the Butte Fire Department and Palmer Search and Rescue rushed to the trailer.

When the first firefighters arrived, neighbor Wytaske stepped back.

Then Quackenbush pulled up to see her home on fire. She started screaming.

"She collapsed right there," Wytaske said, pointing to a nearby spot on the ground between their trailers. "She knew. She knew it was over."

Everything happened so fast. Thursday was surreal, a blur of grim and awful images. Firefighters prayed in a circle. Relatives and friends came and went, sobbing. Authorities brought the small bodies out of the burned wreckage in special bags.

The conversations have been hard. Astorga said his brother was so distraught it was like he was speaking in tongues. A neighbor saw him at the burned home early Friday morning, sobbing.

At the trailer later on Friday, water dripped from charred interior beams. Few exterior walls remained. A few pink bikes lay on the ground near what had been the front door.

The parents lost their belongings too. Fundraising to help with the funeral and other expenses is underway.

The girls often ran around their mobile home park in a pack with a half-dozen other children, Wytaske said, his voice still hoarse from his desperate shouts the day before.

"They all had just little different personalities," he said, tearing up. "They were all just little beauties."

State child welfare officials say there is no specific age at which a child is old enough to care for younger ones. A 12-year-old might well be able to do so, depending on the needs of the younger children and the length of time, said Travis Erickson with the state Office of Children's Services. Neighbors said Alexis was mature for her age.

Another neighbor, Jordan Munroe, sent her 8- and 9-year-old children to school at Butte Elementary on Thursday to keep them occupied and distracted — and to give them access to counselors. Her children played with the girls all the time, including over Labor Day weekend.

Butte Elementary principal Dan Kitchin sent home a letter with information about school support networks and how to talk to children about death.

"As you discuss this sad news with your child, please let them discuss their thoughts and feelings," Kitchin wrote. "They will be comforted by talking calmly and honestly about their classmate or friend who died. There are many things we don't know and it's okay to say so."

The neighbors said that Flores and Quackenbush complained often about various problems at their trailer, including electrical issues and a potential gas leak.

Wheeler, Wytaske and Munroe described similar problems with wiring as well as holes in the floors. The former owner, identified through property and court records as Jackie Hughes, was slow to respond, they said.

A message for Hughes left with his attorney was not returned.

Elder's property manager visited tenants on Thursday afternoon and assured them the problems would get fixed, Munroe and Wheeler said.

'There's no going back'

The Flores family landed in Alaska a few years ago because they wanted a safe place to raise their children, Astorga said. They moved from San Bernardino, California, to Sacramento and then went farther north.

"We are a California family. My brother left California because of all the drugs and the crime and everything that was going on here," he said. "He left California to keep his family safe and now they are gone."

Relatives and friends from around the country have been calling, wanting to know what they can do and whether Flores and Quackenbush are OK.

Astorga, who at 36 is the oldest of five siblings, described himself as the person who keeps the family together. Now he is struggling too. He just wanted to hug his own 14-year-old son.

People are afraid to call his brother and don't know what to do.

They can only tell Flores they love him and will support him in these darkest times, Astorga said.

Flores is the only one of his extended family in Alaska. Astorga and some others are flying here to do what they can. They want to take the remains of the girls home to California — all five of them.

Lisa Demer reported from Anchorage and Zaz Hollander from the Mat-Su.