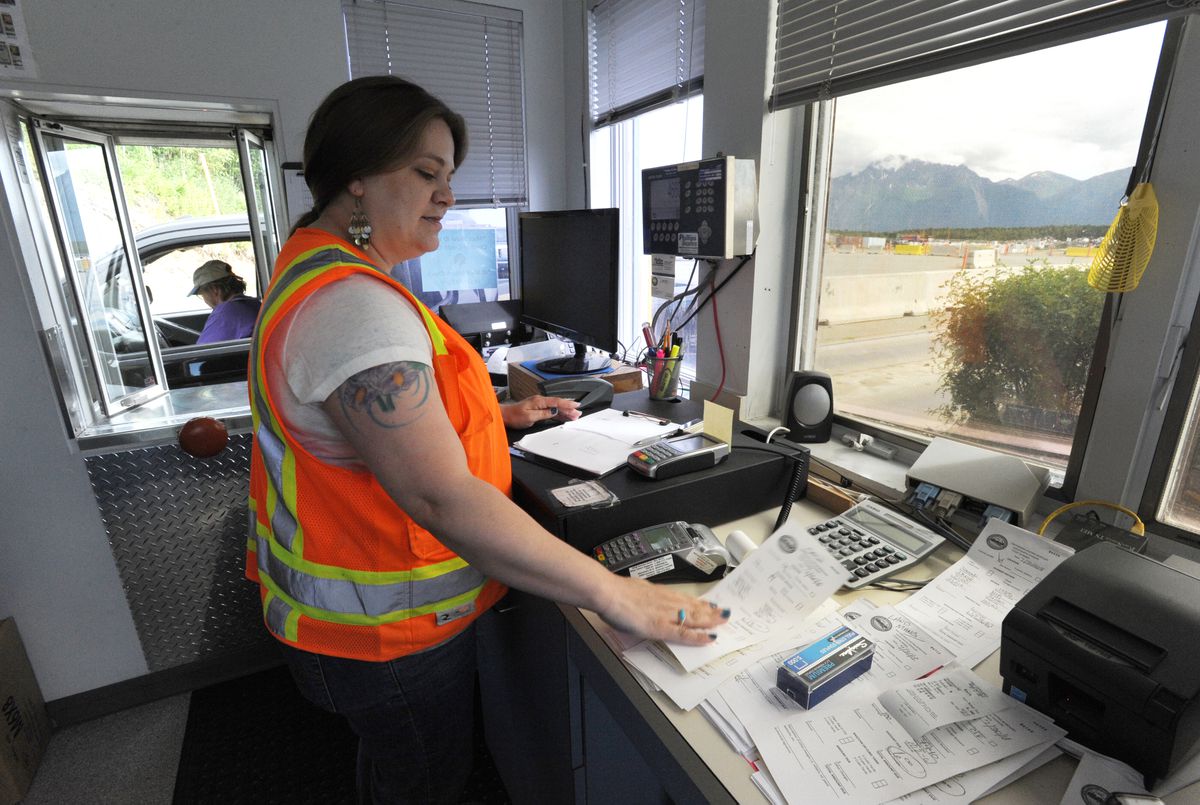 Melisa Bannon filled out receipts by hand in the Mat-Su Central Landfill scale house on July 30 as a result of the cyber attack on the computer system. (Bill Roth / ADN)

Melisa Bannon filled out receipts by hand in the Mat-Su Central Landfill scale house on July 30 as a result of the cyber attack on the computer system. (Bill Roth / ADN)

PALMER — When a cyberattack struck the Matanuska-Susitna Borough in late July, officials said it could take three weeks before computer systems got back to something resembling normal.

That was a little over three weeks ago.

Normal is still a ways away.

There is now no estimate as to when borough operations will be fully restored, according to an update issued Friday.

The borough so far has spent a little more than $1 million responding to the malware attack, which officials described as unprecedented and insidious.

While borough services are open to the public, services remain limited.

The animal shelter is handling adoptions as usual, but only if patrons can pay by cash or check, and overall functions are slower because of limited computer availability. The landfill now can take credit cards, but the nearby hazardous waste facility can't.

Sixteen of the 31 borough services listed on the update still offer only partial service, with limited access to data slowing work in finance, planning and capital projects, according to a tally released Friday. "Unable to do research," states a planning department summary.

Borough employee email varies with intermittent access to external and internal email, according to Erin Leaders, a borough spokeswoman.

At this point, borough information technology director Eric Wyatt said Friday, he expects it will cost roughly $1.4 million to restore systems and servers.

The borough's "cyber insurance" covers up to $1 million in costs.

The borough Assembly on Tuesday night extended a cyber emergency disaster declaration through mid-October. That allows the borough to pursue state or federal reimbursement, officials say.

The contract was put out for bids in June before the borough was aware of the malware attack, though officials now say it's possible the attack began in May.

The contract covers the cost of IT projects, including software and hardware installation and upgrades.

Asked if the contract indicated the borough had concerns about security before the attack, Wyatt said it was not specifically targeted in that way.

"But obviously things we would have been doing would have continued to increase our security posture as well," he said.

The borough has had to entirely rebuild its systems, according to an update posted last week. Teams of borough employees and outside IT specialists are "working overtime to bring systems back online in the most secure way possible" and restore operations.

The city of Valdez was hit by a similar attack at the same time as Mat-Su and is also still suffering from technology limitations.