A new campground will give a mistreated Knik River ‘beach’ a makeover. Can it be defended? 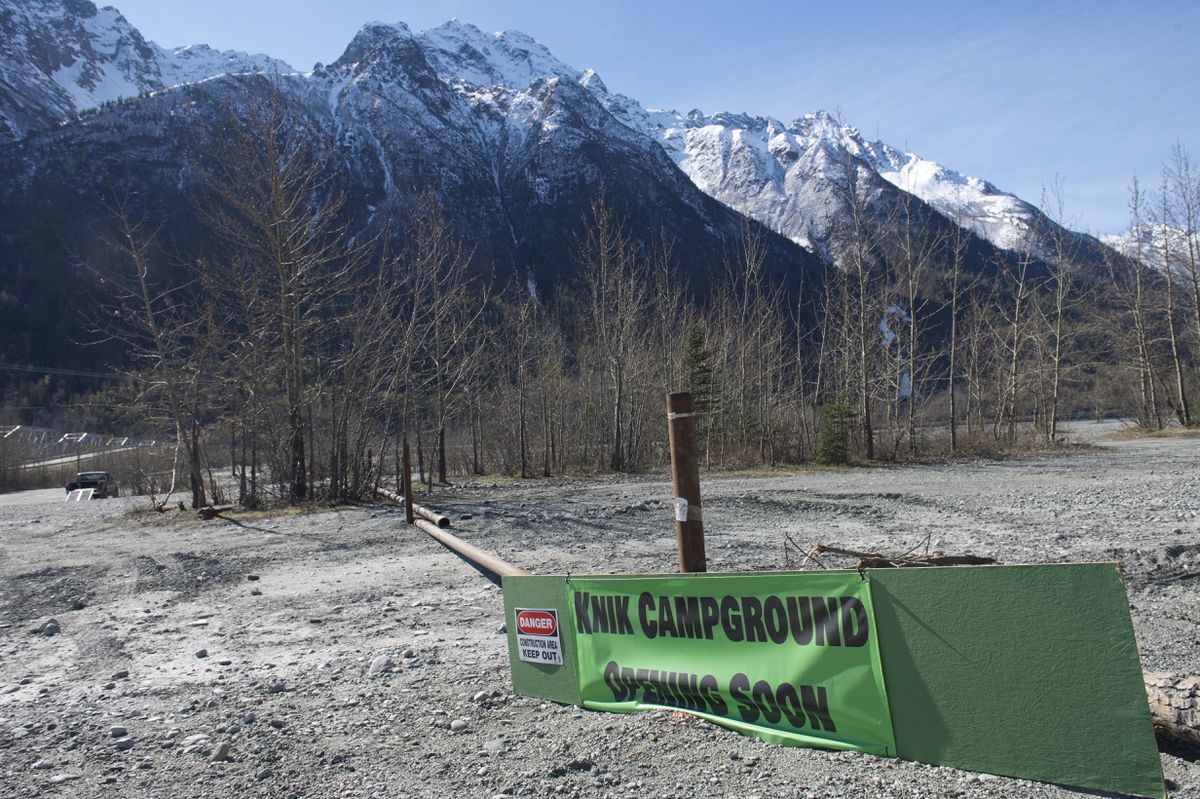 A private campground is being developed along the Knik River near the Old Glenn Highway. Jim Parker, who owns the campground land, said he hopes the development will help keep the area cleaner. (Marc Lester / ADN)

A private campground is being developed along the Knik River near the Old Glenn Highway. Jim Parker, who owns the campground land, said he hopes the development will help keep the area cleaner. (Marc Lester / ADN)

PALMER — Anywhere else, the valley carved by the Knik River in Butte could be a national park.

Tucked between ramparts of the Chugach Mountains, in the shadow of the 6,400-foot bulk of Pioneer Peak, the brawny, braided river gives way to stunning views of Knik Glacier.

But even though a state public-use area was created here in 2006, not all the gravel bars of the Knik River come with the rules and regulations of an official park.

Instead, the flat and lightly policed river beaches just 45 minutes from Anchorage tend to draw fun-loving locals and visitors as well as illegal activities and trash dumping.

Now, some wonder if the development of a private campground will chase some of the Knik’s less courteous users from at least one popular riverfront area — or just push them somewhere else.

The private campground is the brainchild of Jim Parker, a retired fighter jet pilot who moved to a 93-acre property next to the river about a year ago.

He said his decision to create a supervised camping area was made out of “purely selfish motivation” after he realized what a mess the place was: dead poached moose, human waste and literally tons of dumped appliances and other garbage.

“I take my dogs out every day. I’d always go out there riding my horses,” Parker said. “I kinda knew it was a little rough around the edges. But the amount of trash out there was just disgusting.”

He’s installing an RV-friendly campground with fire pits and hookups as well as trash and restroom facilities. The site — located west of the Old Glenn Highway on the north side of the Knik River — came with five fairly large cabins that he plans to move, plumb and wire.

A soft opening over the weekend featured discounted rates of $5 for day use and $10 for overnight. Purple Heart recipients and Vietnam veterans got in free.

Parker sank heavy-duty posts made from drill pipe to mark off the property. And there are rules: a 5 mph speed limit, an 11 p.m. quiet hour, and a campground ban for anyone caught spooking horses at the site or in the neighboring Knik River Public Use Area.

“I met people who’d say, ‘Yeah, it’s a beautiful location but you can’t go out there, you can’t take your kids.’ Like I said, I live out there. I run into human feces," he said. “It’s not going back to how it was, if that’s somebody’s goal."

There is still public access to the river beach: The land below the high-water mark is state-owned. Parker said he’s not going to mark his property line with barbed wire that blocks the view to the water. He just wants to keep the area “nice and pristine,” he said.

Parker bought the land, actually three parcels, and paid for a survey to check where his land ends and public state-owned land starts at the river’s high-water mark. The survey showed that gravel buildup below the highway bridge has added about 15 acres to the property, according to Ben Hagedorn, Southcentral permitting unit manager for the Alaska Department of Natural Resources.

The agency manages the 265,000-acre Knik River Public Use Area adjacent to the campground site. The public-use area manager monitors activities and works with the Alaska State Troopers to address safety and compliance issues, Hagedorn said. DNR gets $165,000 annually for enforcement in the area.

People who were using the upper part of the beach that’s now campground may just go across the Old Glenn to easily accessed state-owned gravel bars on that side, locals say.

The confined space between the mountains and the river limits public access on the south side of the river. But there are still some areas — especially a spot known as Manmade Lake — on that side of the Knik that people have long treated like public land.

The lake is public but the land next to it is not, says Candi Oaks, who owns 7 acres above the lake. Oaks said she’s contended with people shooting at 1 in the morning, broken glass from overnight campers breaking bottles, trash and human feces. Someone in a Jeep sped by and nearly ran over her 3-month-old German shepherd puppy.

Oaks said she paid a “considerable sum of money” for a survey to establish her property lines and distinguish them from state lands.

Since then, she said, she’s gotten grief for posting “No Trespassing” signs. Someone chain-sawed large logs placed as barriers and used them for firewood.

Manmade Lake is beautiful, Oaks said. But there are no public restrooms or trash bins and there is limited law enforcement. People squat there, shoot illegally despite signs prohibiting it, dump garbage, and burn pallets and hazardous materials.

“This is my dream home. My riverfront property is being used and destroyed by everyone else," she said. “We pay taxes on it. We should be able to put up ‘No Trespassing’ signs.”

The area south of the river for years has been the subject of illegal-shooting complaints, said Paul Houser, president of the South Knik River Community Council.

A state shooting range that’s part of the public-use area is closed through July for road work, which may push more people back onto the unrestricted gravel bars, Houser said.

“I don’t fault people for wanting to get out of Anchorage and look at the beauty of our valley and what we all like and moved out there (for) and enjoy," he said. "But at the same time, I hope they respect private property rights and things like that out there too.”