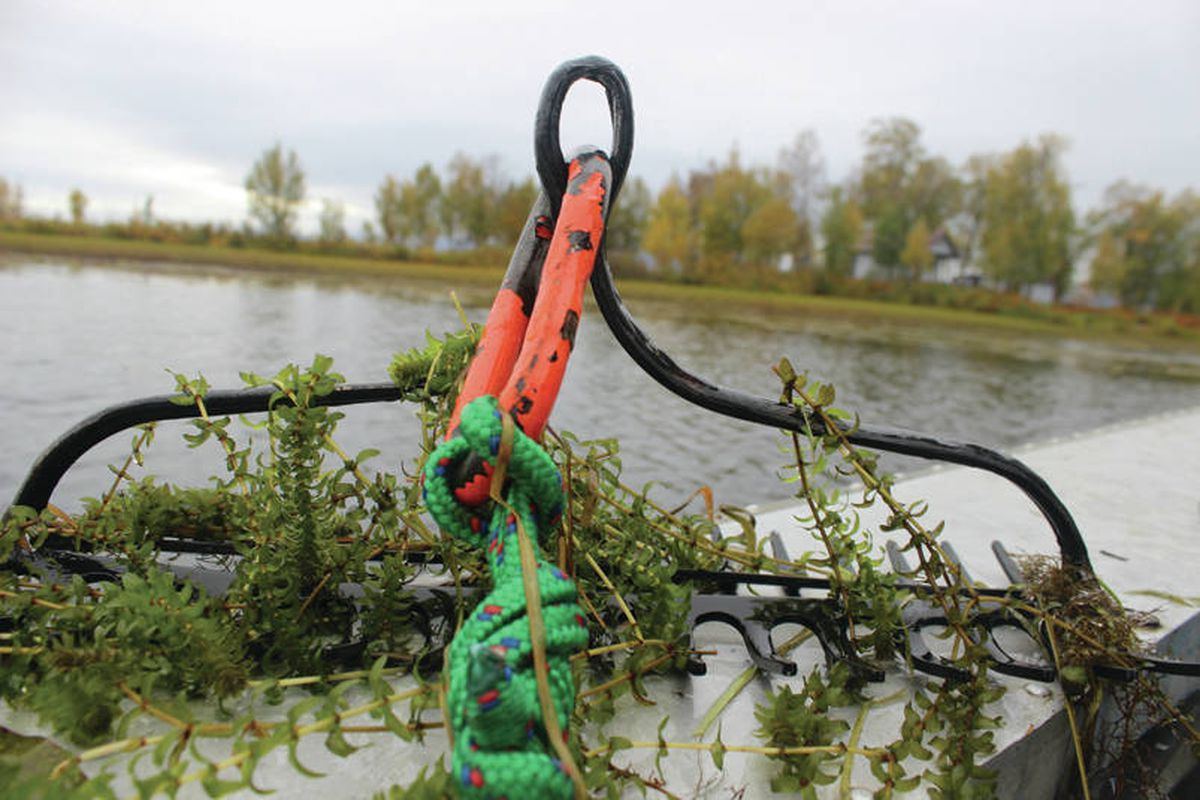 Elodea, an invasive species of vegetation, was discovered in Alexander Lake in Mat-Su in 2014 by researchers checking minnow traps. At the time, it covered 20 percent of the lake but now has spread to 90 percent. The Alaska Department of Fish and Game has closed it and nearby Sucker Lake to contain it while eradication efforts are pursued. (Alaska Department of Natural Resources photos)

Elodea, an invasive species of vegetation, was discovered in Alexander Lake in Mat-Su in 2014 by researchers checking minnow traps. At the time, it covered 20 percent of the lake but now has spread to 90 percent. The Alaska Department of Fish and Game has closed it and nearby Sucker Lake to contain it while eradication efforts are pursued. (Alaska Department of Natural Resources photos)

Mat-Su residents and state agencies are trying to gather enough support to stop an invasive water weed in the area before it’s too late.

Elodea, an aggressive aquatic plant, has made itself at home in several large lakes in the Susitna River drainage. When it was first detected in Alexander Lake in 2014, it only covered about 20 acres; by this year, it had increased to 90 percent of the lake’s area. Nearby Sucker Lake is in a similar state.

The Alaska Department of Fish and Game has closed Alexander and Sucker lakes to all access this summer, specifically targeting controlling the spread of elodea. The plant often hitches rides on boat propellers, in bilge water and on floatplane floats.

Kristine Dunker, who manages the invasive species program for ADFG, said she didn’t expect the closure this summer to affect the invasive northern pike population in the lake much because it will open again in the winter, when people frequently fish for them there. ADFG encourages people to harvest as many northern pike as they can. Pike can devastate salmon populations in lakes.

While elodea is just a plant, it’s more than an innocent bystander. When it’s invasive, it can grow so thick as to make lake water anoxic. Salmon can have a hard time navigating a deeply forested lake to find food as juveniles or spawning areas as adults, and other fish can be flat-out strangled in the lakes for lack of oxygen.

What’s more, it can spread by fragmentation — only a small piece has to be introduced to good habitat for the plant to flourish. It can survive under ice, and does well in slow-moving, shallow water.

The Susitna River Coalition is among the participants in a task force aimed at eradicating elodea from the Mat-Su area. Led by the Alaska Department of Natural Resources, the group includes ADFG, the Matanuska-Susitna Borough, the Tyonek Tribal Conservation District and a number of landowners.

The main point is not the direct threat to fish at present, but the potential for elodea to move out of those two lakes and affect the rest of the system, said Dan Coleman, a natural resource specialist with DNR’s Alaska Plant Materials Center. Coleman said he thought the chances of keeping elodea out of the rest of the Mat-Su were “very good” if the project successfully eradicates the weed in Alexander and Sucker lakes.

“These are just source populations sitting out there right now,” he said. “The sooner we get going on this project … the better.”

With the current prescriptions needed to kill the elodea, DNR estimates the cost at $850,000 for the first year for both lakes — and that’s just for the herbicide. Some organizations have already committed funding, including the Mat-Su Salmon Habitat Partnership and the Mat-Su Borough Fish and Wildlife Commission, but it’s not enough to carry the project through.

The group is looking for federal and state grants to support the eradication program, said Nicole Swenson, the conservation director for the Tyonek Tribal Conservation District and coordinator of the elodea task force. The local funding they’re looking for would serve as match funds to access federal grants, she said.

The sticker price may look high, but the price to eradicate it in the future would be much higher, she said.

“This project is getting close to a million (dollars) per year based on the predictions,” she said. “And the state is hurting, as we all know, for money, and we were just chasing grants and putting it all together. We’re piecemealing it together — when it takes a million dollars a year to get it done, (it’s difficult).”

Alexander Lake is complicated, with multiple streams feeding into it, multiple outlets and a system of wetlands around it.

The strategy the group would use would include releasing two herbicides — diquat and fluoridone — into the lakes and maintaining high enough concentrations for long enough to kill the elodea. Alexander Lake in particular has high water turnover — all the water in the lake is flushed out within 10 days, Coleman said.

Seeking additional funding, Wood said the Susitna River Coalition approached Donlin Gold for help. Donlin, which is working to obtain permits for a proposed gold mine in Southwestern Alaska, has proposed a pipeline to run through the Mat-Su area to Cook Inlet for natural gas to power the operations.

However, Donlin’s community projects committee did not receive the request with enough time, and the requested amount — $700,000, according to the company — was too much for the budget, according to external affairs manager Kristina Woolston.

The company only had a few days to respond, and when the Susitna River Coalition reduced its request to about $172,000, Donlin’s community investment committee did not have enough time to adequately consider engaging in a project of that size.

“We would consider working with Fish and Game, sport fish groups, industry and other local entities to solve the problem, not just treat the symptoms,” Woolston wrote in an email.

Melissa Heuer, the executive director of the Susitna River Coalition, said the group saw the project as a way for Donlin to contribute to a conservation area near the pipeline corridor, which will be affecting wetlands in the construction process.

Donlin has agreed to conditions set by the U.S. Army Corps of Engineers to do 4.5 acres of wetlands mitigation in the Mat-Su Borough in connection with its project, in addition to wetland conservation projects in the Calista region and in Cook Inlet.

“Where things could actually make a difference, I don’t think this was a time for (Donlin),” she said. “Hopefully they’ll come through in the future. I think they still would be a good partner, and people would appreciate seeing a company step up.”

The Mat-Su is far from the only place with elodea infestations in Alaska. The plant was first discovered in Eyak Lake near Cordova in the 1980s, thought to have been introduced from someone dumping an aquarium in the lake.

Since then, it has spread to Chena Slough near Fairbanks, Lake Hood in Anchorage and several lakes on the Kenai Peninsula, among other locations.

Residents say they think the elodea in Alexander Lake was likely introduced there by floatplanes arriving to fish in the lake.

There haven’t been any definitive documented cases of elodea infestations negatively affecting salmon runs in Alaska yet, but that may be due to a lack of data, Swenson said.

It would have been great to address the elodea a few years ago when it first surfaced, but time is of the essence now, Heuer said.

“I think if we could have done it two or three years ago, that would have been great,” she said.

“I think we’re really just reaching a key time that we still have an opportunity to stop it before it gets out of control. If we don’t stop it now, it’s just going to grow exponentially. Once it moves out of these water bodies and into the rest of the Mat-Su, it’s going to be almost impossible.”