They’re in their 90s. The Matanuska River is at their door, and they don’t want government money. 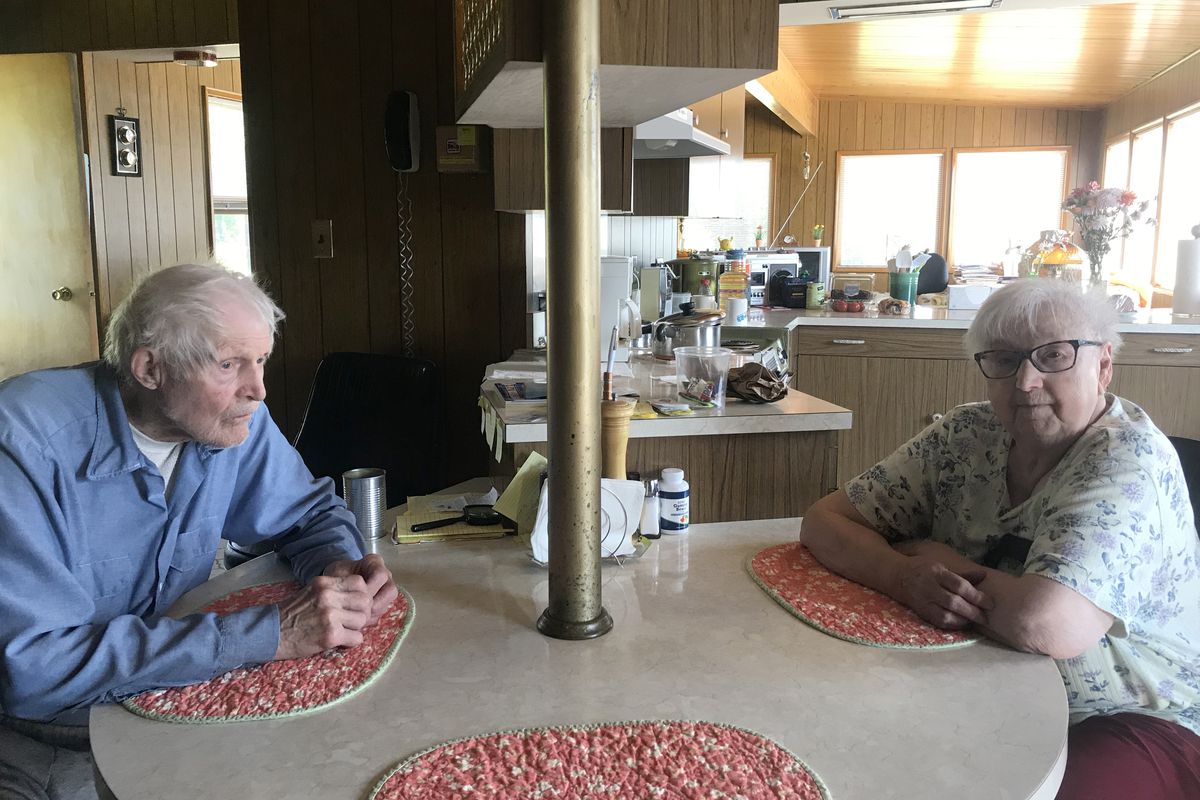 Ed and Val Musial sit at their kitchen table, June 26, 2019. Their home is endangered by the eroding banks of the Matanuska River. (Zaz Hollander / ADN)

Ed and Val Musial sit at their kitchen table, June 26, 2019. Their home is endangered by the eroding banks of the Matanuska River. (Zaz Hollander / ADN)

SUTTON -- Val Musial invites a visitor into the sturdy house her husband began building 60 years ago on more than six acres of ground far from the Matanuska River.

Instead of a small patio, the back of the house gives way to a sheer drop to gray rushing water.

“Look out my kitchen door. Don’t go out the door though,” Musial warns, gesturing down toward the slab of concrete at river’s edge. “My patio’s down there.”

And, as they’ve said for years to a series of reporters and gawkers drawn to the square green structures so near the water’s edge, they’re not leaving -- or taking federal money to move.

The Matanuska-Susitna Borough is working with nearly $4.5 million in federal Hazard Mitigation Grant Program money available to move people and structures off properties threatened by the river that’s swallowing earthen banks as it swells with summer snowmelt.

But the Musials aren’t interested. Ed Musial blames a series of finger dikes the state installed in the 1980s for channeling the river past their homes. The couple say the government should fix the river, not evict them.

“We built this. We put in every stitch of board,” Val Musial said. “We cut our first tree here August 1959 and we’ve been working on this place ever since.”

Several other riverfront residents eligible for the buyout are critical of the way the government is handling the program.

This round of federal buyout money was announced last year. At the time, there were 15 eligible properties along the river in Sutton and Buttte.

Now only about half of that number are still involved, and contamination across from one Butte property is creating a bureaucratic snarl there.

The borough has so far spent $210,000 to acquire two properties in the Sutton stretch of the river, according to Taunnie Boothby, the borough planner coordinating the program. The properties will become off-limits to development once razed.

Buyout participants Mike and Donnah-Rae Pearson arrived 30 years ago when the river was far away.

The Pearsons got $110,000 for their three-story, three-bedroom place with other structures that they estimate would cost $300,000 to rebuild all told, Donnah-Rae Pearson said. They have to pay taxes on the money.

“Of course, we don’t have any recourse. We either take it or not,” Pearson said. “So we decided to go ahead.”

The couple -- he’s a retired equipment operator, she’s a retired teacher -- are moving to land they own about three miles away. They must be out by August. That’s when demolition starts.

The Pearsons tried to appeal the appraisal, but couldn’t find someone to do it despite reaching out to many, Donnah-Rae Pearson said.

Another neighbor rejected the buyout because her appraisal was too low, Pearson said. A third has hired an attorney after receiving a $35,000 appraisal.

The buyouts come with an appeal process, but federal policies call for a fairly rigorous appraisal that’s time-consuming, Boothby said.

It’s also hard for people to see their land valued at post-erosion levels, she said, but the appraisals have to reflect the loss that’s occurred and is expected to continue, “as-is, today’s value.”

Some say people who build anywhere near a powerful glacial river with a history of dramatic course changes like the Matanuska shouldn’t be surprised -- or compensated, for that matter -- when the water comes for them.

The Matanuska drains a 2,100-square-mile basin in the Chugach and Talkeetna mountains and carries an estimated 6 million tons of sand, silt and clay every year down a wide but shallow course. The river meanders bank to bank, dumping silt until it fills one side and returns to the other. Thirty years ago, the Matanuska’s main channel hugged the Palmer side. Now it’s over at Butte.

Buyouts and home relocations have occurred for decades as government agencies try to move people away from the Matanuska. There is no “erosion zone” banning development in places the river eats its banks, which can occur in places outside the mapped floodplain.

The current round of buyouts is moving from Sutton downriver to Butte, where another five or six landowners are working with the borough to get paid to move off erosion-consumed land before the river takes their homes, though that program is being delayed by unrelated contamination issues.

An old store and gas station that wasn’t properly cleaned up is sending a plume of benzene through the ground, the Alaska Department of Environmental Conservation says. A prediction of the plume’s spread plotted part of it on an old restaurant property next to the river that’s part of the buyout.

DEC sent a letter saying the agency won’t hold the borough responsible if they take ownership of the property, said Josh Barsis, with the state’s contaminated sites program. But the issue still hasn’t been resolved, and it’s holding up progress on that property and all the others in the Butte section of the river.

DEC is willing to install a monitoring well on the buyout property to confirm any contamination and get the buyout restarted, Barsis said. “It’s really unfortunate.”

Boothby said she’d hoped to start demolitions this summer but now isn’t sure they’ll start until next spring.

Despite the hurdles, she said more landowners are eager to get involved if more buyout money becomes available.

“People are coming to me now, asking,” she said.