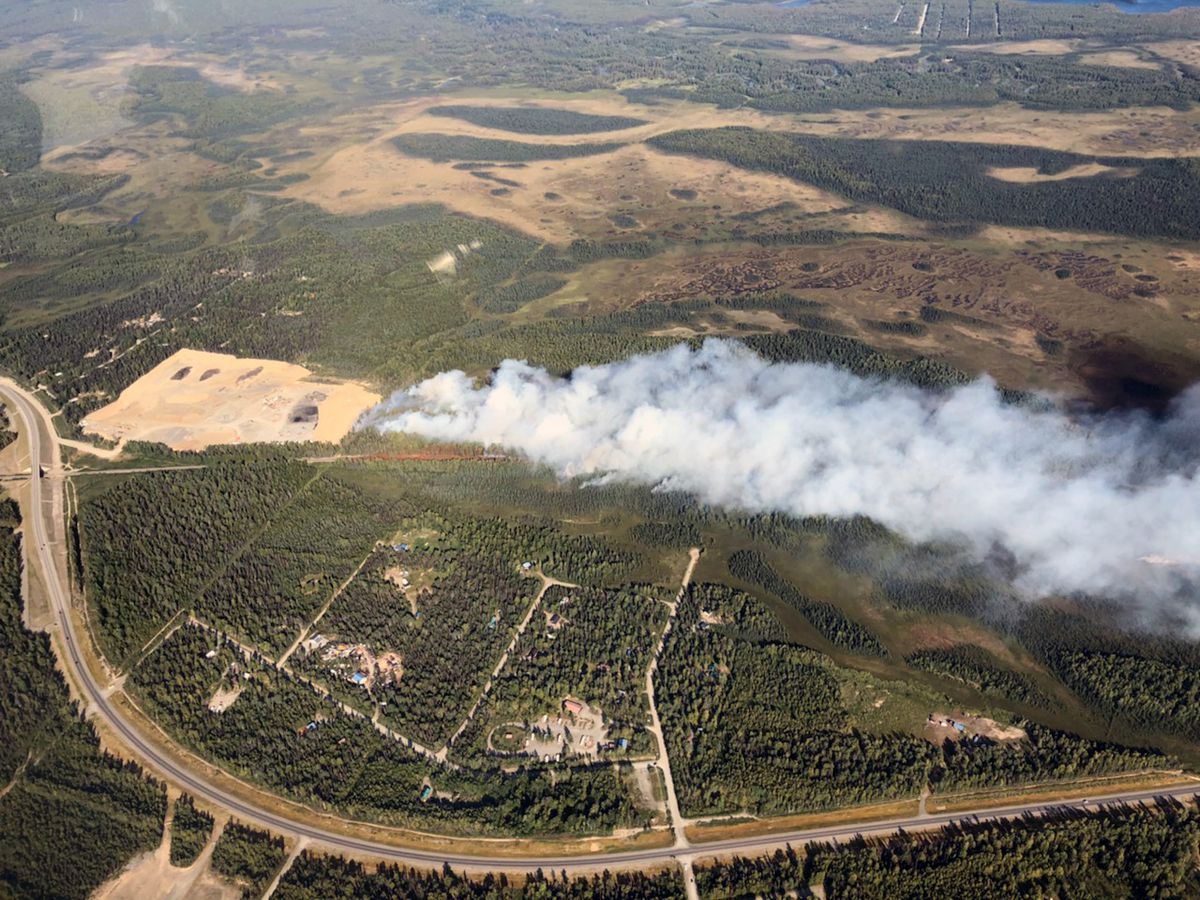 Update, 11 a.m. Sunday: Authorities have ordered evacuations at recreational cabin sites near Red Shirt Lake, in the Nancy Lake Recreation Area, as a wildfire burning in the area spreads.

The Deshka Landing fire is burning about 4 miles west of the Parks Highway near Mile 68. It is “actively burning” but has “been held near Rolly Creek,” about a half mile from the South Rolly Campground. Fire managers say the Parks Highway is open. A pilot car is leading vehicles through a stretch from mileposts 88 to 93 where traffic has been reduced to one lane.

The fire grew to between 600 and 1,000 acres as of Sunday morning and is moving southeast. the Alaska Division of Forestry said in an update Sunday.

Around 10 a.m. on Sunday, the Matanuska-Susitna Borough advised property owners in the Red Shirt Lake area to evacuate.

“Weather forecasts are forecasting that the winds will pick up again today so therefore people currently at Red Shirt Lake and the surrounding areas are instructed to evacuate the area out of an abundance of caution,” the borough said in a post on its Facebook page.

Nancy Lake Parkway will be closed at mile 2.2 to stop people from entering area, according to the borough.

People should be able to hike out of Red Shirt Lake on the Red Shirt Lake trail to access cars parked at the trailhead. “Vehicles will be able to leave the park at the barricades at mile 2.2,” the borough said. People can leave the Lynx Lake and Butterfly Lake areas through the gate at mile 4 of Lynx Lake Road.

About 20 firefighters are working on the Deshka Landing fire as of Sunday morning, with a new crew from Tok scheduled to arrive soon the Division of Forestry said.

Update, 8 a.m. Sunday: The Parks Highway remained open Sunday morning and no structures had been lost in the wildfire north of Willow. But danger remains high and Mat-Su Borough emergency officials were warning people to stay clear of the area.

“Conditions are expected to worsen today, please avoid the Parks Highway between miles 87 and 94,” said an announcement on the Mat-Su Borough’s Facebook page posted just before 8 a.m.. "The Parks Highway will be closed intermittently throughout the day by the Alaska State Troopers.

“As of this morning, no structures have been lost.”

A wind-driven wildfire between Willow and the Talkeetna cutoff Saturday evening prompted officials to close the Parks Highway to traffic for several hours and issue an evacuation notice for residents of a nearby neighborhood and RV park.

The McKinley Fire, reported around 4:20 p.m., grew rapidly, according to the Alaska Division of Forestry. It was burning about a half-mile east of Mile 91 of the Parks Highway — one of several Mat-Su fires that officials say resulted from strong winds either knocking down power lines or causing trees to fall on power lines Saturday.

Its size was estimated at 120 to 140 acres as of 6:45 p.m. The fire, originally east of the Alaska Railroad tracks running roughly parallel to the Parks Highway on its eastern side, jumped the tracks and was moving west toward the highway at last report, the Division of Forestry said.

Firefighters were working to keep the fire from crossing over the highway. An air tanker was dropping retardant around the fire as a helicopter made water drops. A helitack squad, a state forestry engine and smokejumpers were attacking the fire on the ground, according to the Division of Forestry.

Pilot cars were escorting traffic on the Parks Highway between Mile 88 and Mile 93 because of the McKinley Fire, troopers said, and motorists should expect delays and possibly limited visibility due to smoke. (The highway, which was closed along that stretch Saturday evening, had reopened by 11:10 p.m. according to troopers.) Residents of the Wild Bill Way area, Yancy Drive and the Mat-Su RV Park and Campground were ordered to evacuate.

Troopers urged other residents between Mile 88 and Mile 93 of the Parks Highway to evacuate immediately because of the fire.

A look southbound from the Parks Highway at the McKinley fire in the early evening of 8/17/19. Photo courtesy of Robert Sheldon.

Troopers were asking people to avoid the area and watch for emergency vehicles responding to the fire.

Evacuation centers were set up at the Upper Susitna Senior Center, 16463 Helena Ave. in Talkeetna north of the fire, and the Willow Community Center at Mile 69 south of the fire.

Northbound travel on the Alaska Railroad was restricted because of the McKinley Fire, in addition to a landslide around Denali National Park and Preserve, fire officials said.

Firefighters had responded to several other wildfires that broke out in the Mat-Su on Saturday afternoon. Most were extinguished or in the process of being put out, although a fire reported near Deshka Landing — about 22 miles south of the McKinley Fire, and 4 1/2 miles west of the Parks Highway near Mile 68 — was burning about 100 acres, according to the Division of Forestry. That fire “is within one-half mile of multiple recreational cabins along the Susitna River northeast of the fire.”