Carrizo’s last stand: A rescued cat from Arizona and the Alaska photographer who can’t save him this time 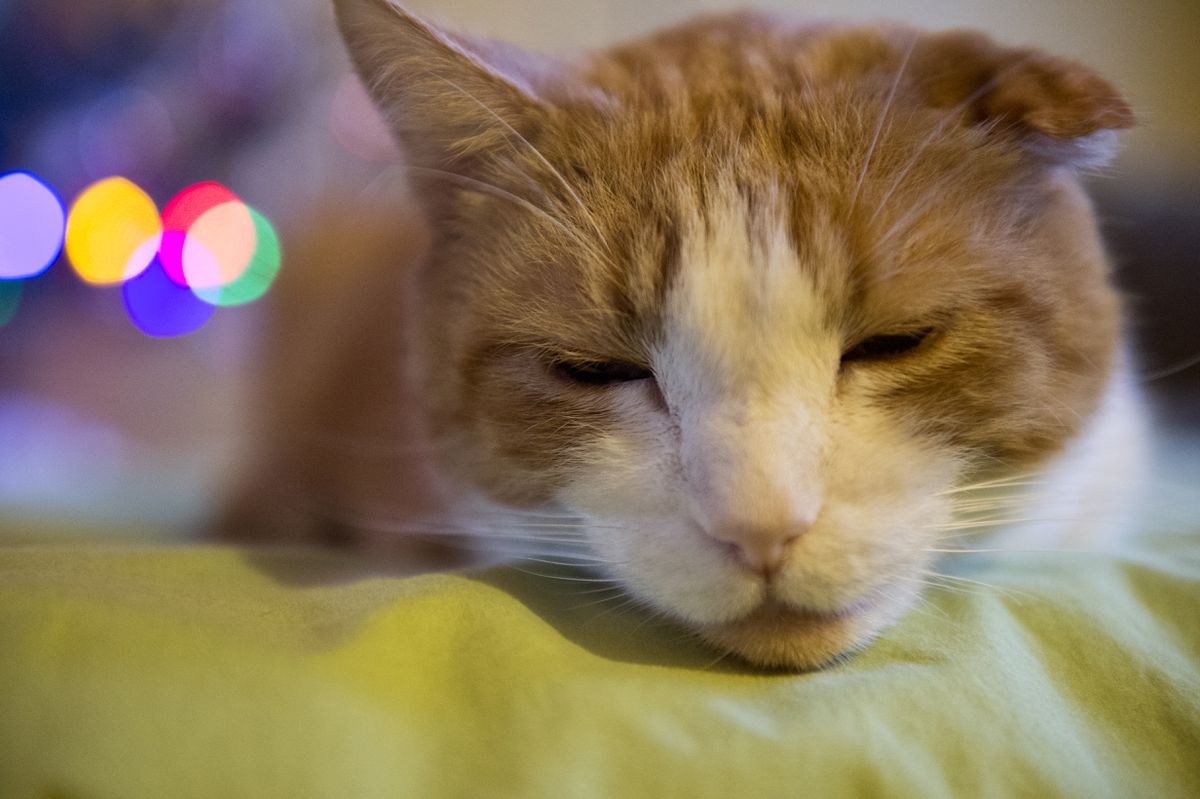 WASILLA — Before Bill Hess came to rescue Carrizo, the orange cat survived the perils of outdoor life on the Fort Apache Indian Reservation in Arizona and the terrors of Cat Killer Dog.

Now Carrizo faces a situation without reprieve: a tumor near his kidneys that appears to be sapping his red blood cells. A vet last week said the cat, around 10 years old, doesn’t have much time left.

Hess brought Carrizo from the reservation village of the same name to the Wasilla home he shares with his wife, Margie, a White Mountain Apache, early Christmas morning six years ago.

He hopes they can all share one more Christmas together.

Margie, Hess says, is his best friend. But Carrizo is his constant companion.

Carrizo is the subject of an ebook Hess self-published in 2014 on the iBooks Store and then published as a printed coffee table book on Amazon this year.

“Carrizo (A Village/A Cat/A Cat Killer Dog/A Christmas Story)" tells the tale of the cat’s hard times on Margie’s ancestral lands in photos and stories of friends and family: Margie’s mother, the family matriarch Rose Roosevelt; the couple’s children and raucous grandchildren; and another favorite subject of Hess, the Frequent School Bus, which is any school bus that happens into the frame of his camera.

Hess discovered Carrizo in Arizona during a 2013 visit with Roosevelt. Carrizo jumped in front of a school bus as the photographer sought just that image. Hess loved the cat immediately. But the orange and white animal was “feral. Wary. Hair trigger spooked,” he wrote.

It took many tries, but finally the cat he called “Kitty Buddy” became Carrizo, chirping “a little greeting that sounded a bit like flying geese nigliqing” -- the Inupiat word for geese and the sound the birds make flying overhead.

“I had never before heard a cat speak in such a voice, nor (have I) heard another do so since,” Hess wrote.

When a neighbor’s dog killed another cat, and then tried to kill Carrizo, he decided to bring him home to Alaska, a story in itself of bureaucracy and a misguided veterinarian. They landed in Anchorage late Christmas Eve and arrived at home in Wasilla at 1 a.m. Christmas Day.

Hess shot the photos in the book with an iPhone 5s instead of the heavy Canon professional cameras used for the documentary photography that won him decades of respect.

Hess came from a Mormon family and attended Brigham Young University in Utah, where he courted Margie. He worked for a tribal newspaper in Arizona before the couple moved their young family to Alaska. Hess covered village news for The Tundra Times in the early 1980s.

Hess developed a reputation for cross-cultural storytelling with his 1999 book, “The Gift of the Whale: The Inupiat Bowhead Hunt, A Sacred Tradition," and earned the trust of the Arctic whaling community, granted rare access to camps on the ice, family gatherings and celebrations.

He also adapted easily to the fluid, informal style of social media. For a time, Hess posted regular updates to a blog about the family cats. He began posting photos regularly on Instagram in 2013.

Now, in posts on Instagram and Facebook, he’s chronicling the last days of Carrizo, who’s become a cock-eared, rust-colored symbol of feline resilience -- and a distinctly Alaskan version of the viral felines like Grumpy Cat who attract international followers.

And like Grumpy, the frown-faced Internet sensation who died in May, Carrizo developed a fanbase that’s now mourning the news of his prognosis.

[This decade taught us to love viral pets. Now we have to grieve their deaths.]

Hess initially hoped that an expensive surgery could remove the tumor lurking in his cat’s abdomen. His red blood cell count was so low that Carrizo needed a presurgery blood transfusion.

But in a series of posts last week, Hess cataloged his heartbreaking decision to forgo surgery so Carrizo could spend his last days in comfort.

The day of the operation, Hess met with the surgeon and learned the mass could be attached to organs and arteries, which would make it impossible to remove safely. Carrizo, he was told, had a 50-50 chance of dying on the operating table. If he survived, he faced treatments, possibly more surgeries, and even chemotherapy. Hess decided to take Carrizo home.

A deluge of prayers and support followed. One friend posted a Facebook comment saying she read “Carrizo” with her grandson: “It was a beautiful, difficult read, knowing what we know now. We cried for you, for Carrizo. We both loved the book. Thank you for sharing this beautiful soul.”

Carrizo this week looked good, a little tired but relaxed, his ears monitoring the room like radar dishes. He’s taken to spending a lot of time on two ottomans in the cozy living room, near a Christmas tree against one wall.

“We met him six years ago today,” Margie Hess said, remembering the couple’s first sighting of the orange cat near her mother’s house in his small namesake village. “By Christmas he was home.”

Hess tears up talking about the time when Carrizo will no longer share his office and his life. He doesn’t want another cat until he’s 75 -- when the animal might outlive him.

He’s somewhat consoled that because of the book, Carrizo’s story will live on.