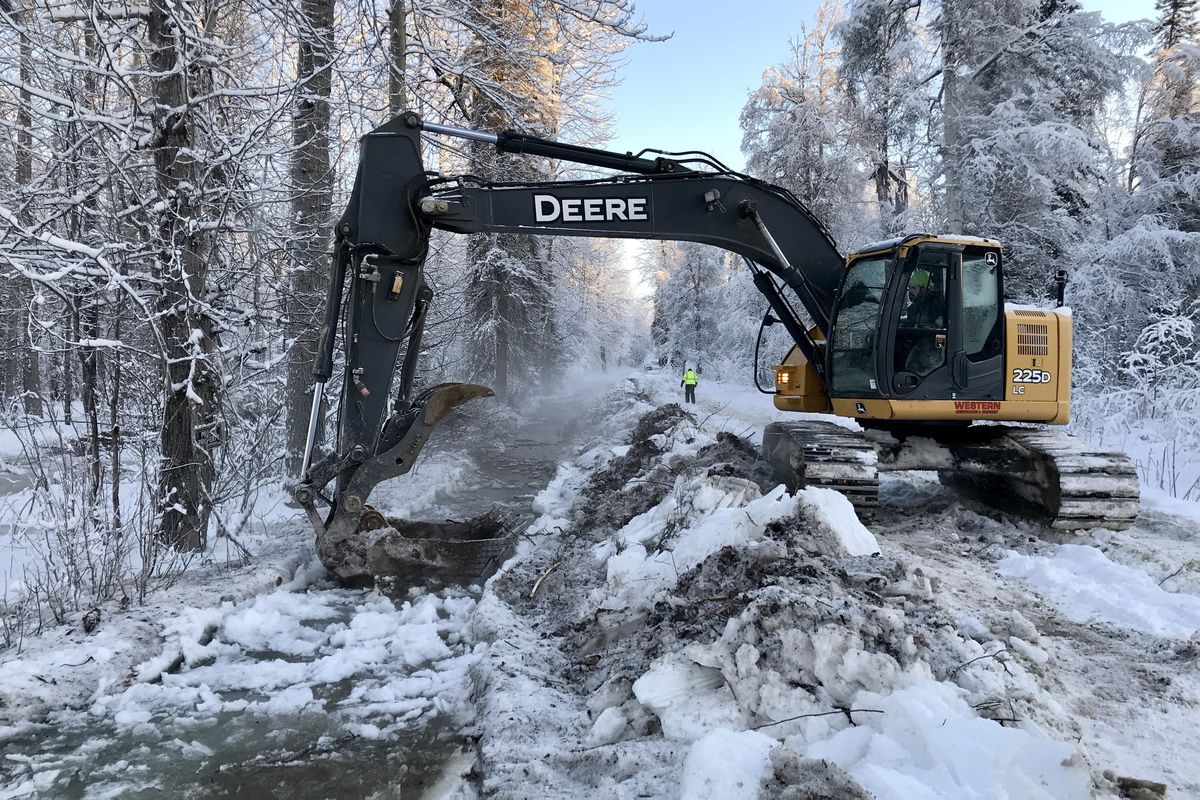 The Matanuska-Susitna Borough used an excavator to relieve Willow Creek flood water along the road leading to the Deneki Bridge on Friday, Dec. 27, 2019. (Bill Roth / ADN)

The Matanuska-Susitna Borough used an excavator to relieve Willow Creek flood water along the road leading to the Deneki Bridge on Friday, Dec. 27, 2019. (Bill Roth / ADN)

Subzero temperatures and snow have exacerbated flooding conditions on Willow Creek that emerged last weekend when an ice jam backed up at Deneki Bridge, officials said.

Six homes in the Friday subdivision of Willow flooded, and residents evacuated from 13 homes after rescue crews warned that homes across the bridge would be cut off from leaving as the flooding was mitigated and the bridge was repaired.

The bridge is the sole road connecting homes on the north side to the rest of the community, and Matanuska-Susitna Borough emergency services director Ken Barkley said by email Friday that “crews are working diligently to gain access to the bridge.”

“We do not have a time line,” Barkley said Friday. “Weather is not our friend — (minus-18) today in Willow.”

[More than a dozen homes evacuated due to Willow Creek flooding; Mat-Su officials say bridge could be closed for days]

Large pieces of ice restricted normal water flow at the bridge and caused the initial flooding late Saturday and early Sunday. By Thursday, conditions had significantly deteriorated, Barkley said. The water level was significantly higher and new ice jams were forming around six cars frozen into the creek, he said.

Temperatures are expected to plummet as the weekend hits, and Barkley said falling snow is also hindering the situation. Rising water Thursday made the creek inaccessible to rescue crews, Barkley said.

Officials from the Mat-Su Borough, Alaska Division of Homeland Security and Emergency Management, state Department of Health and Social Services and the National Guard, as well as engineers, met Thursday to try to mitigate the flooding. Barkley said crews plan to bring big equipment to try to break up any ice jams around the vehicles on Friday, but a plan has not yet been created to fix the larger jam at the bridge.

Barkley said the borough is looking at old trails along the creek to see if a temporary road could be installed to give stranded residents access to the rest of the community. He said it’s unclear how long it may take to create a temporary roadway as crews will need a permit to start work in the area.

Conditions had deteriorated so significantly Thursday, Barkley said, that crews and first responders did not have clear access points to cross the creek safely.

The Mat-Su Borough issued a local disaster declaration Monday, which Barkley said will unlock emergency funds, and asked the governor to declare the situation an emergency, which would allocate state funds to the relief efforts.

It’s unclear how long it may take before a state declaration is considered, but Barkley said Gov. Mike Dunleavy is “very invested and he’s aware of what’s happening here.”

The borough has advised residents not to cross the creek, and Barkley said the flowing water is “extremely dangerous." Earlier this week, crews were called to rescue people from four cars that became trapped in the flowing water when they tried to drive across, Barkley said. The cars are now frozen into the creek.

“Those cars aren’t coming out until spring,” Barkley said.

Residents tried to take matters into their own hands by attempting to clear Deneki Road with heavy machinery, according to Barkley. Their efforts have made the situation worse, however, because it caused water to pool on the road, the borough wrote in a statement.