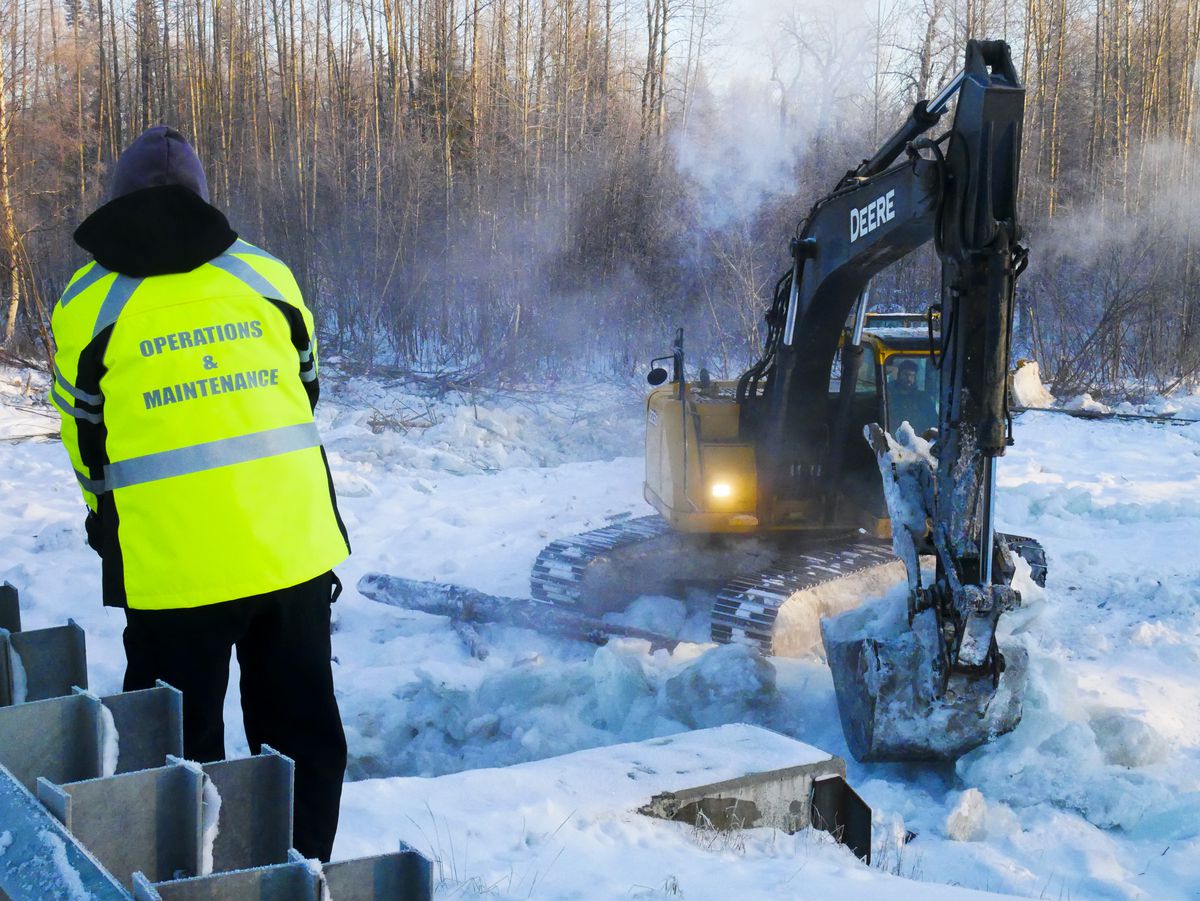 Work continues at Willow Creek Wednesday, Jan. 8, 2020, to restore the flow to the channels of the river after an ice jam Dec. 22, 2019 forced water over the banks. (Photo by Stefan Hinman / MSB)

Work continues at Willow Creek Wednesday, Jan. 8, 2020, to restore the flow to the channels of the river after an ice jam Dec. 22, 2019 forced water over the banks. (Photo by Stefan Hinman / MSB)

Residents who were stuck in their homes after an ice jam on Willow Creek last month closed the Deneki Bridge for more than two weeks are now able to cross the flooded creek on a rerouted road constructed of ice.

Crews began clearing the ice jam Wednesday, and a Matanuska-Susitna Borough official says the roadway could be back to normal within a week.

Large chunks of ice jammed at the Deneki Bridge and restricted normal water flow and caused upstream flooding in the Friday subdivision of Willow. Numerous residents were evacuated as water rushed into their homes into the early hours of Dec. 22. The bridge, which was the only way in and out of the neighborhood north of the creek, has been closed since.

Crews have worked on site daily to clear the road and mitigate the damage, but subzero temperatures and snowfall have hampered progress. The Mat-Su Borough Assembly approved a plan Tuesday night that will allow crews to break up the ice jam.

Mat-Su Public Works Director Terry Dolan said crews used heavy machinery Wednesday to clear ice at the bottom of the bridge and will continue to work their way up so the water can flow back into the channel. The ice will be stacked alongside the creek.

Crews opened the channel downstream by Wednesday afternoon, according to Dolan, and the water was flowing as planned. The work may continue into Friday, he said.

After the water stops flowing over Deneki Road, crews will remove the remaining ice and repair the road, Dolan said. The roadwork will likely take a few days and Dolan said it’s possible for Deneki Road to be back to normal within a week if everything goes as planned.

Dolan said additional flooding downstream is not expected because water has already been flowing back into the creek as the upstream flooding snaked its way through residential properties before returning. He said the borough will be monitoring for any problems, however, because there is some concern about the water’s pathway.

The project will cost roughly $40,000, which Dolan said will mainly come from a state grant that the borough received several years ago to focus on river management. He said the work done during the last few weeks has likely already cost upwards of $40,000, and that will also be covered by the grant.

On Monday, the borough created a one-lane, elevated ice road adjacent to Deneki Road to make the area more accessible. Dolan said the road has made it possible for residents to travel across the flooded creek.

During Tuesday’s assembly meeting, the borough extended a local disaster declaration issued Dec. 23. The state has not issued an emergency declaration.