A Jeep broke through the ice at Knik Glacier. Getting it out took a team effort. 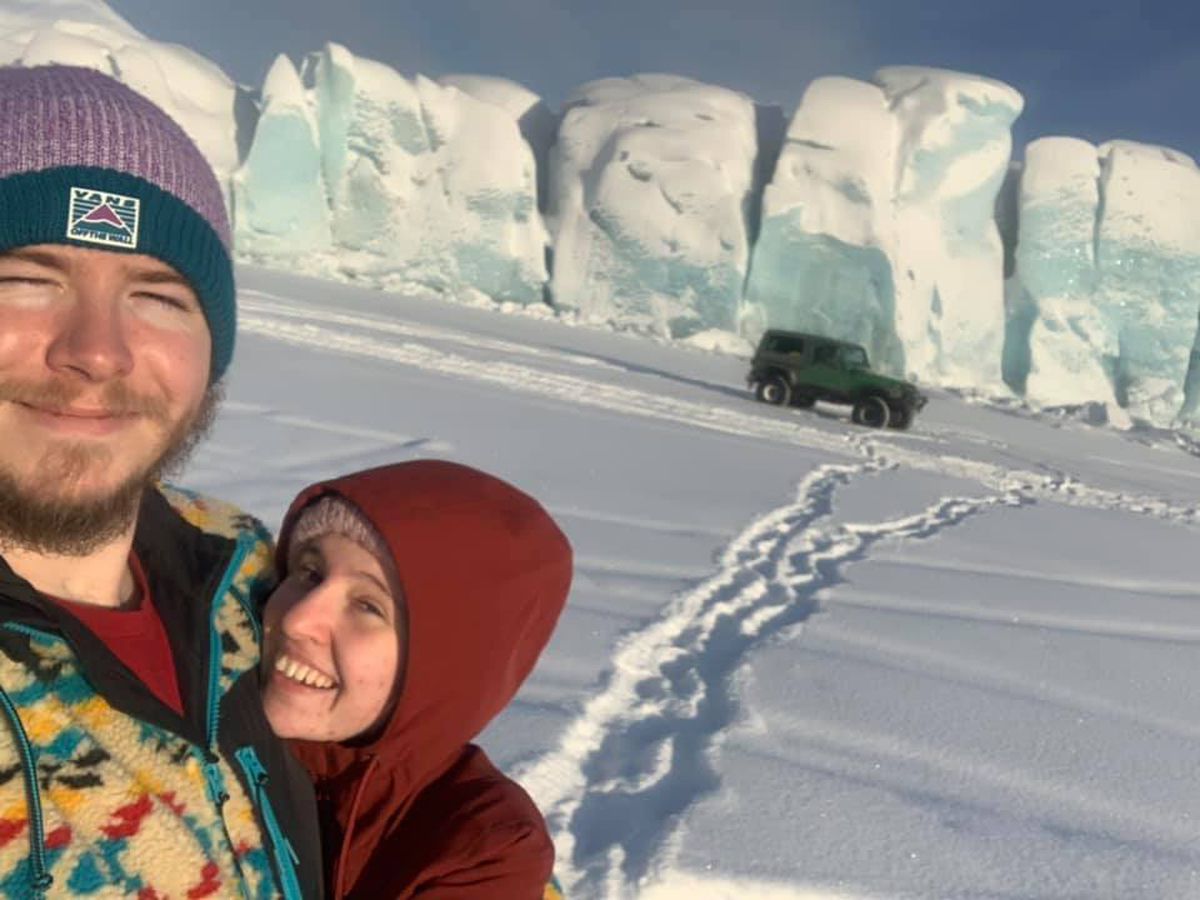 Josh Tills and his girlfriend Taylor Wilson smile for a photo at the Knik Glacier on Sunday, Jan. 26, 2020. Shortly after taking this photo, Tills' Jeep partially sank. (Photo by Josh Tills)

Josh Tills and his girlfriend Taylor Wilson smile for a photo at the Knik Glacier on Sunday, Jan. 26, 2020. Shortly after taking this photo, Tills' Jeep partially sank. (Photo by Josh Tills)

When Josh Tills headed to Knik Glacier on Sunday, he wanted to make new friends. He moved to Anchorage in October and was eager to get involved in the local off-roading community.

He still says Sunday was a great day — aside from when his 2005 Jeep Wrangler Unlimited broke through the ice and sank several feet into the water of the lake near the glacier face.

Tills, 28, discovered Jeep off-roading through friends when he was assigned to Fort Wainwright in Fairbanks. He said he quickly became enamored with Alaska adventure. He left the military several years ago and is now the general manager of an Anchorage movie theater.

He’s been off-roading for about six years but said the terrain near Anchorage is different from that of the Fairbanks area. Sunday was his first time driving near a glacier.

Knik Glacier lies about 20 miles southeast of Palmer. It’s a popular winter destination for people on snowmachines, off-road vehicles, fat-tire bikes and cross-country skis who want to get a closer look at its blue-tinged walls of ice and glacial icebergs frozen in place in the lake, which feeds the Knik River.

Accessing the glacier involves traveling across lake and river ice, and visitors assume substantial risk if something bad happens: Department of Natural Resources spokesman Dan Saddler said by email Thursday that he didn’t believe the area was patrolled regularly by staff. He added that people should exercise caution where natural hazards exist and be able to engage self-rescue techniques if needed.

On Sunday, Tills met up with people he’d connected with through a Facebook group at the Jim Creek parking lot. Nearly a dozen vehicles drove toward the glacier, and Tills said that when they arrived, there were 30 to 40 vehicles on the frozen lake.

The group split up as they explored and snapped photos. Tills saw a few vehicles close to the glacier and headed in that direction.

“Some people have said we got too close to the glacier — which I’ve never been out by a glacier, but there were other people within the same distance and we went where another Jeep already had been,” he said. “So we want to say it was just bad luck, you know? But I guess maybe it’s a mix of not knowing and bad luck.”

As he started to drive away, Tills heard a loud cracking noise.

“I’ve heard lakes shift and crack before, so I was like ‘Oh, God’ — it’s always scary, but I wasn’t too concerned. But then we got another couple feet and then the Jeep went through,” he said.

When he looked back, water was pouring in through the back windows.

He yelled to his girlfriend to climb out. She jumped onto the ice and ran to find help from others nearby.

Scott Rees was in a truck nearby and saw the Jeep sinking. He grabbed his tow rope and tried to pull Tills’ Jeep from water, but the rope snapped. Rees got another rope and reached into the water to tie it onto the Jeep’s axle.

By that time, Tills was sitting in water. The temperature outside was around 20 below zero.

Then the engine cut on his Jeep and he climbed out the window. He assumed the Jeep was gone.

Ice is known to be more unstable near glaciers, said Travis Jensen, the land manager at the Knik River Public Use Area.

“Given normal current flow and the movement of a glacier, the ice next to the glacier can be broken or cracked,” he said.

“Although you can’t see it happening, the glacier is always moving and is disturbing the ice in front of it,” Davis said in an email. "If people are going out there on their own, they need to use this as a lesson of what can happen.”

Tills reached out to the Department of Natural Resources because he was concerned that fuel may have spilled. Fortunately, the fuel tank was intact, Jensen said.

Tills and the others in the off-roading group were using the public use area appropriately and didn’t need any extra authorization.

“In this case, a motorized recreational group had an unfortunate situation occur to one of their member’s vehicle,” Jensen said in an email. “They assisted as best they could, sought out advice where appropriate and came together to retrieve the vehicle quickly and safely thereby minimizing impacts to state lands/waters.”

Davis said the off-roading community works “to keep a peaceful balance with nature and we truly strive to leave nothing more than tracks.”

Tills was shocked to find out his Jeep was still halfway above water Monday. A large shelf of ice rested below the Jeep and helped keep it afloat, he said.

Caption
A group of Jeep drivers pulled a vehicle from the ice near Knik Glacier on Tuesday, Jan. 28, 2020. (Photo by Travis Davis)
Wait 1 second to continue.

His insurance company sent divers and a helicopter team to assess the situation Tuesday. About a half-dozen members of the off-roading community gathered to watch the recovery. Davis said they carefully checked ice depth as they moved closer to the scene.

Divers prepared the vehicle for lifting, but bad weather prevented the helicopter pilot from taking off. Instead, the people who had gathered to watch decided to help out.

Three drivers attached winch lines and began to pull, slowly towing Tills’ Jeep from the hole and eventually back to the parking lot. Davis said another three vehicles were attached to anchor them in case the Jeep began to slide.

From there, a tow truck picked up the Jeep and brought it to Ice Monkey Garage in Anchorage. Owner Casey Durand offered to let Tills dry out the Jeep in his garage for free.

“I saw the photo online and a bunch of people reached out to me because they know I like to help,” he said. “The biggest thing when you’ve got water and electronics is getting it thawed out and dry as quickly as possible.”

The engine miraculously stayed dry, and Tills said he hopes to get the Jeep running again soon. On Wednesday night, Durand and three other men worked alongside Tills in the garage to determine the extent of the damage.

“This was a group effort where we, as an off-road community, came together to help out one of our own,” Davis said. “None of us had even met the owner until we had the Jeep back at the parking lot.”

Tills ended up making friends, but in a very different way from how he planned. He said he wants to go off-roading again but will probably hang closer to the group next time.

He said he feels lucky — both to have survived and to have such strong support from people who were strangers only a few days earlier.

And on Wednesday night, after hours in the shop, the Jeep’s headlights and windshield wipers blinked back to life.