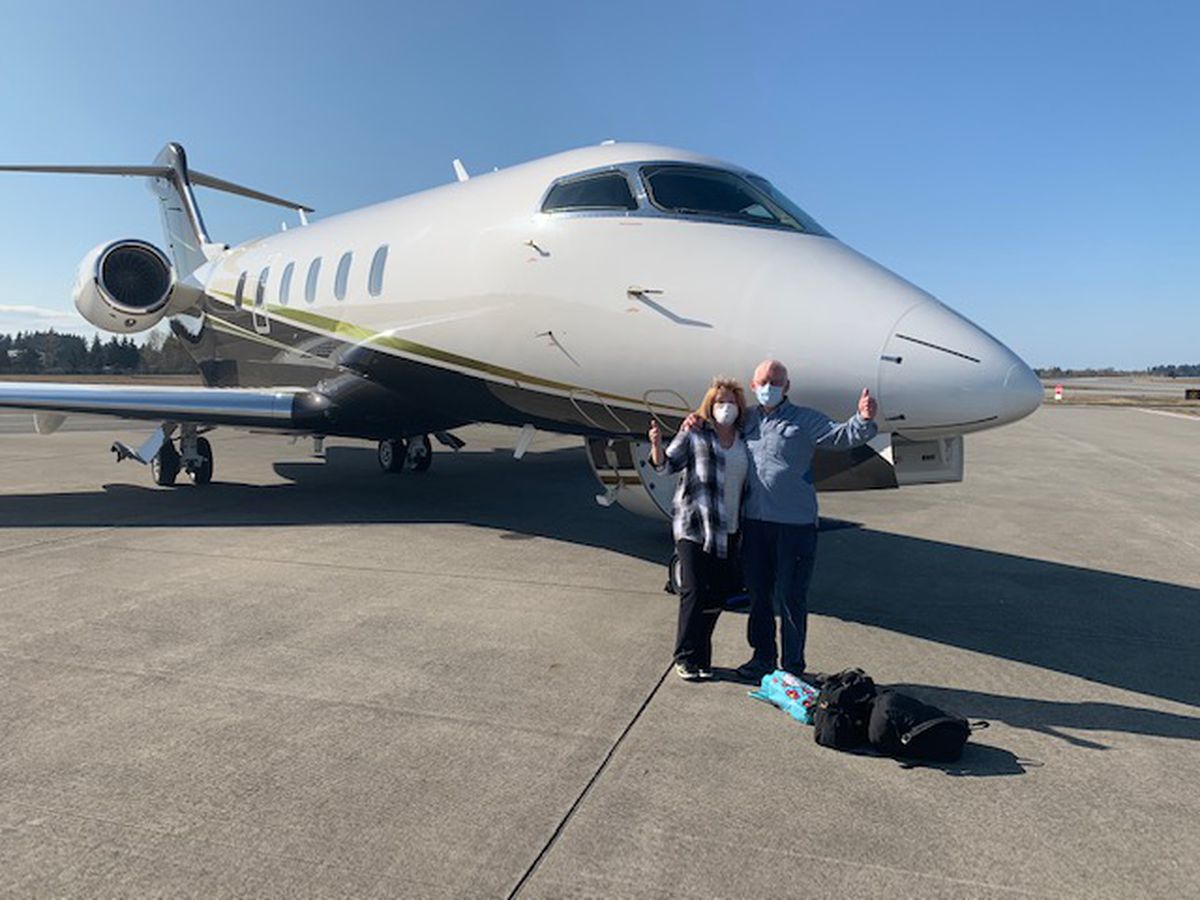 Susie and Dave Schaefer wear masks as they prepare to board a chartered plane to take them home to Alaska. The Wasilla couple contracted COVID-19 while aboard the Coral Princess cruise ship. (Photo courtesy of Susie Schaefer)

Susie and Dave Schaefer wear masks as they prepare to board a chartered plane to take them home to Alaska. The Wasilla couple contracted COVID-19 while aboard the Coral Princess cruise ship. (Photo courtesy of Susie Schaefer)

When Susie Schaefer of Wasilla first fell ill, it was just a headache and a fever.

She and her husband, Dave, were on board the Coral Princess cruise ship and headed for Miami, where they hoped to finally disembark. As COVID-19 broke out across the world, ports closed and turned the cruise ship away, leaving passengers unclear about when or how they would return home.

Within days, Schaefer’s temperature had skyrocketed so high that her body shook and she couldn’t even think clearly.

“I know my fever was bad enough that I was not making any sense,” she said. “My husband was trying to have a conversation with me and I think the only word I was able to say to him was ‘fish,’ and I have no idea why, but that was my answer to everything.”

Her body surged with so much pain that “Tylenol didn’t even put a dent in it,” she said. The illness was unrelenting and like nothing 59-year-old Schaefer had ever felt before.

“It was like being demonically possessed by a honey badger,” she said. “You just felt so bad.”

Doctors on the ship told Schaefer to hold tight. There wasn’t much they could do for her until they docked.

The couple had boarded the cruise ship at the beginning of March and was eager to spend 32 days seeing new places. At the time, they weren’t worried about the virus.

The first few weeks of the cruise went great — they saw penguins in the Falkland Islands and made friends with others on board. But by the end of the month, passengers began to fall ill and everyone was ordered to quarantine in their rooms.

The Schaefers celebrated their 31st wedding anniversary in quarantine.

Several people died before the ship reached Miami on April 4. Susie Schaefer said she could see several others being taken from the ship in ambulances.

When the doctor came to her room on April 5, he was outfitted in a hazmat suit. She and another passenger were taken to a nearby hospital, where they waited in a tent outside for several hours before they were tested for COVID-19. She was then told that she was free to go, and the hospital would not be admitting her.

The cruise company sent a car to pick Schaefer up and placed her in a Miami hotel room. Her husband wasn’t yet allowed off the boat. Schaefer was sick, alone and unsure about what would come next.

“That was terrifying to me,” she said. “When I had my high fever and when I was delirious, my body was shaking so hard that I could not stand up by myself. When my husband was in the cabin with me, he could lay next to me and hold me to keep me warm to stop the chills. He could get me Tylenol and he would make sure that I drank enough. I was afraid in that hotel room, that if I got delirious, if my fever spiked, if I fell down, no one would know. There was no one there to know.”

Good news came a few days later when Dave sent her a photo of the charter plane tickets. Cruise ship passengers were barred from flying on commercial flights because of the risk of transmitting COVID-19, but the company chartered an eight-person jet to take the Schaefers and five other passengers to Seattle.

“When I got to the airfield and I saw them coming up in the bus, and it stopped and Dave came out — oh my gosh, that to me, it was like every mushy romantic scene in the movies," she said. "There he was: He’s wearing his mask, he’s wearing his glasses, he’s coming toward me with his arms open. I just cried.”

From Seattle, the Wasilla couple transferred to another small plane and flew to Anchorage.

The cruise company arranged for a limousine to pick them up from the Ted Stevens Anchorage International Airport and bring them to their front door, where friends had left a welcome home sign and food.

Schaefer said she’s been amazed by the kindness from friends and neighbors who delivered supplies for the last few weeks as they recovered. Officials from the health department checked on them twice daily over the phone and monitored their symptoms. When Susie Schaefer’s COVID-19 test came back positive, Dave went to a drive-thru testing facility in the Valley. He had also contracted the virus.

Susie Schaefer worried that Dave, who is 72, would have a harder time recovering, but said she is thankful he had milder symptoms than she did. As the days went on, their symptoms waned.

The couple was cleared by the state Department of Health and Social Services on Wednesday and declared recovered.

Schaefer said she’s felt a sort of survivor’s guilt, knowing there were others on the same ship who did not survive the virus and also knowing that so many people are still living in fear.

She said she worries about a second round of illnesses happening as businesses begin to reopen, but she also understands how much the virus has hurt families financially.

“This can boomerang. We still need to practice the personal distancing and the safety precautions," she said. “I think it’s also very important to reach out to people that you haven’t spoken to or you haven’t seen,” she said, adding that while others may not be physically sick, they may be struggling with the isolation of sheltering in place.

Schaefer said she never thought she’d contract the virus and said it’s important that others continue to follow guidelines because it’s not always obvious that someone has COVID-19.

“I guess I had a sense of immortality or invulnerability — oh, this won’t touch me, I’m gonna wash my hands, I’m going to avoid people that are coughing, I’m going to use sanitizer, I’m going to hydrate, I’m not going to touch things — I thought I was being safe. I did everything that I knew to do to be safe, but it’s sneaky. You don’t see it coming.”

Schaefer said she’s happy to be home and grateful to be healthy again. The couple plans to donate their plasma for antibody research when they become eligible in the next few weeks.

“It was scary because we heard of so many deaths and so many going on ventilators, and why we escaped that, I don’t know — it’s got to be a prayer from God," she said. "I have no logical reason for it ... but I’m so grateful that we didn’t.”