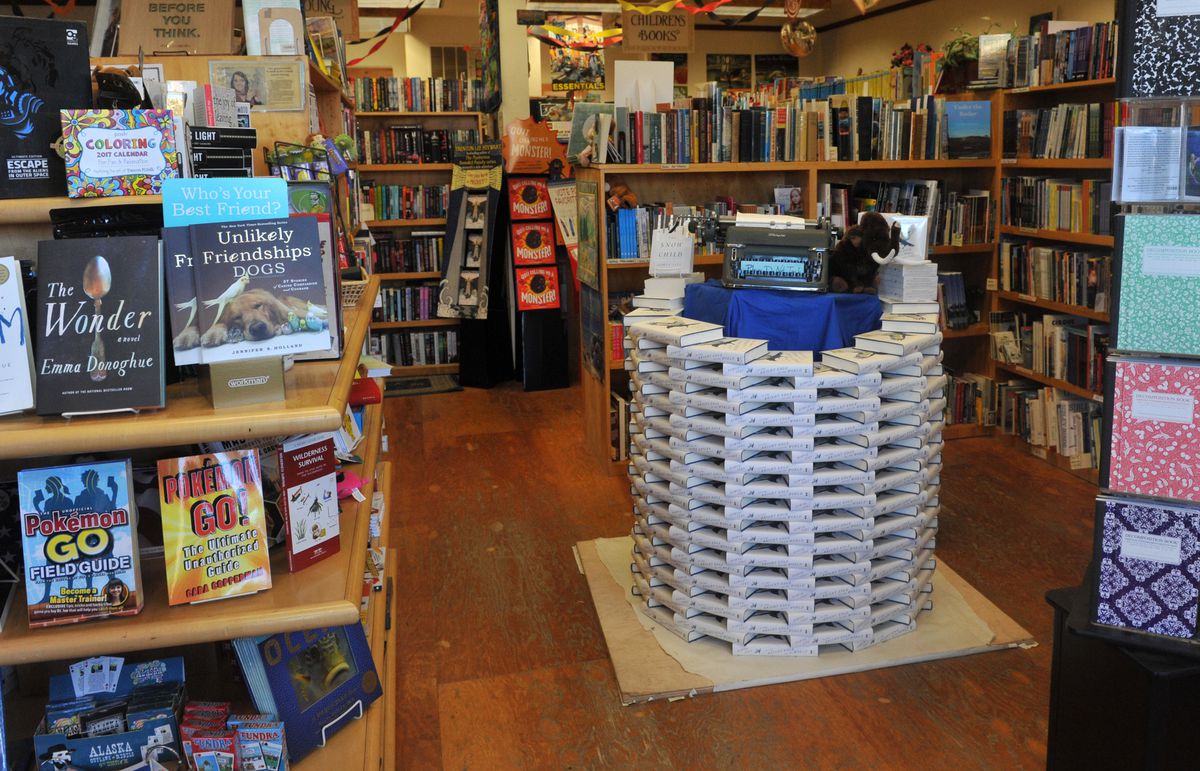 A display at Fireside Books in Palmer, Alaska, as photographed on Thursday, September 29, 2016. The store keeps running out of five books removed by the Mat-Su School Board from English reading lists. (Bob Hallinen / ADN archive)

A display at Fireside Books in Palmer, Alaska, as photographed on Thursday, September 29, 2016. The store keeps running out of five books removed by the Mat-Su School Board from English reading lists. (Bob Hallinen / ADN archive)

PALMER — The Mat-Su School Board will again debate the removal of five respected literary works from some English courses — this time with what may be a slew of public comments.

The agenda for the school board’s May 6 meeting was published Thursday. It includes an “action item” to rescind the vote.

The 5-2 vote last week removed the following books from upper-level elective English reading lists: “The Great Gatsby” by F. Scott Fitzgerald; “Invisible Man” by Ralph Ellison; “Catch-22” by Joseph Heller; “I Know Why the Caged Bird Sings” by Maya Angelou; and “The Things They Carried” by Tim O’Brien.

The board also voted to remove The New York Times’ The Learning Network as a teaching resource; journalism students can still use the newspaper.

The book removal decision inspired a wave of support for the works and brought negative national attention to this New Deal farm colony north of Anchorage.

[The five books removed from Mat-Su English electives and why]

This week, she found herself defending the books and her community during interviews with CNN and NBC.

Sarah Welton, one of the two “no” votes, said she requested that a motion to rescind the decision be placed on next week’s meeting agenda.

Welton this week said she wanted to give the public a chance to weigh in. The original vote, on an amendment that didn’t require public notice, occurred at a live-streamed meeting with no public access due to COVID-19 restrictions.

Welton thinks there are enough board members willing to “put it on the table for time certain so that more discussion can be had ... I think," she said. “But I could be very wrong.”

School board president Tom Bergey did not return several requests for information last week and this week. No other board members wanted to comment.

Member Jeff Taylor, in an April 25 Facebook post criticizing the word “ban” to describe the board’s action, said he appreciated “all the civil emails, phone calls and texts. I have never been threatened like I have been over the last 48 hours, or called so many derogatory names. It’s ok. I’m certain this topic is not laid to rest and shall be discussed more.”

The book decision bars teachers from using the five works in elective — as opposed to required — English classes. School libraries can keep the books on shelves. It appears that teachers in other classes could still use the books as reading materials.

Several board members acknowledged they hadn’t read all five books.

Their decision was based on a broad review of English elective reading materials by instructors and community members that recommended the five books stay on reading lists while identifying them as potentially “controversial” for reasons including violence, sexually explicit material, strong language, “anti-white” messaging, references to rape or incest, and racial slurs.

The review of the English elective reading materials is a standard district process but was specifically generated by a board request last year, a district spokeswoman said. The amendment last week focused on those five books.

Board members who voted in favor of removing them said they didn’t know why books labeled controversial would be taught in schools, and questioned whether parents were involved enough to track reading lists.

Washington Post book critic Ron Charles wrote that, while watching a video of the board meeting, “you can actually see America’s IQ points circle the drain and slip away.”

Online military news source Military.com called “Catch-22” and “The Things They Carried” iconic works of literature about war and castigated the board for trying to shelter teens from concepts like satire and flawed authority figures in a state with the country’s largest percentage of veterans per capita.

The New York Times, CNN and NBC carried stories this week describing the board’s action or how it triggered a wave of support for the books in the local community.

The Mat-Su rooted, Grammy-award winning band Portugal. The Man called the decision “narrow-minded and un-Patriotic” and offered to mail copies of one or more of the five books to any student or parent in the Mat-Su district. Students who wish to receive a free copy of one or more of the banned books can email sticksandstones@portugaltheman.com.

That is why we are putting out a standing offer that if any student/parent in the Mat-Su Borough School District wants a copy of one or more of these books, we will mail them to you. Just hit us up at sticksandstones@portugaltheman.com.

A “Banned in the Borough" Facebook page involves a digital book club (324 members as of Thursday) that’s reading and discussing all five books.

Fireside Books in Palmer can’t keep the books in stock to meet demand. People are ordering books to be distributed for free to students, Fireside owner Mary Ann Cockle said. Several orders have come from the UK and over the United States.

A female co-worker took a call from a woman who recently moved to Palmer.

“She was astounded. She called the bookstore and asked, ‘Does this happen a lot? I just moved here,'" Cockle said. “She said, ‘No, this is not typical.’”

Members of the public who want to testify by phone at next week’s meeting must sign up no later than 3 p.m. Wednesday by calling or emailing Stacy.Escobedo@matsuk12.us or calling 907-746-9272.