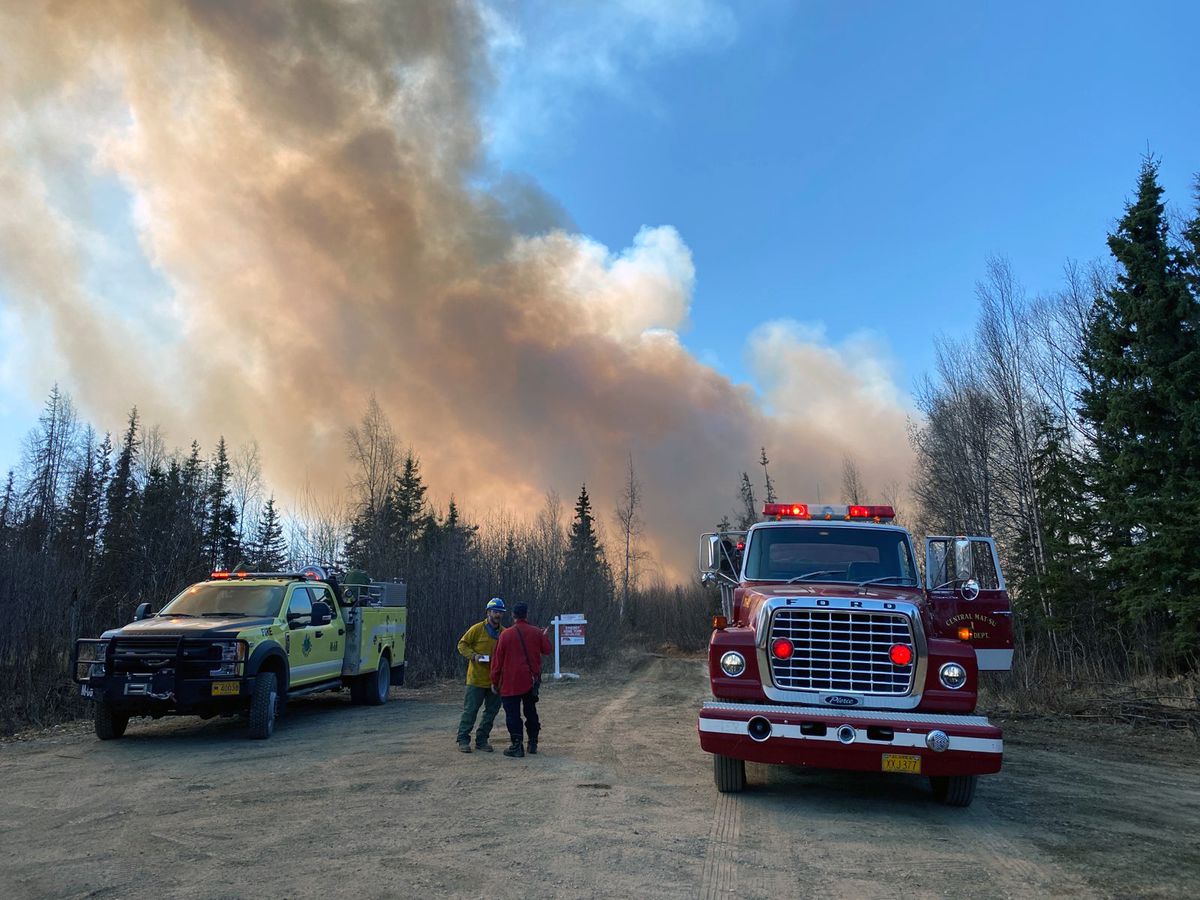 Firefighters from the Alaska Division of Forestry continued working Friday to contain a wildfire between Wasilla and Point MacKenzie that had spread across about 120 acres in less than a day.

Tim Mowry, a public information officer for the forestry division, on Thursday described the Trumpeter Fire as the first significant response of the season in Southcentral Alaska. The forestry division said the fire is human-caused.

The fire was spotted by a pilot just before 4 p.m. Wednesday, and crews from the forestry division’s Mat-Su team located the blaze near South Trumpeter Drive and West New Homesteader Avenue, the division said in a statement.

The fire was initially estimated to be about 2 acres, but it spread quickly because of dry grass and a light wind from the west. The flames had spread to about 50 acres Wednesday night and it was estimated to be about 120 acres by Thursday evening, Mowry said. Firefighters had contained about 40% of the fire by Thursday evening and the growth was due in large part to better mapping.

Two helicopters were being used to drop water on the flames, and firefighters were accessing the area by ATV and on foot. There were 52 people working to control the blaze, Mowry said. Crews camped out overnight and were working Thursday to get water lines around the entire perimeter.

The flames were spreading northwest Thursday, and Mowry said the fire had moved away from a cabin where crews had initiated structure protection efforts the night before.

There was no threat to structures by Thursday evening, Mowry said.

Crews hope to have the wildfire contained in the next day or two, Mowry said. They had previously aimed to contain the fire by Thursday evening, but it was taking more work than initially thought, he said.

Though the fire is human-caused, Mowry said it’s unclear exactly what the source was.

“We’ll be investigating it,” he said. “They’ll try to figure out what the actual cause was, but you’re not far from the residential area and there’s a four-wheeler trail that goes through there, so it’s accessible to people.”

Mowry said it’s not unusual for wildfires to happen after the snow melts and before the grass springs back to life. Dead grass and dried vegetation are quick to ignite if wind carries a spark from a burn pile. Most fires this time of year are human-caused, Mowry said.

The day before the Trumpeter Fire began, firefighters from the Mat-Su Area Forestry office and Central Mat-Su Fire Department responded to a roughly 1-acre fire on Point MacKenzie Road caused by escaped burning debris, the division said. The Tuesday fire was about a mile-and-a-half northwest of where flames began to spread Wednesday, Mowry said.

A helicopter crew responded to the small fire Tuesday, but Mowry said firefighters on the ground had controlled the flames quickly.

Mowry said Southcentral Alaska from Mat-Su through the Kenai Peninsula is at especially high risk for wildfires now because snow has melted in most of the area. There’s a lower risk farther north, where temperatures are still slightly colder.

The state will suspend all burn permits Friday because of wildfire risks. Officials fear there may be fewer resources available to fight fires due to the COVID-19 pandemic.

The state routinely relies on assistance from the Lower 48 to fight wildfires — last year roughly 5,000 personnel traveled from Outside to fight fires across 2.6 million acres. Alaska and national wildland fire response agencies estimated there could be a 30% reduction in firefighter availability this year because of travel restrictions and quarantine requirements.

“I know people don’t like burn suspensions this time of year. They want to burn their yard debris, brush and stuff from the yard,” Mowry said. “But this is sort of an abnormal year, so we’re just trying to do what we can to protect our firefighters and to protect the public and the one thing we can do is try to reduce human-caused fire.”