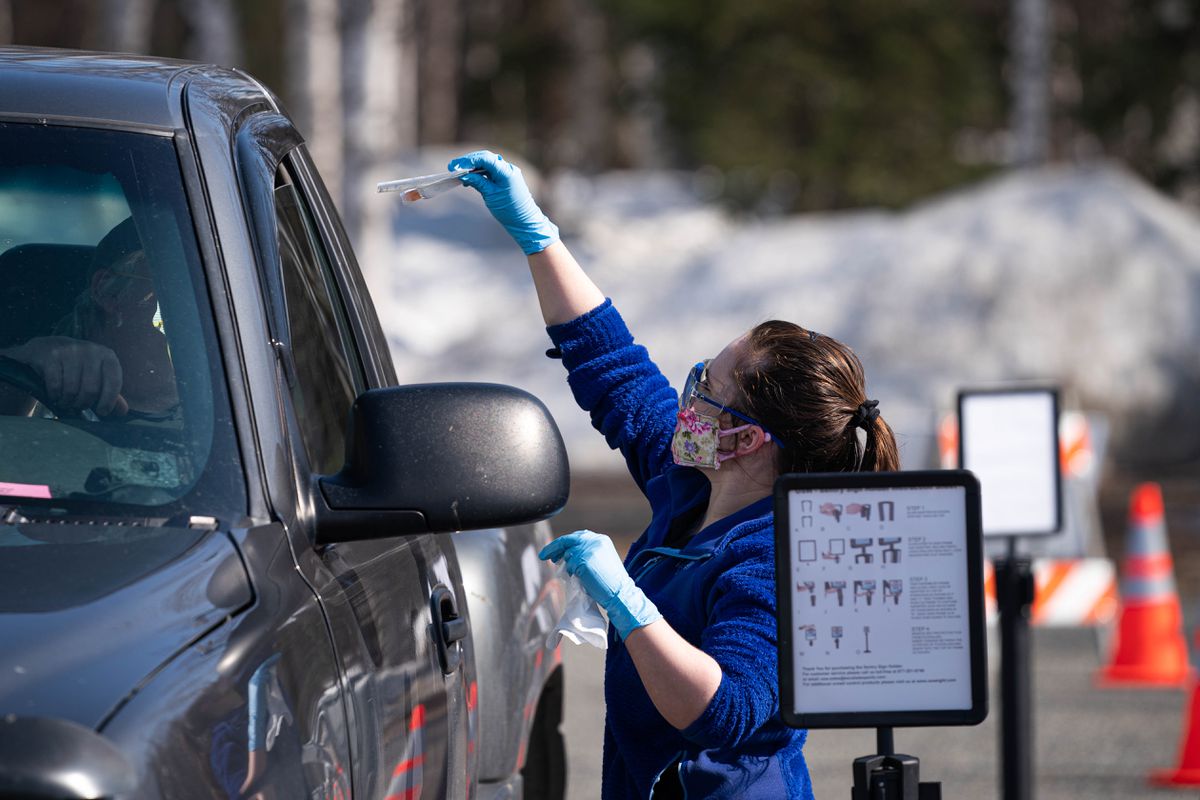 “You want it to be in your nose for 15 seconds, OK?” Hall told him, half-yelling through the mask covering her lower face. “You wanna tickle your brain, that’s how it’s going to feel.”

The man rolled up his window, inserted a swab in each nostril and twirled. Then he put on his hat, put on his face mask, and handed back a tube containing his sample.

“Feel better!" Hall said as the truck slowly drove off.

For four hours Thursday, any residents from Trapper Creek to Willow with symptoms of the virus got tested for COVID-19 in the Su Valley Junior/Senior High School parking lot without leaving their vehicles or paying a penny. They also didn’t need a doctor’s referral, though they were encouraged to call the Wasilla public health center before coming.

The pop-up operation was the result of a partnership between state public health nurses and the Matanuska-Susitna Borough.

There were no long lines. Just under 20 people participated, officials say.

But the event was noteworthy because it marked the first free mobile testing in the state, according to Tim Struna, chief of Alaska’s public health nursing section.

“The goal of this is within the Mat-Su community to really kind of figure out where are there access barriers and then bringing that testing capacity to the people,” Struna said.

There is free drive-up testing in Anchorage, Ketchikan, Juneau, Fairbanks and Bethel. It’s easier for residents there to get to those established sites, officials say.

In more rural areas, “the tables kind of turn and we need to go to them,” he said.

Health officials say broad testing is crucial as Alaska’s economy reopens to helps track outbreaks and isolate people with the virus and others who came into close contact.

The Matanuska-Susitna Borough, the state’s second largest municipality with 106,000-plus residents, lags behind statewide testing rates though numbers are improving. As of Thursday, there were 21 known positive COVID-19 cases in Mat-Su: nine in Palmer and 12 in Wasilla, according to the Alaska Department of Health and Social Services.

Most of the West Virginia-sized borough’s population, and the COVID testing facilities, are clustered around the cities of Palmer and Wasilla.

The upper Susitna Valley, a more rural area of unconsolidated communities scattered along the Parks Highway, has no drive-up testing. Patients at Sunshine Community Health Center can get tested at locations near Talkeetna and in Willow.

“We’re just giving people these other options,” said Sonja Engle, a public health nurse based in Wasilla who coordinated the event.

Because patients stayed in their vehicles and tested themselves, health workers needed less protective equipment than they would otherwise, Engle said.

The partnership hopes to conduct additional mobile testing events in other more rural parts of Mat-Su in the coming days and weeks, she said. “We’re hitting the outskirts.”