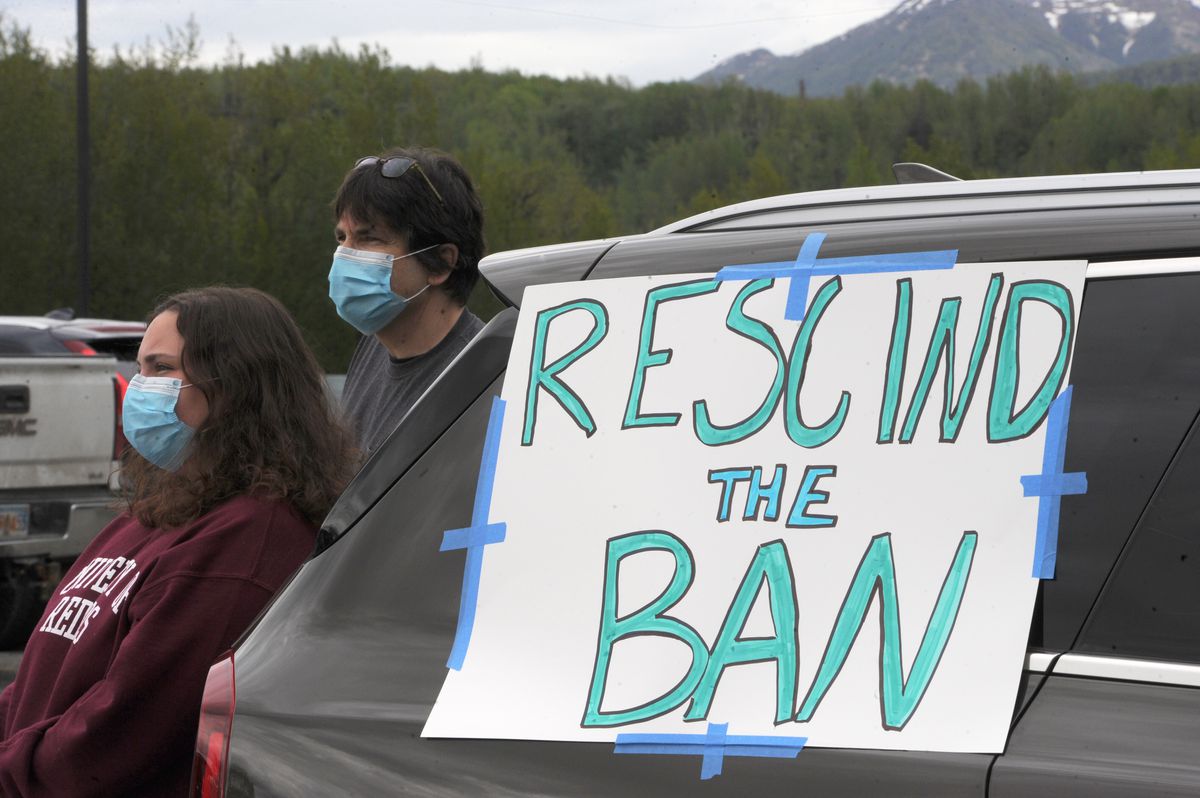 Olivia Beck and her father Jim Beck attended the rally outside the Matanuska-Susitna School Board meeting in Palmer on Wednesday, May 20, 2020. (Bill Roth / ADN)

Olivia Beck and her father Jim Beck attended the rally outside the Matanuska-Susitna School Board meeting in Palmer on Wednesday, May 20, 2020. (Bill Roth / ADN)

PALMER — The Mat-Su School Board on Wednesday rescinded last month’s contentious decision to pull five literary classics from English elective reading lists and tabled it until next year to develop better policies for controversial materials.

The 6-1 vote followed a lengthy, emotionally charged discussion that included a reading from one of the books — “I Know Why the Caged Bird Sings” by Maya Angelou — by a board member who described a rape scene as “sexual content,” prompting an outraged reaction from the school district’s outgoing top staffer.

The school board rescinded the decision so members would have time to align their policies with state statute when it comes to parental authority to remove students from school activities — including which books they read.

The board won’t address the issue again until May 2021 after policies for parental involvement are retooled.

The original decision in April drew instant claims of censorship from parents and community members and got panned by national media outlets. It also generated a wave of support for the books, all of which are read in the Anchorage School District: Angelou’s “I Know Why the Caged Bird Sings”; “The Great Gatsby” by F. Scott Fitzgerald; “Invisible Man” by Ralph Ellison; “The Things They Carried” by Tim O’Brien; and “Catch-22” by Joseph Heller.

The board also removed a learning resource from The New York Times from creative writing classes; that was part of the decision overturned Wednesday.

The vote came after a two-hour discussion that included board member Jim Hart reading aloud a section of Angelou’s book where she describes her rape as a child.

First, Hart warned parents to remove children who might be sensitive to the topic. Then he read the passage, which includes details of the act.

“This is a question of what happens when you do get one child feeling trapped having to read this, discuss this,” Hart said once he was done, adding he had no problems with “Catch-22” or “The Great Gatsby.” “But when you talk about sexual content ... it really does come down to propriety.”

“I am deeply offended by that. That is not sexual content. That is the rape of a child,” Goyette said, her voice raised. She added a teacher would have read the entire book, not just that excerpt, and provided context and guidance for students.

She told Hart his reading was “an unnecessary insult.”

“No,” he said. “It was for the record so people knew exactly what we were referring to. It was perfectly legitimate.”

Hart ultimately voted to rescind the book removal, however, along with all but one board member. Ryan Ponder was the lone no vote.

Ponder criticized the inaccurate “narrative” that the board’s prior action constituted a ban. He said district policy gives principals and superintendents the authority to approve a book that’s not on approved reading lists.

“The facts are the books can still continue to be taught,” Ponder said. “There was no action taken by the school board to change that authority.”

But the overall decision was motivated by a legal finding announced by school board president Thomas Bergey. As debate began, Bergey said he and the school district attorney found the board lacked a procedure for parental involvement in decisions like the book uproar, which conflicts with state statute.

“So we do need to rescind this,” he told the board.

Several other members voiced their support for removing the books before voting to rescind the decision, expressing concern that parents’ wishes were ignored and that some of the books could traumatize students.

Discussion at times veered into personal territory. Sarah Welton, one of two original votes against the book removal, described a long-ago relative killed for being a witch after laughing about the charges in court. Ole Larson, a retired Department of Corrections employee, described the hanging death of a sex-abuse victim in jail to explain his belief “I Know Why the Caged Bird Sings” shouldn’t be taught to high-school students who might have similar trauma that’s brought up by the book.

“We don’t want to create a victim,” Larson said. “If a child does do something because of this, we will never know.”

Alaska-rooted Grammy-winning rock band Portugal. The Man cheered the decision Wednesday night, calling it "a massive blow to arbitrary moralism.” The band previously offered to buy copies of the removed books for students.

The vote was rescinded! We have a long way to go, but this was a victory for all of humanity, and a massive blow to arbitrary moralism. Power to the teachers, parents, and students. I’m proud of our home and we will be staying on this issue until the policies change. pic.twitter.com/aSOdI6mdmb

Outside the district administration offices in Palmer on Wednesday evening, protesters in cars and trucks filled the parking lot to protest the book removal as well as other school issues.

The board at a meeting May 6 heard three hours of public comment, most supporting the books, but opted to adjourn without a vote.

The book removal vote in April was part of the district’s curriculum review process that incorporates the public and school staff. This review focused on elective English courses: poetry, creative writing, journalism, American and British literature.

Seventy-six people, almost entirely parents and guardians, supported the reading materials, according to documents obtained in a records request by the Alaska chapter of the American Civil Liberties Union. Some said they thought the list was too limited and not diverse enough.

One school board member asked for additional information about books that might be considered controversial, district officials say.

The district provided the five at the center of the uproar while indicating they were recommended, the documents show. The district provided a summary of general challenges, which included violence, sexually explicit material, strong language, “anti-white” messaging, references to rape or incest, and racial slurs.

Parents can choose to request alternative readings if they object to books on the list, district officials have said. Two board members, however, said parents told them that process was cumbersome and shamed their children or gave them more work.